Behold, the true power of the X-Box (1 Viewer)

Given the success of the Gamecube thread, I thought I'd pick a couple of killer X-box screens to highlight. These are all X-Box exclusives. Most of these are just high res shots, I've heard nothing mentioned about HD. 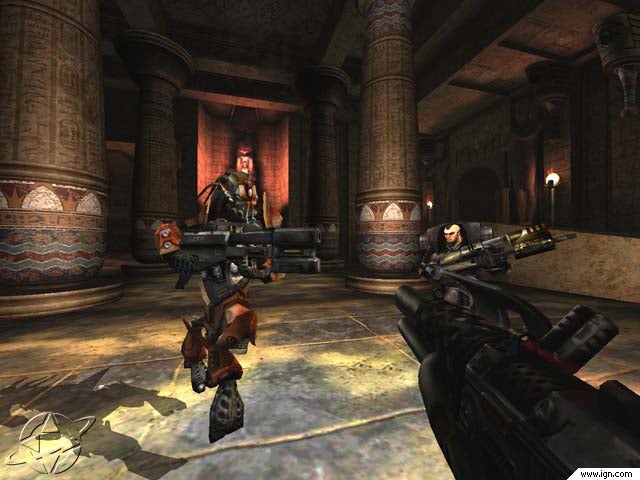 UNREAL CHAMPIONSHIP -- Awesome detail on the pillars. Graphically, it's right between Unreal Tournament and Unreal 2. I've read this supports 4 player split-screen AND 16 player online gaming. Considering that most FPS have lousy console control schemes, I'll be interested to see how Digital Extremes works around the limits of a controller. 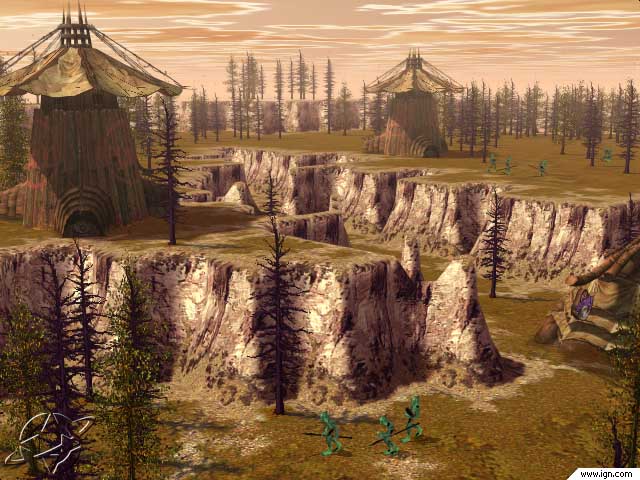 MUNCH'S ODYSSEY -- This looks really unique, with amazing environmental detail. If the gameplay is up to par, it could really be something. 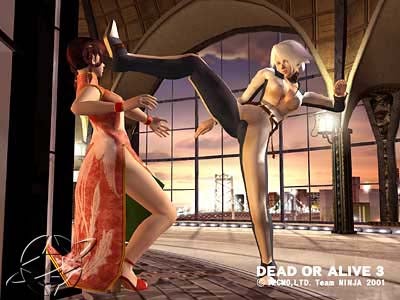 DOA3 -- OK, I'm not really into fighting games, but this just looks WICKED. I can't believe the background detail. This is easily the best looking launch title by a huge margin. 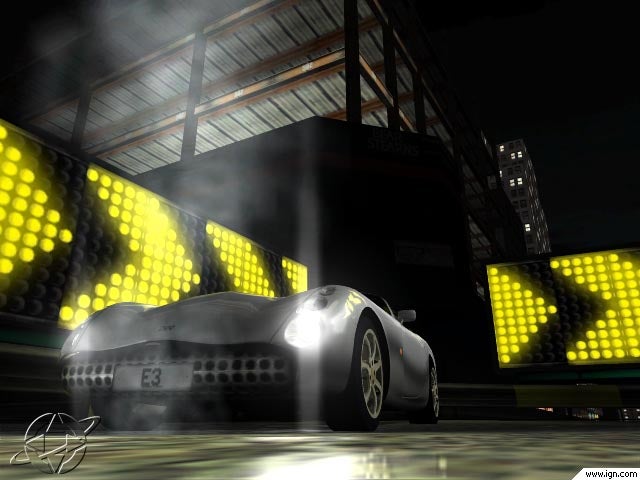 PROJECT GOTHAM -- Great reflection and fog details, it looks gorgeous. If it has the depth of GT3, Microsoft could have a serious competitor on their hands.
With a PS2 installed base numbering somewhere around 10 million, where will the X-Box and Gamecube make up ground? Publishers won't ignore those numbers -- your thoughts?

That's what MS says, but it IS a pretty big title so who knows.

Mmmm, mmmm, mmmm, very tasty, Adam! It's funny--for the longest time I had that Munch shot as my wallpaper at work, and people just couldn't believe it was a screenshot from a GAME!
If these Xbox and Gamecube games play as pretty as they look, I think we are all going to be some deliriously happy gamers come November! Save your sick days now, folks!

I'm just going to say this for the record:
Many games for the X-Box are not exclusive. Sega called it "premiering," which is like a movie premiere. It starts in one movie theater, then it is all over the country a week later. Dead or Alive 3 could end up on GameCube and/or PlayStation 2 by the end of 2002, as could every Sega game coming for the X-Box and many other games, including the Matrix games. Unless you can get a statement from Microsoft that says they own the exclusivity of a game forever and not just for 6 months or so, then you shouldn't call them exclusives.
Where did I read this? I think it was at videogames.com or in Electronic Gaming Monthly.

Already, I am convinced it is time to dump my PlayStation. I wonder if there is a market for these things on Ebay?

I thought I also read that MS is going to give Shiny (the house developing the Matrix titles) a boatload of cash for a 6-month exclusivity period and X-box only features.
As for Munch, its creator has slammed other consoles (PS2) in several interviews, so it won't be going anywhere.
Unreal Championship uses a newer incarnation of the Unreal engine, which was tailored to the X-box. Unreal tournament barely runs on PS2, so it probably isn't technically possible.
Project Gotham is an in-house MS title, I believe -- which precludes it from being anywhere.
As for DOA3, yes, it IS an exclusive -- Itagaki himself (designer) has said so. It will NOT be anywhere else, sorry.
[Edited last by Adam Nixon on August 02, 2001 at 10:38 PM]

MS gave Shiny, or rather Shiny's publisher, Interplay, a loan - something like 6 million dollars, I think(?).
The Project Gotham shot looks nice - and I saw some screens today that look even better than that one. Also, I'm not sure if comparing PG to GT3 is fair, as they seem to be two different types of racing games. The true comparison will come when Sega unveils SegaGT2, hopefully at the fall TGS.
Personally, I'm extremely curious about this Bruce Lee game being developed. Let's hope they've learned from the Bouncer's mistakes.

Only a few big titles will be exclusive to the X-Box, and PS2 is sure to have a viable equivalent, such as Tekken 4 and Virtua Fighter 4 on PS2 and DoA3 for X-Box. The thing I don't get is why the Munch guy slams the PS2 when the GC is easier to program for than the X-Box. Also, they were making the game for PS2 and changed solely because of the amount of time and money being spent on the difficult programming, he didn't switch for more powerful hardware. Personally, I think they were a little whiny, plus they had a lot of the game done before they switched to the X-Box.
I don't see what kind of features the Matrix could have only on the X-Box. Maybe it will have better graphics, High Def and 5.1 output, but what else? Maybe it will have a trailer for the movies or some other special feature that they already agreed apon with MS.

With a PS2 installed base numbering somewhere around 10 million, where will the X-Box and Gamecube make up ground? Publishers won't ignore those numbers -- your thoughts?

It's going to be a very interesting Christmas next year. Not this year - as was shown last Christmas period, the new machines will fly off the shelf, each punter will be a few games, and that'll be that. Next year is the year that the battle will be really fought - the PS2 games will be nice & matured, with the GC & XBox just really starting to get it together.
One prediction for this Christmas: publishers are betting the farm on *big* game sales increases over last year... I think they're going to be disappointed again - I feel there are going to be too many high profile games battling for sales on the shelves... The 'smaller'/middle of the road games will get squeezed out even more... I still think one big publisher will go bust this financial year.
------------------
Nothing In Particular
Click to expand...

Very nice.
Munch's Odyssey probably won't do it for me though. I found the other Oddworld games inventive yet dull.
What is the genesis of Project Gotham's title? Is that a working title or is that the final name of the game? I assume it takes place in NY locals?

Just thought it was worth noting, but Abe's Oddyssee was Part 1 of the series, Abe's Exoddus was a side story to make money between 1 and 2, and Munch's Oddyssee is Part 2 of the series.

Well, I blew it on Project Gotham. Guess I should have gone to Bizarre's website and researched. I also have to agree with BrianB -- Lorne Lanning (the Munch honcho) seems to complain about everything. Oddworld Inhabitants is still complaining about the difficulty of programming for the PS2, which they probably could have gotten past if they tried. As for Shiny, the "rumor" I read reported that the X-box versions of Matrix will have superior online capabilities. However, with relatively few exceptions (some of the better Lucasarts PC titles or Goldeneye), most movie licenses bust -- no matter how cool the property is.
This whole "exclusivity" thing is what irritates me the most about X-box. Is MS going to actually release 1st party titles under the Microsoft label? It's kind of hard to tell what is proprietary.
At least that's one plus about Nintendo, you won't find Zelda on anything else.

One of the reasons why I love the PS2 and GCN so much is because they have many game series' that will be released on them no matter what. Games like Mario, Zelda, Perfect Dark, Final Fantasy, Resident Evil, Silent Hill, Metal Gear Solid, and some other less known titles. The PS2 also has some games announced for it that are ports of arcade or PC hits (like Time Crisis 2 with the new GunCon) that we all know will be great. Even though some games will end up on the X-Box from the PS2, they will be available on a PS2 first, plus people who own a PS2 can get those games that are "premiering" on X-Box if and when they are made for PS2. Also, if the X-Box for some reason totally bombs, a lot of the games for it that would be released later next year that are in development would probably end up on GCN (because of the easy programming).
One thing I would be interested in is if you could hook a bunch of X-Boxes up to a LAN and use one of them as a server for the rest, and possibly have 4 players on one X-Box. If they made it so you could hook 3 X-Boxes together with a game on a LAN and have 12 players on 3 TVs, that would be pretty cool.
You must log in or register to reply here.