Adapted from a young adult novel series with some superficial similarities to Twilight, Beautiful Creatures doesn’t manage to fill the void left by the end of that massively popular franchise, due in large part to its leaden pacing. Its high definition presentation has few faults, but coupled with an unremarkable collection of extras, it makes for a less than enchanting Blu-ray release. 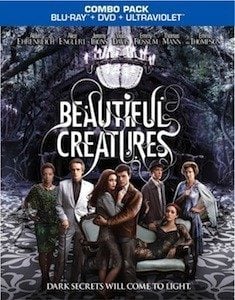 It’s hard being the new kid in town, but even harder when you come from a family with a questionable pedigree. That’s the challenge immediately facing 15-year old Lena Duchannes (Alice Englert) when she starts school in the insular community of Gatlin, South Carolina. As the niece of the town eccentric Macon Ravenwood (Jeremy Irons), she’s immediately painted as a Satanist like her uncle, and the more vocal, fundamentalist Christian parents – led by the apoplectic Mrs. Lincoln (Emma Thompson) – won’t stand for having such a person in the same school as their children.While almost everyone seems eager to burn Lena at the stake, her classmate Ethan Wate (Alden Ehrenreich) is instead drawn to her. In fact, the two have been dreaming about each other for the last two months, but any attempt to explore their otherworldly connection is met by Macon’s equally supernatural guardianship. Though he’s not the devil worshipper everyone says he is, he is indeed a witch (or Caster, as they prefer to be called), and he’ll have no mortal boy jeopardizing the safety of his beloved niece.As Lena approaches her 16th birthday, she’ll face what’s called the Claiming, an event that will reveal her true nature as either a creature for good or one for evil. Though male Casters have the power to make up their own minds on the matter, females apparently do not, and Lena fears she’ll be claimed by the forces of darkness, just like her cousin Ridley (Emmy Rossum). Indeed, all signs point to Lena being an especially powerful Caster in the making, so it’s critical she avoid any negative influences like what Ethan seems to represent. However, dark forces are also aware of Lena’s vast potential, and the heartache brought on by a doomed romance with a mortal could be the perfect catalyst to bring her to their side.Anyone who belittles Beautiful Creatures as an attempt to capitalize on the vacuum left by the end of the Twilight series wouldn’t be wrong. On a superficial level, there’s at least a few similarities between the two properties, most notably its young adult novel origins and the angsty, supernatural teen romance that drives the story. The latter, along with the Southern environment, also conjures up similarities to the True Blood TV show, though being targeted to a PG-13 audience means the movie has some boundaries for how far it goes with the commingling of species.The lack of an original premise or cookie cutter plot aren’t the problem though, nor are the paper thin characterizations that have Academy Award nominees occasionally chewing the scenery with their most syrupy Southern accents. No, it’s the monotonous pacing and hesitance to embrace its inherent camp that ultimately kill the movie. Since no one in their right mind expects this kind of thing to be any good, it should at least be fun, and fun is definitely lacking through most of the film’s two-hour run time.Outside of a couple exceptions – mainly involving the veteran British players who seem to relish every opportunity to lay it on real thick – the story is dominated by the dull-as-dishwater leads who seem to just take their time getting to the point. Even their most over-the-top scene together, punctuated by a libido-fueled lightning strike that sets a wooden structure aflame, doesn’t create much heat. In fact, a little over halfway through I dozed off and had to backtrack 20 minutes just to say I’d watched the whole thing. Other viewers – regardless of their age – won’t be so beholden.

Framed at 2.40:1 and presented in 1080p with the AVC codec, the high definition transfer has few faults. Blacks are nicely inky, colors are rich and stable, and contrast displays the full range of values without compression. Detail is also quite nice, though a touch inconsistent with a handful of shots that are noticeably soft, most likely from focusing errors. Outside of the film’s sometimes pedestrian visual effects and color grading, there’s also no signs of excessive digital processing or manipulation.

The bonus material offers few surprises, as it’s made up of the usual glad-handing electronic press kit featurettes that repeatedly explain the plot and characters. The couple exceptions are the pieces about the visual effects and wardrobe, which are interesting, but probably won’t elicit repeat visits. A couple alternative viewing formats and trailers finish off the largely perfunctory set of extras.From Book to Screen (3:58, HD): Adapting the novel and what drew the cast and crew to the material.The Casters (3:22, HD): Explains what the supernatural beings are all about and highlights the major figures in the society.Between Two Worlds (4:17, HD): Describes the film’s relationship between the two leads and the central conflict driving the story.Forbidden Romance (3:12, HD): More about the two main characters and their inescapable love.Alternate Worlds (5:17, HD): A look at the film’s visual effects work.Deleted ScenesTrailersUltraviolet Copy: Redeem by May 21, 2015.DVD Copy

Warner Home Video conjures up a pleasing high definition presentation for its release of Beautiful Creatures, but the feature ultimately fails to enchant. The special features go more for quantity than quality, resulting in a Blu-ray that’s hard to recommend on just about every level.

Cameron Yee said:
a little over halfway through I dozed off and had to backtrack 20 minutes just to say I’d watched the whole thing. Other viewers – regardless of their age – won’t be so beholden.
Click to expand...

The TV & theatrical previews left me feeling very uninterested in this film and it appears I was correct. Can there be a more damning review of a film? It literally put the reviewer to sleep.
You must log in or register to reply here.
Share:
Facebook Twitter Reddit Pinterest Tumblr WhatsApp Email Link