Two very good movies from Russian director Kantemir Balagov with Russian audio and English subtitles. In Beanpole it is 1945 the war is over 2 Russian women who bonded together fighting in an artillery unit try to adjust to life in Leningrad. In Testona a couple has been kidnapped a ransom note has been sent to family members. Notifying the police is out of the question for the tight nit community they live in. 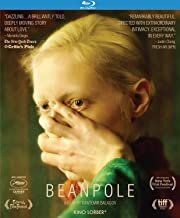 For those unaware and the OP doesn't mention it, these two movie titles were released on Blu-ray this week by Kino.
J

Kantemir Balagov's dour feature BEANPOLE about two female Russian soldiers returning to Leningrad in the aftermath of WWII was shortlisted for last year's Best International Film Oscar (it didn't make the final five). The tall lanky Iya is the title character (played by Viktoria Miroshnichenko) who is joined at a military hospital by Masha (Vasilisa Perelygina). The pair share a perverse bond that only gets deeper and darker as it goes along. And, darkness is at the heart of BEANPOLE. The Russians lost an estimated 25 million of its people during the war so its little surprising that Balagov depicts a population full of despair and hopeless. A time and a place where suicide and accidental death barely seem to register in their emotions. Iya is affected by so severe a PTSD that she is given to fits of catatonia. Masha's wounds are more outward, but no less deep. The acting is good, the production sound and Balagov shows a command of the medium, but his screenplay (co-written with Aleksandr Terekhov) is suffocating. That pressure is surely part of the construct, but, its so constricting here that there is little room for dramatic growth. Much of it feels like miserabilim for its own sake. Even when a few revelations are made towards the very end, they barely register on an emotional level. BEANPOLE is a well made picture, but one that is too constrained to be truly effective.
You must log in or register to reply here.