Looks like the creator of Mr. Robot will take on rebooting Battlestar Galactica a second time for NBC's new streaming service, Peacock.

From the report: "Glen A. Larson created the original series for ABC in the late 1970s, while NBC Universal TV produced the acclaimed Ronald D. Moore-run revamp which ran from 2004-2009 on the Sci-Fi Channel. Esmail has reportedly been in touch with Moore, currently showrunning Starz’s “Outlander,” who blessed the idea because of Esmail’s love of the first reboot."

I'm not sure that I am sold on the idea of another re-imagining of this story. I'm not dismissing it out of hand, but probably need to hear more about it.

Unfortunately, the idea of having to subscribe to yet another 'service' to view the program lowers the probability of me viewing the series. (Feel like I'm beating a dead horse here with regard to yet another subscription service, but that is kind of where we are at right now.)

I hear ya! I hold the previous reimagining of BSG in very, very high regard, but like all great works, I love seeing what other talented creative voices can do with that work. If it's awesome, great. If it's not, I can always watch either of the previous versions to get my BSG fix

Also, I understand the NBC streaming service will have both ad supported and subscription-based offerings, which could help. But the landscape is becoming terrible fragmented.

You know, it's a crazy idea, but I would really enjoy a recast "second season" of the original series. Have it pick up after "The Hand of God" and continue on as if the original series were still on the air. Not the proposed second season where Athena is disfigured, Sheba is killed and Apollo and Starbuck switch roles, but a logical extension of the first year.

What happens to Baltar? Do the Galacticans follow up on the earth transmission? What about Count Iblis and the Pegasus?

It'll never happen, but I would really like it. Unless it sucks.

I enjoyed the original Larson series, and absolutely loved Moore's version. So I am curious to see what a new version can offer. Would, like Scott suggests, the series go back to the original in terms of aesthetic? Does seem kind of crazy, but never underestimate the power of nostalgia. Purely speculative, of course.

I've seen Moore's version of BSG around three times and yeah, an excuse for a fourth viewing wouldn't be a terrible thing.

But I am curious about the new version.

In before they change the helmets again.

In my house, BSG 2.0 is sacrosanct. That said, so is Esmail.

Mr. Robot is absolutely DRIPPING with '80s references, so it would be right up Esmail's alley. Yet...I dunno. This is like somebody doing another version of The Fly or The Thing. When a remake manages to be more classic than the original and you still want to remake it again, you’re setting yourself up for failure. I guess we'll see, here.
Last edited: Sep 17, 2019

If the Cylons are in then I'm in but I won't subscribe to another streaming service, so hopefully this will eventually be available in other formats.

It's just the Chief slowly losing his mind out of desperate loneliness as he wanders from the landing site in Africa up to northern Europe to die.

I'm utterly bewildered by this news. I'm probably interested, but I don't see subscribing to the Peacock service so it's probably moot.

ScottRE said:
You know, it's a crazy idea, but I would really enjoy a recast "second season" of the original series. Have it pick up after "The Hand of God" and continue on as if the original series were still on the air. Not the proposed second season where Athena is disfigured, Sheba is killed and Apollo and Starbuck switch roles, but a logical extension of the first year.

What happens to Baltar? Do the Galacticans follow up on the earth transmission? What about Count Iblis and the Pegasus?

It'll never happen, but I would really like it. Unless it sucks.

This continuation would probably get a big initial viewership if the first episode included that cute mechanical dog getting blown up by a laser blast.

Mr. Robot is so great that I will watch anything that Sam Esmail is involved with.

IT's not much of a surprise but on Twitter, Esmail said

BSG fans, this will NOT be a remake of the amazing series
@RonDMoore
launched because... why mess with perfection? Instead, we’ll explore a new story within the mythology while staying true to the spirit of Battlestar. So say we all!
Click to expand...

DaveF said:
...but I don't see subscribing to the Peacock service so it's probably moot.
Click to expand...

As someone else said further up (and from earlier news reports that I've seen), NBC's service will have a FREE version of their service (supported by advertising), so if you can put up with ads (just like on regular TV), I can't see simply being on a streaming service being a reason not to watch.

Now, being a reboot of a reboot... no matter how good this guy is, do we really need another version of Galactica already? Maybe Universal should drag something else out of the vaults that hasn't already been remade already.

EDIT: I was composing this before Travis R's post that now appears directly above mine. A different story in the same mythology? Sounds at least less lazy than a reboot, but as someone else said, it better have Cylons! I'm sure Universal will expect there to be Cylons in it, though.

How about a Battlestar Pegasus series? 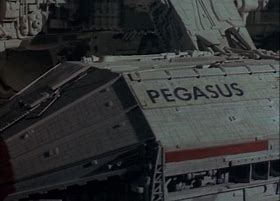 You could play in the BG Universe and not piss off fans of either series.

And Ad Supported free services don't always time the ads to fit in where ad breaks should be. Often they are every 5 minutes and run the same ads five times in a row. Facebook is just as bad - every time I see the Nissan Leaf commercial, I get this strong urge to punch the girl having the "wow" moment, If you know the ad I mean....

Also being discussed in the TV forum.
You must log in or register to reply here.