They say that you cannot judge a book by its cover; by the same token, you cannot judge a movie by its title. Batman vs. Robin is a pleasantly entertaining animated Batman feature that surpasses its pedestrian title. The morose Dark Knight that filmgoers appreciated so much in the live-action films directed by Christopher Nolan returns in this animated sequel of sorts to the Son of Batman(2014) direct to video release. 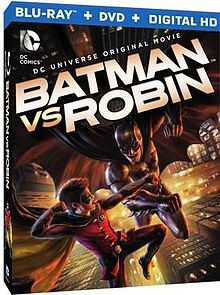 Batman vs. Robin takes up somewhat where Son of Batman(2014) concluded. Damian Wayne, the son of Bruce Wayne and Talia, daughter of Ra's Al Ghul, has become the new Robin. Damian's lineage on both sides of his family has gifted him with great natural abilities, but also made him precocious and inclined to challenge authority. Another masked individual, Talon, takes Robin literally under his wing and attempts to manipulate Damian's natural lethal tendencies for the worse.

Talon is, in fact, the enforcer for the Court of Owls, a secret society that has guided and manipulated Gotham City for centuries. The malevolent guidance of Robin by Talon puts Robin in direct opposition to his father, Batman. The identity of Robin being the actual child of Bruce Wayne, rather than merely his ward, provides some interesting new subtexts of heredity vs. environment in the Batman legend. Damian Wayne alternately, and simultaneously, loves and resents his father. Dick Grayson, aka Nightwing, is also involved in this struggle between father and son, with interesting results since Dick was the first Robin, and Bruce's whilom ward.

The animation style of the film is somewhat angular with fine line-work in the modern Oriental animation style. Batman vs. Robin is an adaptation of the "Court of Owls" storyline originally published in the Batman comic book series in 2012. The screenplay is credited to acclaimed comic book writer J.M. DeMatteis, with credits in recent years in such animated series as Batman: The Brave and the Bold, Justice League Unlimited, and Legion of Superheroes. The voice talent is excellent, with Jason O'Mara(Terra Nova) as Batman, Sean Maher(Firefly) as Dick Grayson, David McCallum(The Man from U.N.C.L.E.) as Alfred, Stuart Allan as Robin, and even "Weird Al" Yankovic as the Dollmaker. Kevin Conroy, erstwhile voice actor for Batman, makes a welcome return as Thomas Wayne, father of Bruce.

Although rated PG-13, Batman vs. Robin seemingly squeaks by with that rating; the serious tone of this animated feature is never more apparent than the scene in which Alfred Pennyworth blasts away with a shotgun with seemingly lethal force against a squad of enforcers from the Court of Owls. Batman vs. Robin is a very good Batman feature recommended for adults, but not necessarily children, due to its intense tone and subject matter.

Batman vs. Robin is presented using the AVC codec in a 1.85:1 screen aspect ratio. Colors are vibrant and compression artifacts are minimal on the Blu-ray, with the only real flaws being the aliasing visible on the fine line artwork of the animated figures. This is never apparent on the static backgrounds, which are lush and detailed, but appears often on the fine lines of the detailed figures. The angular aliasing is expected on DVD, but disappointing when it is visible in 1080p. It does not really distract from the presentation, and probably would not be visible at all if this feature had been created in a more traditional, blockier animation style.

The English DTS-HD MA 5.1 audio does not disappoint. The audio had excellent dynamic range with discreet use of directional audio. The audio really carries a punch during the action sequences, and the mix has no apparent defects, with dialogue always audible over music and effects in the audio mix.

The wealth of special features includes all of the following:

Audio commentary: This feature length commentary is provided by creative director Mike Carlin, supervising producer James Tucker, and director Jay Oliva. The commentary will be of interest to anyone who has read the comics on which this film was based, as the commentators discuss the changes made to this film adaptation.

Gotham City's Secret: The Mythic Court of Owls(31:25): This featurette has Scott Snyder, writer of the "Court of Owls" storyline in the comics, speaking about his influences in creating this plotline.

The Talons of the Owls(14:03): The producers of this film join with writer Scott Snyder to discuss Talon, the putative enforcer for the Court of Owls.

Sneak Peek at Justice League: Gods and Monsters(11:08): Footage from the animated feature due for release on Blu-ray and DVD in July of 2015 with producer Bruce Timm and director Sam Liu.

"Super-Rabbit"(8:15): Bugs Bunny cartoon produced in 1943 as a parody of the Fleischer Brothers' Superman cartoons presented in 1080p.

Trailers for Son of Batman(1:21), Lego DC: Justice League v. Bizarro League(1:35), and Flintstones: WWE Smackdown(1:36).
Also included are a DVD and a paper insert with a validation code for Ultraviolet for those consumers enamored with storing their media in the ether.

Batman vs. Robin is a very good Batman animated feature directed more to adult sensibilities than children. The stylized animation is aesthetically pleasing, even if the aliasing in the video presentation does not give full service to the animators' efforts. The audio is first-rate, and the special features are worthwhile, especially the animated episodes from the DC Vault and the inclusion of a Bugs Bunny cartoon from 1943.

A digression: I have one criticism with the special features, which is the presentation of the animated episodes of Batman, Superman, Brave and the Bold, and Young Justice. The episodes themselves are excellent, but the presentation is dismal. It is disappointing enough that these classics from the "Vault" are not presented in high definition, but the fact is that the transfers provided are not even the best standard definition versions that the studio has in its possession. These episodes actually look better on their respective SD DVD releases than they do on this Blu-ray. It actually appears that the versions included on this Blu-ray are derived from master tapes, which is most evident at the beginning of the Superman episode which displays the "Closed Captioning for the Hearing Impaired" logo(compare this with the DVD release, which has higher quality video presentation but does not have that logo superimposed over the opening credits.) Presentations from the "Vault" on other releases have had the same problem.

If the studio is listening, please know that I love the inclusion of classics from the "Vault." Please continue to include these on future animated releases. I ask only that you make the minimal effort to include the highest quality version of the episodes included for the transfer. I really enjoyed the inclusion her of "Super-Rabbit" in high definition, and encourage the studio to include bonuses like this in future releases.

Batman vs. Robin is an excellent animated feature recommended for adults but too intense for most children. I will look forward to future DC animated releases if they are all the same high quality as this one.

Tuesday at 9:41 AM
Colin Jacobson