Batman Unlimited: Monster Mayhem continues the adventures of Bruce Wayne/Batman in a near future Gotham City first introduced in Batman Unlimited: Animal Instincts. The near future depicted herein is very similar to the one in Batman Beyond, which was a deliberate artistic choice by the creators, as set forth in the special features. Fortunately, the same talent behind the first Batman Unlimited film return for this one for an animated Batman film appropriate for all ages. 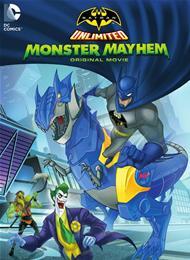 Following the escapes by Solomon Grundy and Silver Banshee from Arkham Asylum, the Joker appears on the scene to lead them, along with Clayface and the Scarecrow, in the Clown Prince of Crime's quest to release digital laughter, a computer virus, into Gotham City. If the Joker succeeds, digital laughter will make inoperable all of Gotham City's technology.

Like the first Batman Unlimited film, Batman Unlimited: Monster Mayhem is a direct to Blu-ray/DVD movie designed more for all ages than some of the more adult-oriented superhero animation being produced under the aegis of Warner Premiere. Although the material is toned down to be suitable for all ages, the film is not so juvenile as to be dull for an older audience. The introduction of the Joker into this alternate future Batman is a welcome addition.

Heath Corson(Justice League: War) returns as the screenwriter for this latest entry in the Batman Unlimited series, and Butch Lukic(Batman Beyond) returns as director, and Kevin Riepl as composer. The score by Riepl is noteworthy for building the dramatic tone of the film.

Batman Unlimited: Monster Mayhem is presented in a 1.78:1 aspect ratio in 1080p with the AVC codec. Video quality on the Blu-ray is excellent. This animation style, which is created in good part by computer, displays visible aliasing on the fine line animation style of the figures, but this seems to be a byproduct of the animation rather than a flaw in the transfer. The color palette is very rich and vibrant on this transfer, which was a deliberate creative choice by the producers since this film is aimed towards a younger audience than some of the other DC animated films.

The English DTS-HD MA 5.1 is exceptional, with excellent use of directional audio used discreetly at certain points. The dialogue, music, and effects are blended well with dialogue audible when appropriate.

Gotham of Tomorrow: Designing a Future World(11:24): This featurette has the creators discussing and demonstrating the influences of Syd Mead and Batman Beyond in creation of this futuristic Gotham City.

DC Nation Shorts: These shorts are good viewing for all ages. Titles include the following:

DC Comics Vault: Included is an episode of Batman: The Brave and the Bold - Mayhem of the Music Meister!(23:08).

The Blu-ray/DVD set includes a paper insert for digital HD with Ultraviolet which promises that you can "Watch It Anywhere!"