Batman Unlimited: Animal Instincts posits a new universe in which the Bruce Wayne version of Batman is still in his prime in a near future Gotham City similar to the one in Batman Beyond. The Flash and Green Arrow also pop up in this Bladerunner-type of future world to help Batman against the Penguin and a Doom Society of animal villains called the Animilitia. This original animated movie benefits from the same talent behind the scenes that has created Batman Beyond and Justice League Unlimited. 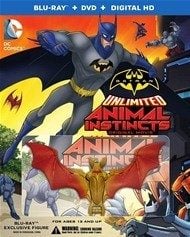 In a futuristic Gotham City that resembles Tokyo, Batman(Roger Craig Smith) must unravel a series of crimes being committed by the Animilitia, consisting of Cheetah, Killer Croc, Silverback, and the Man-Bat. When Bruce Wayne and Oliver Queen(Chris Diamontopoulos) meet multi-millionaire Oswald Cobblepot(Dana Snyder), pieces fall into place regarding the source and cause of these crimes by the Animilitia. Green Arrow and the Flash join Batman, Nightwing(Will Friedle), and Robin Red Breast to combat the Animilitia and prevent the destruction of Gotham City.

Batman Unlimited: Animal Instincts is a direct to Blu-ray/DVD movie designed more for all ages than some of the more adult-oriented superhero animation being produced under the aegis of Warner Premiere. Twenty-two 2 minute shorts are scheduled to follow via digital distribution with another film set in this universe scheduled to premiere later in 2015. These animated films are all tied in to the Batman Unlimited line of action figures forthcoming from Mattel. A coupon for $5.00 off of an action figure is included in this package.

Batman Unlimited: Animal Instincts represents a good effort at a Batman animated feature for all audiences, however, I believe the DC Nation shorts included in the special features may be even more appealing to children, and perhaps to adults as well. The DC Nation shorts include talents from SpongeBob Squarepants, and have some of the same all ages appeal, perhaps even moreso than the main feature.

Batman Unlimited: Animal Instincts is presented in a 1.78:1 aspect ratio in 1080p with the AVC codec. Picture quality on the Blu-ray is excellent for the most part. Colors are particularly full and rich. The only perceptible flaw is the visible aliasing on the fine line animation style of the figures, which may simply reflect the manner of production of this animation.

The English DTS-HD MA 5.1 seems flawless. Directional audio is employed particularly well in this mix. The right blend exists between dialogue, music, and effects such that dialogue is always comprehensible. The score composed by Kevin Riepl(Gears of War, Aliens: Colonial Marines) is certainly given an ideal presentation.

Penguin: High Society Criminal(12:51): This featurette traces the comic book history of the Penguin and talent from this film comment on Oswald Cobblepot's role in Batman Unlimited: Animal Instincts.

DC Comics Vault: Included are full episodes of Batman: The Brave and the Bold: Super-Batman of Planet X!(23:01) and Gorillas In Our Midst(22:36).

The Blu-ray/DVD packaging for this review included a posable Fire Bat action figure in the packaging. Also included is a paper insert for digital HD with Ultraviolet which promises that you can "Watch It Anywhere!"

Batman Unlimited: Animal Instincts is a moderately entertaining animated film designed for all ages which ties in to the Mattel toy line. The film has a vibe not unlike Batman Beyond, which will be appealing to fans of that series. The video presentation is good, and the DTS-HD MA 5.1 audio has notably fine directional audio. The special features are particularly worthwhile, especially the DC Nation shorts which prove that less is more, since each one is no more than a minute or so in duration but leaves you wanting more. The episodes included of Batman: The Brave and the Bold are also worthwhile, even if aliasing is particularly noticeable in these episodes. Although Batman Unlimited: Animal Instincts is kid friendly, do not be surprised if your kids get more replay value out of the special features, like Super Pets and Batman: The Brave and the Bold, than the main feature.