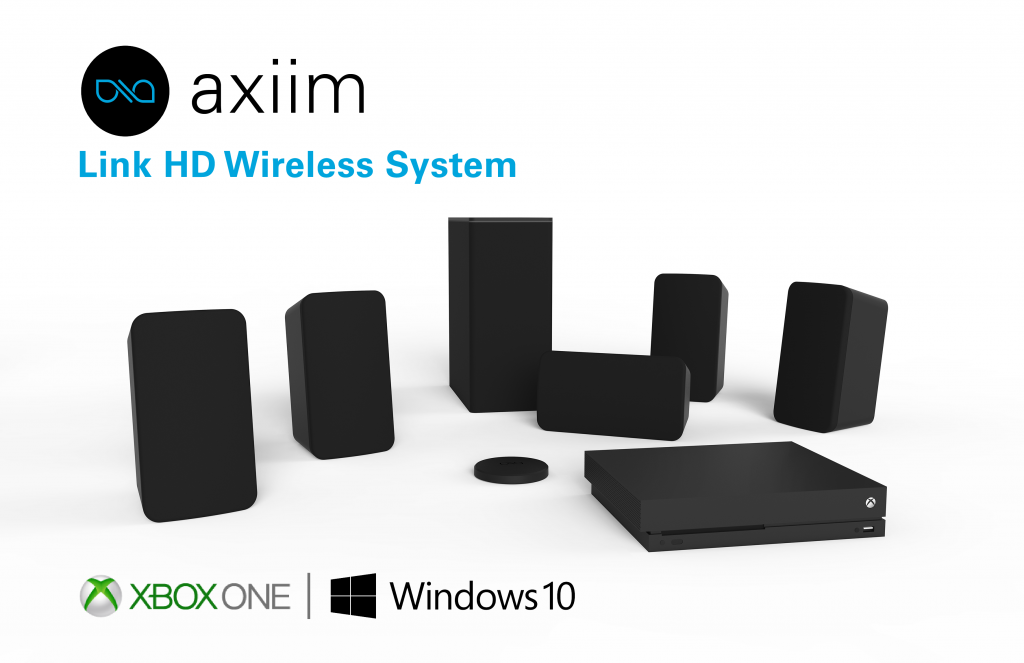 If you can't get by without your surround sound fix while waiting to set up your dedicated room, or just need that experience in a restricted workspace, then this tidy little solution might be for you. Axiim has announced the first wireless home theater solution for Xbox One and Windows 10 PCs, known as the Axiim Link HD wireless speaker system, and will be demonstrated for the first time at CES 2018 at Sands Expo.

The package includes a Link transmitter, which is a compact, multi-channel home theater device that connects to an Xbox One or Windows 10 PC via USB cable to allow up to 7.1 wireless audio channels. Setup of the system should only take a few minutes.

According to Axiim, the system is the first and only Wireless Speaker & Audio Association (WiSA) compliant multi-channel audio solution for Xbox One and Windows 10 PCs, and is guaranteed to deliver reliable and uncompressed audio transmission between the Link and wireless speakers. The Link transmitter will also work with all other WiSA compliant brands, leaving the consumer to choose which speaker system will optimize their own environments. The sleek box itself can be placed almost anywhere, while the wireless architecture ensures no more miserable spaghetti of wires behind the desk or across the bedroom floor.

The base of the unit is also magnetized, so it can attach to the back of your TV, and is finished in a matte black or white rendered soft-touch material, giving you a further option to fit your décor or suit practical needs.

"As the fidelity of gaming has improved, so too has the production quality of audio, which is now as important an element of gaming as the film visuals of video games and the mechanics that drive play," said Tristan Veale, Market Analyst, FutureSource Consulting. "Both Xbox One S and Xbox One X come with a built in 4K UHD Blu-ray player and HDR support, reinforcing the importance of visual and audio fidelity for gaming."

The Link also gets the USB 2.0 High Speed treatment with 480Mbps bandwidth to transmit eight channels of uncompressed 24bit/96kHz audio, and both power and data are transmitted over this connection. A Micro USB connector means the Link can sport a low profile while a Bluetooth Smart module allows connection to iOS and Android mobile apps for speaker setup and EQ. You can also use your Logitech Harmony remote, as Link includes IR.

Sounds like a nifty proposition for some movie bingers and gaming junkies, but no price or street date is available yet. Let us know if you get a chance to audition them at CES, or if you're planning to add a system like this at home.