A young woman, in search of her lost sister, awakens on the shore of an island in director Mark Atkins' latest exploitation actioner, Awaken, starring Natalie Burn and a host of 1980s action sidekicks, including Robert Davi, Michael Pare, and Vinnie Jones. The result is an entertaining callback to the low-budget action thrillers of the late 1980s and early 1990s. 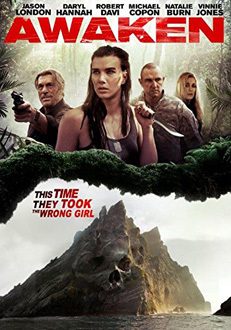 Billie Kope (Natalie Burn, The Expendables) awakens on the shore of a strange island. As she regains consciousness, she has flashbacks to the events leading up to her abduction, remembering that she entered a bar, passing around a photo of a man she is tracking, getting into a fight with some locals, and then blacking out. She then encounters a young woman being chased by camouflaged soldiers, and as she is about to chase them down to save the woman, she is stopped and led to safety by Nick (Michael Copon), Chloe (Augie Duke), and Todd (Philip Tan). They take her to their camp to meet Quentin (Robert Davi, Die Hard), who has been on the island the longest. He warns her to stay with the group and offers her shelter in one of the huts. Over dinner, she meets the rest of the inhabitants, all who have been abducted in a similar fashion and dumped on the island, including Berto (a very creepy Edward Furlong) and a would-be special forces soldier Stitch (Daz Crawford). Billie convinces Stitch, Todd, and Nick to build a raft and escape to the nearby island, only to find themselves captured by Sarge (Vinnie Jones, Snatch) and dumped back on the island. Rich (Jason London), the man living in the mansion on the nearby island, has been monitoring the inhabitants on a closed-circuit feed, only to be interrupted by Kat (Christa Campbell, Drive Angry) notifying him that Mao (Darryl Hannah) is on her way to the island. Determined to escape, Billie, Nick, and Stitch manage to steal a boat and make their way back to the other island, this time landing at the mansion's docks, where they make a gruesome discovery as to why they were abducted, ending in an eventual shootout between Mao's thugs, Rich's soldiers, and the abductees.

One of the secrets to a good exploitation film is for the director and the film to say to its audience exactly what it is and intends to be - a quick and cheaply made piece of entertainment, and nothing more. And Awaken is just that, a movie that could have been made in the 1980s by Roger Corman or Golan-Globus for drive-ins and grindhouses, eventually making its way to Blockbuster on VHS. Director Mark Atkins, a veteran from Asylum (the studio that brought you such SyFy "classics" Sharknado and Zombie Apocalypse) has put together a great cast of young actors, plus a healthy dose of 1980s veterans, using them effectively to tell his story as efficiently as possible. Natalie Burn (who also co-produced the film) displays her balletic prowess in many of her fight sequences, even though she occasionally sounds as if she's stumbling over her dialogue, while Michael Copon is very good as her eventual love interest. The weak link in the cast is probably Darryl Hannah, who often seems lost as the supposed mob boss Mao and mother of a dying daughter. Effectively adding to the 1980s vibe is the score by Kays Al-Atrakchi and Brian Ralston, which is reminiscent of the work the late James Horner created early in his career for Roger Corman on films such as Humanoids from the Deep and The Lady in Red.

Unfortunately, ARC Entertainment is releasing Awaken only on DVD and Digital HD. The good news is that the DVD looks pretty good when upscaled on my Sony BDP-S5100 blu-ray player to my Samsung UN60F7100 HDTV. Colors are natural and consistent throughout. Contrast is also very good, with deep blacks that appear to exhibit minimal crush and whites that never seem to blow out. Fine detail was a big surprise, providing textures in the sand and even in Natalie Burn's hair.

Awaken is presented in a lossy Dolby Digital 5.1 track, encoded at 448 kbps. This is a fairly immersive track, with good surround activity and a nice, deep low-end. Dialogue is intelligible and never gets lost in the mix, while the percussive and Latin-influenced score by Al-Atrakchi and Ralston comes through quite nicely.

The only special feature on the disc is the official trailer.

I would have preferred if ARC had released Awaken on Blu-ray, and possibly thrown in some bonus features, even a brief EPK on the making of the film. Otherwise, the film is a great way to spend 90 minutes and munch down a big bowl of popcorn.

Is the audio/video rating really only 1 for each? The text would seem to indicate a decent (higher) rating.

Malcolm, thanks for catching that. They should both be "4".


The review has been corrected.