At War With The Army Blu-ray Review

At War With The Army (1950) has the distinction of being the first film featuring Dean Martin and Jerry Lewis in starring roles, following their supporting roles in My Friend Irma (1949) and My Friend Irma Goes West (1950). Although it is not the best of the Martin and Lewis feature films, At War With The Army includes enough glimmers of the comedy team's strengths to recommend it. This Blu-ray release of the film, which has long ago lapsed into public domain, is an adequate high definition release, but not exceptional by any means. 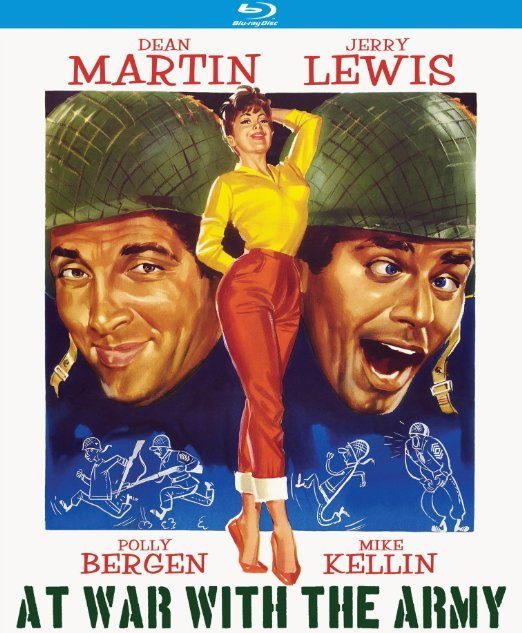 Dean Martin and Jerry Lewis play Army Sgt. Vic Puccinelli and Private Alvin Korwin, respectively, a couple of former nightclub entertainers stationed on a base in Kentucky in 1944. A talent show is approaching on the base, but bigger forces are at play on the world stage. Puccinelli wants to see action but sees his efforts thwarted by his appointment as a warrant officer. Korwin wants a furlough to visit his wife and newborn child which finds him in drag at one point while being propositioned by a superior officer.

Martin and Lewis do not share a lot of screen time in their first starring feature, but the highlights of the film reflect their shared scenes. The duo predictably appear together on stage at the talent show, and these scenes demonstrate their rapport and chemistry. Martin and Lewis are surprisingly good in their vignette in which they do impressions of Bing Crosby and Barry Fitzgerald in Going My Way (1944), and these scenes from the talent show, within the film, give the audience a sense of the slapstick, pathos, and song that were the hallmark of their nightclub act that launched Martin and Lewis to fame.

At War With The Army is based on the play of the same name by television writer James B. Allardice, whose later credits included Alfred Hitchcock Presents, The Munsters, and Gomer Pyle, U.S.M.C. The expansions to the play made in this film to accentuate the talents of Martin and Lewis seem to play to the duo's strengths, but perhaps to the detriment of the narrative. The film script has some amusing sequences, including one with a malfunctioning soda machine, but it plays more like a series of loosely connected scenes rather than a well-devised plot characteristic of many other stage adaptations. Lewis is at the top of his game here with his mastery of slapstick, and it is interesting to see how Martin had not yet developed his confidence as an actor in this film, since he became a very good actor within the next few years in his collaborations with Lewis, and later in his solo career.

At War With The Army is presented in 1080p in the AVC codec in a 1.37:1 aspect ratio.
This film has been in the public domain since the later 1970s, and the original film elements were apparently not preserved with all due care.

On the plus side, blacks are solid with excellent shadow detail and very nice fine detail through most of the film. The exceptions are some stock footage in the first reel of the film and some dupe footage here and there in the remainder of the film. On the negative side, there are multiples scratches and other damage evident to the emulsion, which is worst in the first five minutes or so and then diminishes for the remainder of the film, with most damage becoming evident shortly before and following what would be the reel changes.  Some gate weave is also apparent occasionally.

This transfer appears to be from the same source as the HD transfer created by Film Chest in its DVD release in 2014. At War With The Army on Blu-ray is only a modest improvement over that DVD release. The only substantial differences between this Blu-ray release and the 2014 DVD is that the Blu-ray is not scrubbed free of film grain as the DVD was, but the Blu-ray shows only minor improvement over the DVD in fine detail as the DVD comes very close upscaled to 1080p. This release is certainly recommended to anyone who does not already have the DVD since the Blu-ray is priced competitively with the DVD and does have better picture and sound, although the improvements are minimal. Film fans who already have the 2014 DVD release will have to decide whether the upgrade is worth it, since the differences are minor.

Audio is presented in 2.0 DTS-HD. Since the film elements have not had optimal storage, nor benefited from full state-of-the-art restoration, and this is a film from the early 1950s, the audio is lacking in dynamic range and fidelity. The music sequences have the best audio, for what it is worth, although Lewis' rendition of "Beans" early in the film highlights the limitations of the audio with some minor hiss and popping. The audio may not be terrible, taking into account the provenance of the elements and their age, but it is not excellent by any stretch of the imagination, merely adequate.

This release does not include any special features.

At War With The Army appears on Blu-ray with an adequate video and audio presentation. This transfer is a small improvement over the 2014 DVD release, but minimally so. This release is certainly recommended to Martin and Lewis fans who do not already have the 2014 DVD, but only fans who demand the highest quality of presentation will find an upgrade worthwhile from last year's DVD release. It is unfortunate that Warner Brothers and Paramount have not yet released any of the duo's VistaVision films yet on Blu-ray, since those films have the potential to be excellent in terms of video presentation. This Blu-ray release is a no-brainer for anyone who does not have the DVD, as this release is competitively priced and can be obtained at present from many vendors for less than the price of the DVD.

This one is also significant because it was the first and only film in which Martin & Lewis tried to go independent and broke away from Hal Wallis. Allegedly the success of this film led to Hal Wallis taking their roles as comic stars rather than secondary comic relief more seriously.


As such, this film is somewhat similar to their Colgate Comedy Hour (their other venue away from Hal Wallis) in which it is almost entirely sketch comedy with a vague semblance of a plot. Like the TV variety show, this was essentially the closest a film came to emulating their stage routines and stage personas

The only substantial differences between this Blu-ray release and the 2014 DVD is that the Blu-ray is not scrubbed free of film grain as the DVD was, but the Blu-ray shows only minor improvement over the DVD in fine detail as the DVD comes very close upscaled to 1080p
Click to expand...

I'd consider that a major upper hand for this release. The main reason I didn't bother with the Film Chest release (or any FC release for that matter)