James Foley’s At Close Range fashions a dysfunctional father and son relationship that is impossible to tear oneself away from so increasingly fetid does it become as the film runs. The movie works wonderfully as a character piece with strong ensemble work from a host of actors who would go on to very big things in show business, and with a great feel for time and place and solid direction throughout, the movie is often electrifying even if the ending seems just a bit of a letdown. 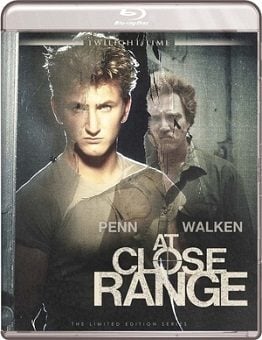 Out of school and out of a job (and thus always short on funds), young Brad (Sean Penn) is intrigued by his father’s (Christopher Walken) rogues' gallery of cronies (Tracey Walter, R. D. Call, David Strathairn, J.C. Quinn) who pull midnight thefts and seem to be living a free and easy lifestyle. When Brad meets sixteen-year old Terry (Mary Stuart Masterson) and is instantly smitten, he knows he needs money to make a life for them, so he gets drawn into his father’s “occupation.” After the first heist goes well, Brad brings in brother Tommy (Christopher Penn) along with some other young friends (Crispin Glover, Kiefer Sutherland, Stephen Geoffreys) who form a kind of junior version of the older gang as they attempt to steal tractors and other farm machinery, but the youths don’t have the expertise to make big hauls and get caught leading to a downward spiral for Brad as his once seemingly close rapport with his father becomes sour and mistrustful with a series of events occurring that seem to be leading to a fatal confrontation between the two of them.

The original story by Elliott Lewitt and Nicholas Kazan has been adapted by Kazan with an eye toward twisting an already tenuous father-son relationship into something truly ugly and destructive. Were Brad smarter, he would have seen early-on that he was merely a tool being used by his dad (a cry for help after being on the receiving end of some buckshot finds the father advising him to look for help from “your woman”), but it takes even more heinous acts for Brad to finally wake up and see the monster standing right before him with a leering smirk on his face and a phony camaraderie masking a snake-like ability to manipulate others to do most of his dirty work. The film’s second half is filled with a series of tragic events including several murders, a rape, and a murderous ambush that doesn’t quite go off as planned (despite the R rating, most of these gruesome acts are adroitly directed by James Foley to generate the maximum suspense and horror with a minimum of bloodshed and outward violence; only that ambush gets really graphic). Director Foley also instills in the movie some interesting local color (Tennessee substituting for rural Pennsylvania) as the kids enjoy hanging around the town square (filmed occasionally from above), a pastoral dip in the local river, and a chase through some impressive corn fields recalls Cary Grant’s hiding out in one in North by Northwest.

The young Sean Penn proves even in the early stages of his career what a riveting screen presence he possesses: tender and tough in parts (though how he survives all those gunshots and the obviously enormous loss of blood takes some terrific suspension of disbelief) and displaying a fearless sense of self that cowers other less worthy characters. Christopher Walken may not fully convince as the father of Sean and Christopher Penn, but his screen presence is likewise strong flaunting cobra-like charm with those evil wheels constantly churning in his head as he looks out solely for number one. (Both Penn and Walken employ perhaps a bit too much whispering and mumbling of lines, and one may need to backtrack or turn on subtitles to catch everything.) Mary Stuart Masterson is also very young but is oh-so capable as the teenager who grows up quickly once she becomes embroiled in the machinations of these gangs. Millie Perkins and Eileen Ryan as the boys’ mother and grandmother respectively (Ryan is actually the mother of the Penns) don’t have large parts, but they ring true throughout (particularly Ryan who speaks little but her eyes and body language say a lot). Tracey Walter is the most vocal and histrionic of the older gang while Crispin Glover of the younger actors acts his usual eccentric teen (with perhaps a bit too much quirk) in a couple of standout scenes.

Filmed in Super 35, the film has been framed at its theatrical aspect ratio of 2.35:1 and is presented in 1080p using the AVC codec. Sharpness is quite excellent throughout, and color is consistently solid with appealing skin tones. Contrast may be a little quirky from time to time, and black levels are basically average or a little above. But no age-related problems with dust or dirt seem to be present in the least. The film has been divided into 24 chapters.

The DTS-HD Master Audio 2.0 stereo sound mix makes excellent use of Patrick Leonard’s background score rich in fidelity but never compromising the dialogue. Atmospheric effects seem more constrained in the mix with less concentration on the available speakers and more focused on the center channel only. No age-related problems with hiss or other artifacts are present.

Audio Commentary: producer Nick Redman hosts an interesting and articulate discussion of the film with its director James Foley. Rather than going scene-by-scene, the two men engage in a fine conversation about the movie, its collaborators, and some of the director’s other projects. It’s a valued extra feature exclusive to this disc.

At Close Range offers a fairly riveting story (based on a true series of events) bolstered by outstanding performances and confident and accurate direction, and the Twilight Time Blu-ray release is of outstanding quality. There are only 3,000 copies of this Blu-ray available. Those interested should go to www.screenarchives.com to see if product is still in stock. Information about the movie can also be found via their website at www.twilighttimemovies.com or via Facebook at www.facebook.com/twilighttimemovies.

Probably it was difficult to get the rights, but yes, i would love it too!

The song is an essential part of this film.

It was even the first thing credited in the end credits!