As Above So Below Blu-ray Review

As Above So Below finds its footage on Blu-ray with a nearly bare-bones edition that doesn’t make this confusing maze of a film any easier to understand. Ostensibly a horror movie constructed from “found footage” of people who are foolish enough to go wandering through the catacombs beneath Paris, this movie wastes a potentially interesting setup and winds up doing one cattle prod jump after another before succumbing to total incoherence at the film’s ending. Given the relative success writer/director Jon Erick Dowdle had with 2010’s Devil, I expected better. But then, we must remember that the prior film was written and produced by M. Night Shyamalan. Clumsy and derivative, As Above So Below is not a release I can recommend, even to horror movie fans. 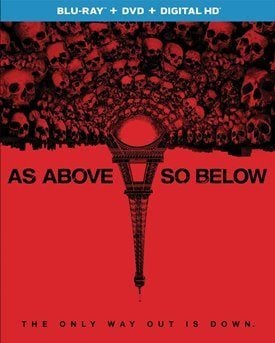 As Above So Below is really trying hard to be a creepy horror thriller. It’s got all the usual tricks in place. There’s the almost completely unknown young cast thrown into a scary situation for no reason. There’s the shaky “found footage” idea so that the movie pretends to have an air of reality. There’s the genuinely disturbing setting of putting everyone into the real catacombs beneath the streets of Paris. And then, by about an hour in, we get repeated cattle prods of evil figures jumping toward the camera while the sound mix throws in a blast of subwoofer to goose the viewer. This is not to say that these tricks can’t work. They can – they just need to be in the service of some kind of a coherent story – something this movie is sadly lacking. Director and co-writer John Erick Dowdle has done effective work in the past – most notably with M. Night Shyamalan’s Devil in 2010, where he was able to use these tricks in the service of an effective script from Shyamalan’s story. This time, Dowdle and his brother Drew are responsible for the script – and the results are, in a word, subpar. There’s a story in here somewhere about the search for the legendary “philosopher’s stone” and how our cast finds themselves looking for it in the catacombs, which actually takes up about an hour of the movie – including material that seems pulled from a variety of earlier films ranging from Devil to Indiana Jones and the Last Crusade. As of about the one hour mark, the hijinks begin, as the various cattle prods go into effect and people begin running around in increasing levels of hysterics. By the film’s conclusion at the 90 minute mark, the story has become so confused that down is literally up and up is literally down. The only recommendation I can give to horror movie fans, even to fans of Dowdle’s earlier work, is that they should watch one of those other movies. The catacombs in this one yield few rewards.As Above So Below was released on December 2nd on Blu-ray and DVD. The Blu-ray includes the movie in high definition, along with a quick 3 ½ minute featurette. The DVD includes the movie and the same extras in standard definition. The Blu-ray includes the DVD edition in the packaging, along with instructions for downloading a digital copy.

As Above So Below is presented in a 1.85:1 1080p AVC encode (@ an average 32 mbps) that does what it can with the found footage look of this production. At the least, the black levels look solid and what detail we can see looks good.

As Above So Below has an English DTS-HD MA 5.1 mix (@ an average 4.4 mbps, going up to 5.7 mbps for the bigger cattle prod moments) that actually provides a fair amount of atmospherics and immersive sound. The higher bitrates appear to be due to the shorter running time on the movie and the lack of almost any extras. An English DVS track is included, as are DTS 5.1 mixes in French European, French Canadian, German, Castillian Spanish, Latin American Spanish and Italian

As Above So Below comes with a 3 ½ minute promotional featurette as its sole extra.Inside As Above So Below – (3:39, 1080p) (AVAILABLE BOTH ON BLU-RAY AND DVD) – This quick featurette includes a visit with the brothers Dowdle to the Parisian catacombs where this movie was shot. There are also a few comments from the lead cast members, who seem relieved to be done with the shoot but do offer the usual compliments to their director.DVD – The Blu-ray packaging includes the DVD edition, which holds the theatrical version in standard definition with Dolby Digital 5.1 mixes in English and French (@448 kbps), and the English DVS track. The DVD includes the featurette from the Blu-ray, albeit in standard definition.Digital/Ultraviolet Copy – The packaging has an insert that contains instructions for downloading a digital or ultraviolet copy of the movie. Subtitles are available in English SDH, French European, French Canadian, Italian, German, Castillian Spanish, L.A. Spanish, Swedish, Danish, Finnish, Dutch, Norwegian, Portuguese, Arabic and Icelandic. A standard chapter menu is included for quick reference. As an appropriate touch, the disc defaults to a jolly holiday greeting when it first spools up.

As Above So Below is unfortunately not that interesting or even that scary of a ride. The “found footage” journey of some really foolish people through the catacombs below Paris frankly doesn’t hold much beyond the usual cattle prods and weirdness to keep an audience involved in what’s happening. And much of what happens here is the kind of thing we’ve seen done before and better elsewhere. The Blu-ray release does what it can to make the movie presentable, but there’s only so much that can be done with this material.

The "found footage" genre has been done to death, no pun intended. I agree with you, this steaming pile of derivative crap is best avoided.

I agree with 'Richard V' -- the genre reached its pinnacle with 'Chronicle' and 'Cloverfield' - two very well constructed and exciting films.

Richard V said:
The "found footage" genre has been done to death, no pun intended. I agree with you, this steaming pile of derivative crap is best avoided.
Click to expand...

First time I saw the trailer, it looked like a studio execs' idea of "The European market needs its OWN found-footage horror movie!", and headed straight for Paris just like all the others.
You must log in or register to reply here.