Director Ron Howard’s Apollo 13 has been released multiple times on just about every home video format that has existed. Universal has now released a 20th Anniversary Edition on Blu-ray, and the results put all previous incarnations to shame. 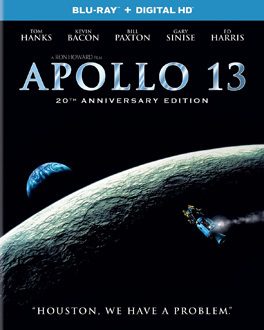 In 1970, the space race was losing steam. NASA had landed on the moon twice already, and when Apollo 13 lifted off, the three major networks, for the most part, ignored it. That is, until an oxygen tank exploded, seemingly stranding the flight’s crew in space as they headed towards the moon, as NASA’s engineers scrambled to assemble a solution to bring the astronauts home safely.

Ron Howard’s Apollo 13 is a fine piece of ensemble filmmaking, a crowd-pleasing entertainment even though it does use dramatic license to make it more interesting and add suspense to an historical event that many may know what the eventual outcome is. There’s not one bad performance in the film, lead by Tom Hanks as Commander James Lovell, Bill Paxton as Fred Haise, and Kevin Bacon as Jack Swigert as the flight crew of the ill-fated mission. They are joined by Kathleen Quinlan as Lovell’s wife, Marilyn; Gary Sinise as Ken Mattingly, the original crew member who figures out the proper power up sequence to get the crew home; Chris Ellis as Deke Slayton, NASA’s Director of Flight Crew Operations; and Ed Harris (in an Oscar-nominated performance) as Lead Flight Director Gene Kranz. Most of Digital Domain’s visual effects work that wowed audiences in 1995 still hold up today, and James Horner’s Oscar-nominated score heightens the drama and tension.

For the film’s 20th anniversary, Universal has gone back to the original 35mm elements and created a new 4K master as the starting point for this Blu-ray release. The 1080p AVC-encoded transfer, which preserves the film’s intended theatrical aspect ratio of 2.35:1, is a major improvement over every previous home video release, including the much-maligned 15th anniversary Blu-ray. Detail is improved dramatically, while still retaining native film grain with no noticeable digital manipulation such as edge enhancement. Colors are consistent and natural. Blacks are deep without crushing. Digital anomalies are virtually non-existent. This is truly a reference-level transfer.

The DTS-HD Master Audio 5.1 soundtrack may not be the slam bang sonic experience most would expect, but the original DTS theatrical track was never intended to do that. Dialogue is directed mostly to the center channel, never getting overwhelmed by James Horner’s score or sound effects. Where the track really shines is during Marilyn’s nightmare sequence, the liftoff, and many of the space flight sequences, with immersive surround and solid LFE. It should be noted that the foreign language options are encoded in DTS 5.1 at the older DVD bitrate of 750 kbps.

Most of the special features from previous home video have been ported over (with a notable exception of the full instrumental score that was accessed from the main menu of the original DVD release and the D-Box track from the 15th Anniversary Blu-ray), with one new (albeit too short) featurette. Note: descriptions of the ported features are from Kevin Koster’s review of the 15th Anniversary Blu-ray.

Apollo 13: Twenty Years Later (1080p; 11:40): Director Ron Howard and Producer Brian Grazer reminisce about making the film and the reactions to the film. New to this Blu-ray.

Audio Commentary with Director Ron Howard: Ron Howard’s commentary from the laserdisc and earlier DVD releases is carried over here, and it continues to be a rewarding one. Beyond his enthusiasm for the project, and his memory of the various people who helped him make it, Howard’s scene-specific comments also reveal the places where he took dramatic license to stretch the truth or simply invent material. One early example is the Apollo 11 launch party , which he used as a convenient way to introduce the main characters in a social setting. The problem here is that this party did not happen – in reality, Jim Lovell watched the launch from Mission Control. Another domestic scene, in which Lovell’s daughter is chastised for her “flower child” Halloween costume (and apparently her appreciation for Jefferson Airplane) is revealed to be an invention. Howard openly admits he designed the scene to reflect the kind of mother-daughter run-ins he had seen in his own home. Howard is apparently unaware that many reviewers took exception to this scene in particular, as it seems to repudiate its only example of the popular culture of the time.

Audio Commentary with Jim and Marilyn Lovell: The second commentary from the laserdisc and earlier DVD releases is preserved here. This one is a scene-specific talk with mission commander Lovell, with occasional laughs and observations from his wife Marilyn, who is watching the film with him. Lovell adds to the discussion of various situations in the film that were either changed for dramatic effect or completely invented. As one example, he notes that the doubt shown toward pilot Jack Swigert was not an issue during the actual mission, but he appreciates that Ron Howard wanted to amplify the tension in the capsule.

Lost Moon: The Triumph of Apollo 13 (480i; 58:05): The original making-of documentary from the laserdisc and the earlier DVDs is included here. It’s an amiable piece, including interviews with all of the cast, as well as Ron Howard and the Lovells. It also has some great on-set video of the crew filming on the looping aircraft used for real on-camera zero gravity. (It’s interesting that the participants here never identify this plane by the name by which it’s commonly known…) Like the film itself, there’s nothing particularly deep here. It’s really just an extended EPK piece in which everyone shows a genuine enthusiasm for the material.

Conquering Space: The Moon and Beyond (480i; 48:25): This documentary, held over from the 2005 DVD, is a general overview of the history of NASA. It covers everything from the first space launches up to the then-current material about the International Space Station. All the various programs (Mercury, Gemini, Apollo, the Shuttles, etc) are dealt with in pretty short order. If you’re looking for an in-depth analysis of NASA’s work, this probably won’t fill the bill. But it’s fine as a quick introduction.

Lucky 13: The Astronauts’ Story (480i; 12:12): Here we have what I would call a misleading title for a featurette. This is NOT an examination of the people who manned the Apollo 13 mission. Instead, it’s a Dateline NBC segment from July 29, 1995 that very quickly recaps the various mishaps that occurred during the mission. (I would venture a guess that this was a promotional segment.) What’s really interesting here is that in just over 12 minutes, this featurette manages to relay the same information we get from the movie, without feeling like it’s been rushed or that we are missing anything. This featurette originally appeared on the 2005 DVD.

U-Control: Two onscreen informational options are available while you watch the feature. The first, The Apollo Era, is a pop-up trivia function that displays various bits of 1970 information, such as the price of groceries and bits of cultural context. The second, Tech-splanations, is a picture-in-picture function that graphically displays computer simulations of various technical issues. One good example is the tank explosion that crippled the spacecraft. When this comes up, the PIP function carefully shows and explains exactly what happened.

Most fans of this film will likely want to upgrade to this new release for the improved video presentation alone. Most of the bonus features are available here, so unless the instrumental score or D-Box functionality are of vital importance, the 20th Anniversary Edition is a no-brainer. Highly Recommended.


I was waiting for a HTF review before I decided to purchase.

With this new transfer I'm getting it.

Oh, excellent. Happy to pick things up at Costco.

For those that care, it appears that the UV version on VUDU is from the 15th Anniversary master, and not this newer 4K remaster.
D

I enjoyed the review, and now I have to see this transfer. I have the 15th, and was probably going to put buying this on the back burner, but I enjoy the film and everyone seems to be singing the PQ praises so...

Be careful if you find Apollo 13 at your local Best Buy. It looks like Universal dumped their overstock of the older 15th Anniversary Edition with $7.50 Movie Cash vouchers for Jurassic World at some locations, but shipped none of the new 20th Anniversary to actual stores!!!

Also, some of the Digital HD codes are either missing or invalid.

Robert Crawford said:
Also, some of the Digital HD codes are either missing or invalid.
Click to expand...

Are you talking about the 15th Anniversary Edition with Movie Cash, or the new 20th?

Todd Erwin said:
Are you talking about the 15th Anniversary Edition with Movie Cash, or the new 20th?
Click to expand...

Ordered this one along with the soundtrack yesterday. Great film.
Can't wait to see the new transfer!!!
You must log in or register to reply here.