International Anyone with Greatest American Hero S1-3 on BluRay (Japan)?

Anyone have this? Can you give me insights on quality, etc....? TIA 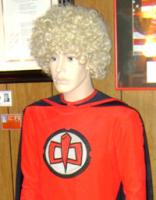 I have the complete series, looks better than the DVDs, but I'm not technical enough to tell you if it's a upscale, etc. I can tell you it does NOT look as sharp and clear as the blu ray editions of the Star Trek: TOS, or The Twilight Zone. Even the recent Battlestar Galactica (1978) beats it in terms of picture quality, but not as much as the first two I mentioned.

No teasers before the the opening credits, but all the original as broadcast music is intact.

It was pricey, but it is the best version of the series that's been released so far. However, I feel the show could look a lot better.

One more thing, the 2nd season episode The Lost Diabo was shot on film but transferred to tape for post production. It was a test by Cannell to see if costs could be cut, that episode looks like crap on Blu ray.
Reactions: Radioman970 and Flashgear
B

Thanks for the info. Does anyone else have this? Perhaps someone who wouldn't mind talking offline? I have a few questions...some in depth, and perhaps lengthy for emails.

Forgot to add that the aspect ratio on the Japanese set is the correct 4:3, however the discs are 1080i, and I know that's a deal breaker for some.

Highly doubtful they can be found anyway at this point. The volumes appear to be OOP, they've not been on Amazon.jp for a long time, or available on CD Japan. A couple of the other usual sites most buy discs from have no listings or "out of stock" shown.

I'm guessing they're upscales of the earlier DVD masters (well, the Japanese DVD masters, since the original music is intact). Too bad. I wouldn't mind a full-on HD release in Region A, but I'm not gonna hold my breath.
B

So nobody else but Scott has gotten this?

I have the first season. As noted above, the video quality appears upscaled and no better than the DVD to my eyes. Unlike the DVD, there is no music replacement, it all seems to be the original audio.

Timothy E said:
I have the first season. As noted above, the video quality appears upscaled and no better than the DVD to my eyes. Unlike the DVD, there is no music replacement, it all seems to be the original audio.
Click to expand...

Running the Japan discs side by side with the Anchor Bay DVDs, the Japan upscales look slightly better than the DVDs. However the improvement isn't enough the justify the $400+ I paid for Japan discs, even with the original music intact.

As for original audio, yes the music is all original, but the some sound FX are different from the original broadcast versions. Cannell had new prints made from the masters in the late 90's, those are what's currently used in syndication and for any DVD, blu ray release. There's also a new font used for the episode title, guest cast, and end credits for the 2nd seasons Plague.

While I'm on the subject of changes, the DVD and Blu ray release does not contain the 2 versions of the theme song used during season 2, or the alternate version used in season 3's The Newlywed Game. With the elimination of one of the season two versions of the opening credits, Don Cervantes doesn't get a onscreen credit for part of the 2nd season.