Any X-Box commercials yet? (1 Viewer)

I haven't seen any yet.If anyone has seen one could you please tell me the channel(network) and during what show you saw it?
I thought that with a $500,000,000 ad campaign I would be sick of the commercials already.
Thanks,
Shawn

That $500 million is being spent on more than just commercials. Ads in electronics stores, toy stores, kiosks, magazines, the appearance at E3, GameStock, and other advertising media have all been taking pieces from the half a billion dollars. Its not just TV commercials.

I do realize that the entire sum isn't for commercials,but rather for the entire ad campaign.
I still thought that with all of those $$$ we would have seen quite a few commercials already.Afterall,launch is only 2 months away.
Shawn

Some of that advertising budget was spent on these: 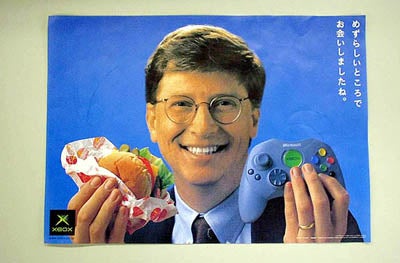 I thought it was odd that there were no XBOX commercials during the skateboarding competition that was sponsored by XBOX. Lots of MSN commericials tho'.

If any of you subscribe to PC Gamer, there's been a multi-page ad promoting the "official" X-box magazine the last few issues. I can't understand why MS would target a hardcore PC gaming publication -- PC gamers historically spurn all consoles. It's wasted money, if you ask me.
I'm also surprised that we haven't seen any commercials yet. With that ad budget, we should ALL be sick of those by now.

I can't understand why MS would target a hardcore PC gaming publication -- PC gamers historically spurn all consoles. It's wasted money, if you ask me.

MS aren't paying for it - Imagine are publishing the magazine, Imagine publish PCGamer. They're trying to push the mag to their existing audience - it's in most of the game related mags this month.
They paid Microsoft a large fortune for the rights to the mag and desperately need a large audience for it.
------------------
Nothing In Particular
Click to expand...

MS aren't paying for it - Imagine are publishing the magazine, Imagine publish PCGamer. They're trying to push the mag to their existing audience - it's in most of the game related mags this month.

Exactly. These mags are usually worth it for the demo disc alone. That's pretty much the only reason I bought their DC mag every month.
When I was in EB scoping out the XBox display, one of the hosts from ElectricPlayground came in and bought Mario Kart Advance and mentioned that they saw one of the XBox ads being filmed somewhere. I assume they should be starting up pretty soon. You don't want to start up too soon.
------------------
Click to expand...

Yes, in Advertising, timing is crucial to the success of an ad campaign. You want public awarness to be at a peak around the Christmas shopping season, and you do not want to create a backlash by over exposing a product.
So far, they are doing things right. I would expect to start seeing X-Box TV ads beginning in Late September/Early October ...about six weeks out in smaller numbers, and then peaking through mid November, and December.

So, what is Bill trying to tell us in the picture above?
McXbox?
Also, don't forget that Nintendo has also announced a $500 million marketing campaign for Gamecube. I'm quite sure Sony will be playing too.

So, what is Bill trying to tell us in the picture above?

So, what is Bill trying to tell us in the picture above?

Here's the translation:
http://www.novia.net/~whooter/bgates.jpg
Heh...
------------------
"The internet is a place where people from all over come together to
bitch about movies and share pornography."
Click to expand...

Actually, Nintendo is launchin a $45 million advertising budget for the US. Its doing what Nintendo has called a "nine week media blitz" from early November to late December. Their plan is to make everyone know what the GCN is and who made it.
Actually, Sony made a deal with McDonald's to make a demo of PaRappa 2 take place in a McDonald's. If Gates made a deal with Mickey D's also, this could be interesting.

They (MS) is banking on the Westernization of Japan with that advertisment. The good ol' american cheese burger being a decidedly American icon to the public at large.
They are trying to break through the cultural barrier.
That Ad is implying something to the effect of, "This is American (Cheeseburger)...This is good ...This is also American (X-Box) ...This is also good ...Give Us a Chance Japan!! Good things can come from America! Just remember the Cheeseburger!"

What Singer or Commercial?

Warner Archives Blu-ray of Al Jolson's The Jazz Singer (1925) - Anyone own this one?