Any word on Rat Patrol Season 2? 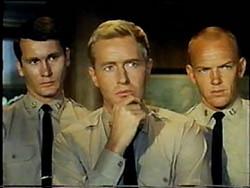 Season 1 of Rat Patrol came out in January, but Season 2 seems to be MIA -- any word on when it will be released?

I think this show maybe held up from the transition of MGM material from Sony to Fox. I hope it is coming soon. I really enjoyed the 1st season and have just finished it.

I knew about this show from seeing local station ads for the reruns when I was a kid back in the 1970s.

The Rat Patrol was probably the only 1960s WWII-era series that was in a 1/2 hour format rather than 1 hour. It wasn't up to the level of COMBAT! or 12 O' Clock High, but can hold its own.

This series also benefitted from music by Dominic Frontiere, re-using a lot of his first season Outer Limits incidentals that really enhance the enjoyment of any show. Now that I've been watching the first season uploaded to GUBA.com , I've really been enjoying Rat Patrol.

The Dominic Frontiere music actually predates Outer Limits - much of it was written for Stoney Burke, which ran on ABC in the 1962-63 season.

And I'm going to wait for the official DVDs -- I bought the first set and I'll be more than happy to pay for the second, if it's ever released.

I saw the entire Stoney Burke series when CBN Cable reran it in the early 1980s. Dominic Frontiere did indeed score and conduct the music for Jack Lord's first series too, but very little of his later Outer Limits music was a part of it. Most of the compositions were different, because Leslie Stevens wanted to give both series a completely different feel....which he succeeded in doing.

In fact, out of 32 episodes of Stoney Burke there was only one that I recall to feature a musical piece that Frontiere would reuse on The Outer Limits later that same year. It guest starred Buck Taylor and involved an untamed stallion.

I didn't say the music used in Outer Limits was what was used in Stoney Burke -- I never paid that much attention to Outer Limits when it ran originally, so I have no clue as to what the score sounded like.

What I said was, many of the cues used in Rat Patrol (whether they were used in Outer Limits or not) actually predated Outer Limits -- they were originally part of the background music from Stoney Burke, an older series. Frontiere reused a good many of his Stoney Burke cues for Rat Patrol, and used them again in Branded.
You must log in or register to reply here.
Share:
Facebook Twitter Reddit Pinterest Tumblr WhatsApp Email Link