Another delightful superhero enters the Marvel Universe with Peyton Reed’s Ant-Man, and like last year’s Guardians of the Galaxy, it’s a superhero who’s lighter and more whimsical than the ones who have heretofore dominated the Avengers universe. While some may find this superhero lite with a capital “l,” Ant-Man makes a welcome change from the world-on-the-verge-of-apocalypse stories (though if the film’s antagonist isn’t stopped, it could eventually lead to that) and for that reason alone is well worth investigating. It’s a fun popcorn flick which pleases both the eye and the ear. 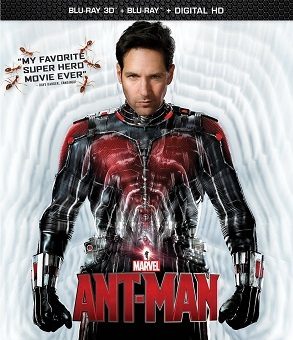 After three years in prison for the robbery of a conglomerate who he felt was cheating the citizenry, Scott Lang (Paul Rudd) finds life back in the real world taxing. Even with a master’s degree in engineering, he can’t even hold a fast food job, and though Scott had earlier turned him down, his buddy Luis (Michael Peña) offers him a small heist job which promises to pay big bucks, money desperately needed for Scott to begin paying child support so he can reenter his young daughter’s (Abby Ryder Fortson) life. The heist has all been a ruse, however, set up by tech genius Dr. Hank Pym (Michael Douglas) who has had his eye on Scott for years waiting for the moment when he can persuade him to become the latest incarnation of Ant-Man, a role Pym himself had taken in his younger days. Pym’s protégé Darren Cross (Corey Stoll) is very close to mastering the miniaturization formula that Pym had previously discovered, but Cross plans to use the technology to build an army of supersuited Yellow Jackets who can do his bidding for the right price, and Pym wants Scott to infiltrate Cross’ laboratory and destroy the technology.

A number of hands contributed to the screenplay (Edgar Wright, Joe Cornish, Adam McKay, Paul Rudd), often a bad sign of too many cooks potentially wrecking a unified vision of a story, but all works quite harmoniously here with the storylines serious but never too dour and with frequent sequences where jocularity and whimsy sustain the light tone and breeziness of the entire enterprise. That effervescence comes not just from leading man Paul Rudd but also from the scenes with his second-tier heist crew (Michael Peña as the poppa bear along with non-threatening turns by David Dastmalchian and Tip 'T.I.' Harris) and running gags involving their “La Cucaracha” van and their egomaniacal incompetence. The marvelous special effects work which shrinks Scott into the size of an ant certainly is worthy of the “Marvel” moniker, always providing an exhilarating series of thrill moments (his first experiences in the suit almost getting trampled in a dance club, his educational experiences with the ants underground which don’t always go as planned, and several fight sequences while he shrinks and enlarges at eye-snapping speed) while the training sequences which involve Paul Rudd’s wonderful dexterity as a physical comic actor while also displaying some serious combat skills and some obvious muscle training keep things grounded completely in the Marvel superhero universe. Director Peyton Reed handles the action stuff with skill and dexterity, but the tentative, somewhat abrupt romantic moments between Scott and Dr. Pym’s daughter Hope (Evangeline Lilly) aren’t written well or developed with the same kind of attention to detail that the rest of the movie sports. Perhaps that storyline might have been saved for a second outing since it doesn’t get the attention here that it deserves.

Whether he’s acting in drama or comedy, Paul Rudd always brings a pleasant earnestness to any project, and he’s wonderful casting for the wry, eager Scott Lang. Michael Douglas is a driven yet still appealing Dr. Pym trying to make his aged technology work in a modern era and attempting to carefully maneuver the potentially catastrophic waters of his relationship with his taciturn daughter Hope played with resilience and power by Evangeline Lilly. Obviously feeling cheated not getting to don the Ant-Man suit herself, Hope’s part in the plan might not be as significant as some others, but her time is obviously coming (if we are to believe the post-credit sequence). Corey Stoll is a great villain (we’re alerted to his callousness early-on when he kills not just an employee who questioned him but also an innocent baby lamb), and yet he doesn’t overact the villainy making for the best kind of antagonist. The hapless burglary crew comprised of Michael Peña, David Dastmalchian, and Tip 'T.I.' Harris may not be such great robbers, but they steal all of their scenes in the picture and make their every moment count. Anthony Mackie’s Avenger Falcon makes a surprise appearance in one of the movie’s best action sequences as Ant-Man struggles with a real-life superhero and comes out none the worse for wear. Bobby Cannavale as a policeman and Martin Donovan as one of Cross’ confederates play major roles in the action, while it’s great to see John Slattery as Howard Stark and Hayley Atwell as an older Peggy Carter in the pre-credit sequence which sets up the entire debate over the miniaturization technology which will occupy the film’s main plotline.

The film has been framed at its theatrical aspect ratio of 1.85:1 and is presented in 1080p resolution using the MVC (for 3D)/AVC (for 2D) codec. Sharpness is never in doubt even with the massive use of CGI necessary to bring things to life, and color is clean and solid even if there is some brownish tinge to the image. Black levels are robust, and contrast has been consistently maintained. The movie has been divided into 16 chapters.

The 3D conversion here has been done professionally, but the only scenes that really seem to gain great depth and uniqueness with the process are the ones while Scott is in his miniaturized state. Then, depth levels seem often off the charts, and object placements within the frame really gain massively in importance. There are no forward projections to speak of, and the late sequence of Scott drifting through the subatomic realm don’t seem to milk the most out of the 3D possibilities as strange shapes and geometric patterns pass by. So, this is a film which offers only a slightly better-than-average 3D experience.

The DTS-HD Master Audio 7.1 sound mix offers the same kind of completely immersive experience as other movies in the same genre. Though the lack of huge combat sequences means there are fewer opportunities for a full-on assault of the senses, when combat does take place (the face-off between hero and villain at the climax, for instance), the mix offers great opportunities for split effects and impressive use of the entire surround soundfield. Christophe Beck jazz-based background score has excellent spread through the fronts and rears, and the dialogue has been superbly recorded and mostly takes place in the center channel with an occasional bit of directionalized dialogue to add variety to the mix.

The 2D Blu-ray disc has the following material:

Audio Commentary: director Peyton Reed and star Paul Rudd have a friendly dialogue about the film watching it some three weeks after its premiere and knowing that the Marvel franchise had added another hero to its lineup. Reed does most of the talking, but Rudd counters with occasional comments on fellow actors and the production.

Let's Go to the Macroverse (8:06, HD): a brief look at the special effects work to portray the macrosets needed for the production and the necessity for four different units to shoot necessary footage for the picture. Commenting are director Peyton Reed, producer Kevin Feige, and actors Paul Rudd and Michael Douglas.

Deleted Scenes (8:39, HD): eight scenes may be watched in montage or separately.

Ant-Man is a refreshingly spare superhero movie with smaller stakes but more attention to character detail and marvelous special effects which draw us into this fascinating new world. Its lack of pretentious gravitas and a livelier spirit also make it a fun home theater experience. The Blu-ray offers great picture and sound quality even if the 3D is a rather a humdrum affair. Recommended!

Johnny Angell said:
I keep wondering why all the 3D releases never put the commentary on the 3D too? Surely the commentary can't take up that much disc space.
Click to expand...

I'd love it if they did that!
You must log in or register to reply here.