The sometimes debilitating sacrifices of families left back home during a war is contrasted with the shocking and turbulent hell of war itself in Clint Eastwood’s masterful American Sniper, one of the best films of 2014. Telling the true story of decorated sniper Chris Kyle with a kinetic energy and a dedication to doing his story proud, Eastwood presents a first-rate cast and a realistic production that is convincing both stateside and in the Middle East. While the domestic side of the story might have benefitted from a bit of beefing up, the war side is as brilliant and involving as anything the director has ever done (including some previously celebrated war films from other noteworthy conflicts). 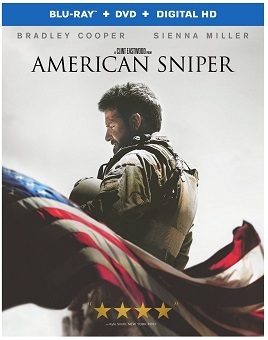 After a brief jaunt as a rodeo cowboy, Texan Chris Kyle (Bradley Cooper) decides he wants to serve his country and enlists in the Navy SEAL program emerging as a trained sniper just when the 9/11 attacks foster even greater commitment in the young man to protect and serve his country. Kyle’s cool nerves and deadly accuracy prove vital to Marines on the ground in Iraq with his 160 confirmed kills over four tours of duty earning him the nickname of “Legend” for Americans and making him the most wanted American enemy for the insurgents. Back home, young wife Taya (Sienna Miller) gives birth to two children and admires her husband’s dedication to service but deeply regrets her children growing up without a father and afraid of what his long absences are doing to their marriage.

Jason Hall based his screenplay not only on Chris Kyle’s autobiography but also on extensive talks with the man himself before his tragic death and his wife Taya. The result is a script that drips with realism both on and off the battlefield. In Clint Eastwood’s hands, Kyle’s four tours of duty, each one more lethal and viciously dangerous than the last, are numbingly dynamic and explosively volatile as Kyle’s risk taking becomes greater and the number of people out to get him increases in number. To simplify for the audience the various missions the troops are involved in, the war scenarios for Kyle focus on an enemy sniper who’s been nicknamed “The Butcher” (Mido Hamada), as accurate and relentless with a weapon as Kyle himself, and each of their encounters is hair-raising in the proximities to death for each of them. In their final showdown, the deck is stacked against Kyle since a kill shot having to travel over a great distance with great odds against its being successful will alert insurgents outside their position as to the whereabouts of the American troops. Eastwood pulls the noose tightly and then films the sequence in an agonizing slow motion at first that truly seems like an eternity before we see the result and then follows up with one of the most hackles-raising firefights imaginable as the skies and streets fill with smoke and dirt and one can barely make out in the gloom a friend from a foe. On the domestic front, however, there are fewer moments to remember. With quick vignettes early on to show us Kyle’s early promise with a gun and his brief career as a cowboy, we get less of the love story and conflict between the young marrieds than we’d like given Kyle’s Texas charm and Kaya’s beauty and pluck in dealing with him. These brief scenes between the two actors are well played and believable, but there would appear to be more there to tell.

Bradley Cooper is somewhat surprisingly but nevertheless triumphantly becoming America’s own version of Daniel Day-Lewis: an actor able to transform his voice and his body to fully embody persons both fictional and real. His Chris Kyle is tender and taut for such a bull of a man, and the actor unquestionably catches the twinkle in his spirit and the dedication to his duty that make him a figure worthy of a filmed biography. Sienna Miller hides every trace of her British accent as Taya, falling for someone she initially resists and then fighting as hard in her own way as he does in the field to hang on to him despite his absences and the great dangers he faces. The supporting cast is strong and sturdy even if their roles only amount to a few minutes of screen time apiece. Among the best of the performers are those who serve with Cooper’s Kyle: Kyle Gallner (his closest buddy during a couple of tours), Reynaldo Gallegos, Kevin Lacz, Jake McDorman, Eric Close, Luke Grimes, Sam Jaeger, Chance Kelly, and homeside Jonathan Groff whose life Kyle had saved, Robert Clotworthy as a Navy psychologist, and Jacob Schick as a wounded vet whom Kyle counsels.

The film’s 2.40:1 theatrical aspect ratio is faithfully rendered in this 1080p transfer using the AVC codec. Sharpness is never a problem with close-ups revealing plenty of detail in hair and facial features. The Iraq scenes have been slightly desaturated in color while the stateside scenes are more vibrant: both control the color values with dexterity and deliver believable skin tones when possible. Contrast has been admirably applied, and black levels are first-rate. The movie has been divided into 13 chapters.

The Dolby Atmos 7.1 sound mix (decoded to TrueHD 7.1 on my system) offers a visceral aural experience especially during the war sequences with rapid fire rounds zinging and pinging all through the soundstage and vehicles rumbling in amazingly real, deep pans that uses every bit of surround separation. Bass is aggressive when necessary, and the few interludes with music by Clint Eastwood and others get a nice spread but are never intrusive on the mood of the piece. Dialogue has been well recorded and has been placed in the center channel.

Dolby Atmos Update: I have a 7.2.4 Dolby Atmos configuration (4 ceiling speakers). While American Sniper had a great overall mix, it used the height channels sparingly, even during battles (helicopter, small arms fire etc.). Other than occasional cues, mostly music, there is almost no height channel activity for scenes that take place stateside.

One Soldier’s Story: The Journey of American Sniper (31:04, HD): a behind-the-scenes look from the film’s inception through early production problems and later coming under the sure hand of Clint Eastwood. Along with the producer-director, others commenting on the 44-day shoot (12 of the days in Morocco) and the intensive training for the film’s star to ready himself for the production are producers Andrew Lazar and Peter Morgan, screenwriter Jason Hall, and stars Bradley Cooper and Sienna Miller.

A stirring and engrossing screen biography of one of American most unsung heroes and one of last year's best movies, American Sniper is a very fine film brought to home video in a beautiful and well-executed Blu-ray release. Highly recommended!

I updated with thoughts on the Dolby Atmos mix. Great film overall.
You must log in or register to reply here.