It's another seventeen Emmy nominations for the third season of FX's American Horror Story as the miniseries scored another record-breaking ratings year for the franchise. Subtitled Coven, this year's frightful fun fest does indeed concentrate on witchcraft both dark and mysterious, but with the continual struggles for power within the coven and conflict from outside it from other competing forces of evil, there's more than a touch of camp this year making for a lighter overall air of mischief this season than in the previous two. For some, that will be a blessing, but for others, it is a slightly disappointing turn toward lighter material that sometimes didn't allow the series to live up to its name. 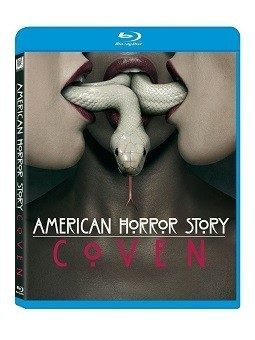 A New Orleans finishing school for witches serves as the backdrop of American Horror Story: Coven. It’s the headquarters of the head witch, here called The Supreme, Fiona Goode (Jessica Lange). Her unhappy daughter Cordelia (Sarah Paulson) unable to bear her own child by husband Hank (Josh Hamilton) is actually running the school whose enrollment has sunk to its lowest ebb, now home to only four students: spoiled Hollywood star Madison Montgomery (Emma Roberts) who has the power of telekinesis, sullen Queenie (Gabourey Sidibe) who’s a living voodoo doll, sweet-natured Nan (Jaime Brewer) who’s a clairvoyant, and new arrival Zoe Benson (Taissa Farmiga) whose sexual power is so strong that it kills boys she has intercourse with. Over the course of the thirteen episodes, a new Supreme is expected to reveal herself as Fiona (who’s been diagnosed with cancer) can’t heal herself and feels her immense powers ebbing away into one of the house’s charges. But she has other problems to deal with. She’s also embroiled in a rivalry to the death with local head voodoo priestess Marie Laveau (Angela Bassett), and she’s dug up one of the most infamously racist characters from pre-Civil War New Orleans, Madame Delphine LaLaurie (Kathy Bates), an immortal who had been buried alive more than a century ago by Laveau (also an immortal) to get her out of the way.As has been the case with the previous two editions of this series, events jump back and forth in time constantly as we get backstories on all of the major characters from Madame LaLaurie who lived in the 1830s to Fiona who came to power in 1971. There are also scenes from the 1960s and some set in 1919 when one of the showier characters from the second half of the season, the Axeman (Danny Huston), was in New Orleans doing his serial killer dirty work chopping young women who didn’t cotton to his jazz music (his subsequent resurrection into the modern day makes for some rocky, wayward episodes that aren’t always satisfying). With no love lost between many of the girls for their elders, and the constant struggle for supremacy between Fiona and Marie (who do truly dastardly things to one another during the season), there’s quite a lot of bitchery going on from episode to episode with very few likable characters, and binge watching the shows in an afternoon can make some of the mean talk very repetitive and tiresome. While there is more humor in these shows than was in the previous two seasons of the show, that isn’t to say there aren’t many graphic displays of gruesome violence and horrific murders almost constantly. However, with the presence of the witchy character of Steve Nicks fan Misty Day (Lily Rabe) who has the power of reanimation, many of the characters we see shockingly butchered before our eyes are brought back to life during the course of the series making death at least in this season more of a sometime thing.Both Jessica Lange and Kathy Bates won Emmy Awards for their outstanding work during the season (Bates really embraces her vile character with almost ghoulish delight), and Sarah Paulson, Frances Conroy (as the head of the Witches’ Council), and Angela Bassett all received well deserved nominations for their charismatic work. Along with the actors previously named, important supporting performances are also delivered by Evan Peters as a hybrid Frankenstein’s monster type, Denis O'Hare as a creepy, doll-obsessed butler, Lance Reddick as a voodoo devil who often seems like the real thing, and Michael Cristofer as a certified witch hunter who has been plying his trade for many decades.Here are the thirteen episodes contained on three Blu-ray discs in the season three package:1 – Bitchcraft2 – Boy Parts3 – The Replacements4 – Fearful Pranks Ensue5 – Burn, Witch, Burn6 – The Axeman Cometh7 – The Dead8 – The Sacred Taking9 – Dead10 – The Magical Delights of Stevie Nicks11 – Protect the Coven12 – Go to Hell13 – The Seven Wonders

The episodes are presented in their widescreen television aspect ratio of 1.78:1 and are in 1080p resolution using the AVC codec. Visual quality is softer than one might expect, possibly due to glamour photography for the predominantly female cast or possibly for the sake of effect. Color is solidly realized, and the copious amounts of red in blood-letting scenes seem realistic and never bloom. Flesh tones are likewise true to life. Black levels are good but not phenomenally deep. Each episode has been divided into 12 chapters.

The DTS-HD Master Audio 5.1 sound mix works its effective spell throughout the run of the series though one may find that the rear channels aren’t used quite as imaginatively as the front soundstage in many of the shows. Music plays a crucial part in several “boo” moments and is the most enveloping aspect of the sound design. Dialogue has been expertly recorded and is always clearly heard in the center channel. The LFE channel is used quite well to keep a low, rumbling bass going through various episodes to maximize tension.

With four Emmys won for this season’s installment of American Horror Story, it’s off on another ever-darker entry next season with Freak Show. This box set will surely please the show’s many fans even if the season overall wasn’t quite up to the frights and surprises of the previous two years.

love this show!!
You must log in or register to reply here.