Known for his piercing and trenchant dialogue, playwright David Mamet has produced a number of scintillating works for the stage, and several of them have received big screen adaptations. The 1996 movie version of his breakthrough play American Buffalo has lost something on the way to the big screen: part of it due to casting, part of it due to direction, and part of it due to the changing times (the play was first presented in the early 1970s with this movie arriving two decades later) which have made its vicious, coruscating dialogue and whiplash character interplay less novel and fresh. It’s still a film worth experiencing, but check out Glengarry Glen Ross to get the authentic look and sound of David Mamet at his corrosive best. 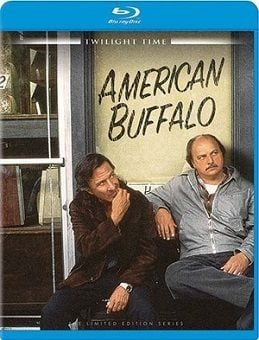 Two small-time losers – junk shop proprietor Don (Dennis Franz) and aimless con artist Teach (Dustin Hoffman) – have planned a heist of a coin collection from a man who had previously bought a buffalo-sided nickel from Don for more money than they thought it was worth. Though Don had originally planned the robbery with his young protégé Bobby (Sean Nelson), jealous, grasping Teach convinces Don to ditch the kid and take him on instead. But as the evening wears on and another acquaintance whom Don had contracted to help them doesn’t show up, the plan falls apart as Don and Teach begin to confront their own animosity toward one another and their pathetic dead-end existences.

Pulitzer Prize-winning playwright David Mamet has adapted his stage work for the screen with its deft mixture of poker-faced comedy and tragic realism, and together with director Michael Corrente have done their dead level best to open the play up a bit by bringing some of the action of the story out of the junk shop setting of the original play and spilling it over into the street, the back alley, and a parked car in the surrounding neighborhood. Thus the claustrophobia from the original production is minimized somewhat with this opening out of the setting, but this is one time when the close quarters and the accompanying closing in on the realization for the characters that their lives are never going to change (except maybe for the worse) don’t need to be minimized. These are losers who are doomed to stay losers: talking a good game, strutting around with their outward bravado about their own authority and cleverness while we see clearly their idiocy and ineptitude. Director Corrente does keep his camera poking around the fascinating contents of this junk shop from a variety of angles and levels to usually great effect (though a late-story attack on one character is shot and cut abruptly as if one were still operating during the days of the Production Code where sound effects and discreet camera placement often had to suffice when acts of violence were committed). Even with only an 87-minute running time, the movie plays a trifle long with occasional bits of stagey dialogue (the characters continually naming the people to whom they’re addressing), and one misses the presence of any other people on the streets and with only an occasional car driving by giving an almost unearthly tone to this rundown Chicago business district (thought it was filmed in Province, Rhode Island).

While Dustin Hoffman gets top billing (in a role made famous on stage by, among others, Robert Duvall and especially Al Pacino in a number of different productions), his showy character (all empty talk full of ridiculous platitudes and self-pity) is actually less interesting than Dennis Franz’s Don. Hoffman’s Teach (ironic name since such a boob has nothing to teach anyone) is a walking billboard of increasing paranoia and verbal poison manipulating Don into changing his plans and mistrusting his young friend. For his part Franz has the richer role seguing through determination and disgust and mistrust and finally empathy in an engaging portrait of a loser with still small vestiges of goodness inside. The two award-winning actors play off one another brilliantly with neither of them overdoing the mannerisms to stand out from the other character but trusting the words to do their job. In such elevated company, Sean Nelson holds his own as Bobby, his youth and inexperience around two men on the verge of cracking completely believable in the second half of the film when things get dark very quickly. By Mamet's turning Bobby into a younger teen rather than an already experienced hood/loser as he appears in usual stage productions, different character dynamics are at play which soften the story a bit and make it less depressing.

Apart from some occasional specks of dirt (more noticeable in the film’s second half), the movie looks quite wonderful. The 1:85:1 theatrical aspect ratio is faithfully reproduced in 1080p using the AVC codec with sharpness outstanding and color values splendid, the soft inside lighting casting a wonderful tone over the frame that emphasizes the realistic skin tones present. Contrast has also been consistently applied making for a very appealing picture. The movie has been divided into 24 chapters.

The DTS-HD Master Audio 2.0 stereo sound mix is about as non-showy as a mix can be with the dialogue masterfully recorded and presented in the center channel, and the very sparse score by Thomas Newman and occasional sound effects of police sirens or passing cars and noises within the junk shop itself clear and precise.

Audio Commentary: film historians Nick Redman and Julie Kirgo contribute an interesting discussion of the play version with its various star actors down through the years (each has seen it performed on stage), an analysis of the film version, and discussion of David Mamet’s writing style and opinions about writers and filmmaking. As always, it’s a must-listen.

American Buffalo is a fine screen representation of a highly lauded play, and Twilight Time has brought to viewers a beautiful video and audio production of this little-seen work. There are only 3,000 copies of this Blu-ray available. Those interested should go to www.screenarchives.com to see if product is still in stock. Information about the movie can also be found via Facebook at www.facebook.com/twilighttimemovies.

Saw Pacino live in "American Buffalo" in the early eighties; electrical immediacy and spraying saliva with nearly every word.
I'm a huge Hoffman fan, but was disappointed that he took the part. Regretfully, this film version never worked for me.
Are there any known stories as to why Pacino didn't get to do the film; and why Hoffman even bothered?
But, yes, "Glengarry Glenn Ross" is the better of both film treatments. And it crackles !!!
But, then again, Pacino is in it and clearly he possesses a finer mastery of Mamet's rhythms, cadences and musicality.

I really enjoyed American Buffalo, but I think it helped that I'd never seen Pacino's famous stage performance as Teach so I had nothing to compare it to. I think Dustin Hoffmann was very good in the role, full of a desperate, manic energy. Dennis Franz, though, is the real attraction - his performance is excellent and complex, at times tenderhearted and naive and at times sullen and selfish. Although the movie isn't quite as good as Glengarry, it's well worth picking up.
You must log in or register to reply here.