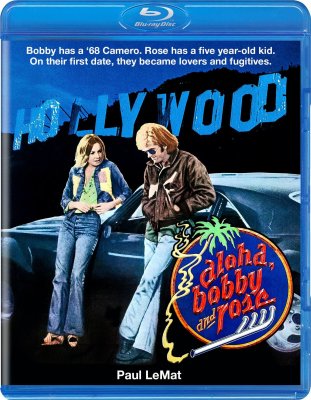 In this pre Rocky era Columbia released the hopeless romance film Aloha Bobby & Rose (1975) which saw some moderate box office success, probably inspired by the killer musical soundtrack of the hit songs of the day.


This tale of two lovers did inspire teen romantics ( like myself ) along as I'd discover just how powerful life's overpowering vital emotion (L.O.V.E.) could be.

Come April 17th of this year (2018), Scorpion is bringing ABR to HD Blu. I have no information yet about the PQ of the transfer but a kids puppet show of this movie would be far superior to the old DVD release a few years back.
I got the release notification in my email from Blu-Ray.com

Release date is April 17th, oh I already mentioned that.

Not my cup of tea, but I know you have wanted this for a long time. I’m glad you get to mark it off your list.

Now we still need Thank God It’s Friday and Skatetown USA and we can both mark two off our list.

Thanks for the kudos.

I pretty much know what's holding up Skatetown USA (1979), music rights issues with all the hit songs from 1978-1979 on the soundtrack.

I'd be inclined to say the same for Thank God It's Friday (1978) but we did get a 2006 DVD release with music intact. So that may not be the main reason and I can't think of what the main reason for the holdup would be.

Both being Sony/Columbia titles would make these films Twilight Time candidates but TT has no interest in this particular genre of film. I'd gladly pay $29.95 for either title and would spread the word owner cyberspace if they were remastered & released on Blu and UHD Blu.

TGIF would be a good Shout or Indicator candidate.