This makes Menken the 16th person in history to achieve EGOT status.

For those unfamiliar, here is the winning song, "Waiting in the Wings."

Alan Menken will do a virtual fundraiser discussion and then a free performance online with the Walt Disney Family Museum in August.

Tickets for the discussion portion start at $200, which is too rich for my blood, but I registered for the free performance portion.

An Evening with Alan Menken will celebrate the Beauty and the Beast composer's recent EGOT achievement.

Don Hahn is live with Broadway.com talking about the new documentary Howard, which premieres on Disney+ on Friday. As the title suggests, it is about the life and career of Howard Ashman.

I'm really looking forward to the doc on Howard Ashman.


Jake Lipson said:
As the title suggests, it is about the life and career of Howard Ashman.
Click to expand...

It's funny you say that because I think just the opposite. I don't think the title suggests that at all. I think it's an awful title because very few people would know enough to associate "Howard" with Howard Ashman. It's not like he's Cher or Elton or Englebert, etc. This new propensity towards supershort titles (in the era of social media) only goes so far. They should have done better with the title.
Reactions: MatthewA

Mike Frezon said:
It's funny you say that because I think just the opposite. I don't think the title suggests that at all. I think it's an awful title because very few people would know enough to associate "Howard" with Howard Ashman.
Click to expand...

That's fair. But I think, for Disney+, it works, because he is the most famous Howard who made a contribution to Disney. If it were being released somewhere other than Disney+, like a theatrical release, then, yes. But for where it ended up, I think the connection is fairly clear.

Anyway, the interview I posted in the above post is happening live now, and it's great.

Has anyone else watched Howard on Disney+ yet?

Broadway.com is about to go live with Tony winner Santino Fontana, known to Disney fans as the voice of Hans in Frozen:

Tonight's episode of Stars in the House had a virtual reunion of cast members from the stage production of Newsies.


If any of you haven't seen the stage version of Newsies, its professionally recorded stage taping is streaming on Disney+.

Some of Ariel’s most famous and instantly recognizable lines in The Little Mermaid like “Flounder, don’t be such a guppy,” “But Daddy, I love him!” and “Maybe he’s right, maybe there is something the matter with me,” were all recited that exact way because the film’s lyricist told Jodi Benson to...

Tonight's episode of Stars in the House will feature Susan Egan, Terrance Mann, Andréa Burns, Kerry Butler and Debbie Gibson to discuss Beauty and the Beast. Embed below.

The YouTube series Quarantine and Cocktails is currently live, hosting a (virtual) reunion of cast members from the Broadway production of Frozen:

Lea Salonga appeared on The Producer's Perspective stream with Ken Davenport. He produced the Broadway revival of Once On This Island in which she starred as Erzulie, the goddess of love. Disney fans of course know her for her contributions to Aladdin and Mulan.

In memory of Helen Reddy, she once told Radio Disney this was her favorite song from Pete's Dragon:

Jonathan Freeman (Jafar) returned to the New Amsterdam Theatre in a mask for some new photos and an interview with Broadway.com about what he has been doing during Broadway's shutdown. He of course voiced Jafar in the movie and has been playing the role on stage all the way through the show's development and Broadway run. 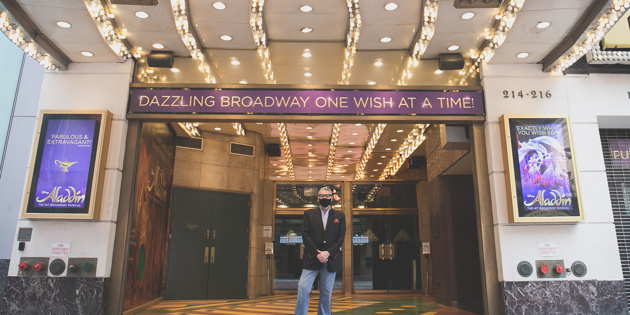 Living near the theater district during the Broadway shutdown, photographer and performer Matthew Stocke has been haunted walking past the empty palaces sitting in …

Back in 2019 B.C. (Before COVID), Disney and Cameron Mackintosh produced a revival of the Mary Poppins stage musical in London. Like everything else, it was forced to shut down in March due to the current situation.

But they recorded a live cast album first. It features Zizi Strallen as Mary Poppins and Charlie Stemp as Bert. Maybe best known over here in the U.S. is Petula Clark as the Bird Woman. Release date is November 6.

The West End productions were recorded prior to the shutdown.


This will be the third cast album of the show following the original London cast (2004) and the original Australian cast (2011.) I have both of those, but love the score and am excited to get a new one.
Last edited: Oct 20, 2020

I just stumbled on an interesting new release. "Disney Goes Classical" will have mostly instrumental recordings performed by the Royal Philharmonic Orchestra. This has been a digital exclusive for a bit (iTunes says it was first available October 2), but the discs are coming this week. 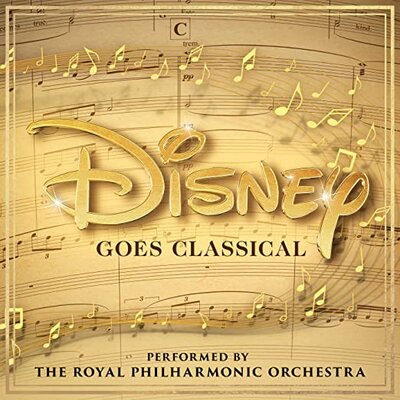 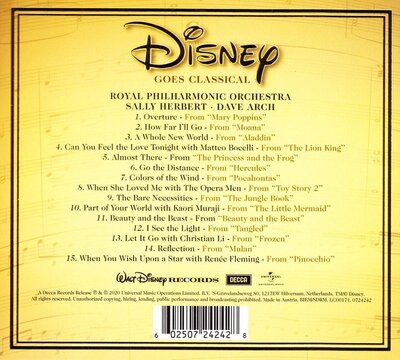 I'm not sure why they chose to have a few songs sung while all of the other tracks are instrumental. That makes them stick out a little like a sore thumb, even though the performances are good, because they break up the feel of the instrumental album. Also, Can You Feel the Love Tonight? uses the lyrics for the pop single version performed originally by Elton John rather than the lyrics from the version inside the film. When She Loved Me Is performed by a bunch of men, which doesn't sound bad but is strange because of course it is traditionally a female song in the movie.

But it all good material. Amazon's price right now is $16.98, and I'd really like that to go down a little bit. But I'll probably get it sooner or later anyway.

I would post an Amazon link in here but I'm not sure if my doing so generates a referral for HTF or not, so if you want it, just go to Amazon via an HTF link and search Disney Goes Classical and it will come right up. The CDs are this Friday. If you're into that, there will be a vinyl record version releasing December 4.

Also, back on October 9, I posted about a new London cast recording for the stage production of Mary Poppins. At that time, I thought I was going to have to import it from the UK. However, it has fortunately shown up on the American Amazon too, so I switched my order over and won't need to import it.

To find that one on the American site, click through a HTF link and search for "Mary Poppins (The Definitive Supercalafragalistic 2020 Cast Recording Live at the Prince Edward Theatre." 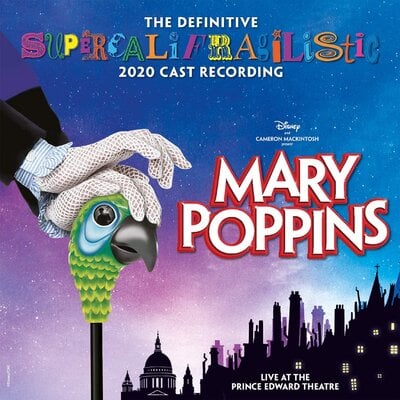 Two songs from this one have been released early digitally. "A Spoonful of Sugar" led by Zizi Strallen as Mary Poppins and "Step in Time" led by Charlie Stemp as Bert. The new cast sounds great and I can't wait to hear the rest of it.
Last edited: Oct 20, 2020

I had seen both of those titles were coming...but neither one interests me all that much (except maybe the Mary Poppins cast CD).

But I scored my own Disney CD today...direct from Japan. Amazingly, ordered Sunday night and delivered Tuesday afternoon! Things arrive from amazon.jp faster than Amazon.com often.

Everyone once in a while, I just decide I'm in the mood for some new Disney music and this one spoke very loudly to me. I love Disney music and I love solo piano. I found the first track improbably (only because I'm not sure how "peaceful" the Mickey Mouse Club March" will be! I'll be sure to post up a review after I've given it my attention.
Reactions: Jake Lipson

Mike Frezon said:
I'll be sure to post up a review after I've given it my attention.
Click to expand...

It's as easy as this: If you like Disney songs...and you like beautifully-arranged solo piano performances...this is a perfect CD for you.

It is definitely a mellow collection of songs/performances. I don't know who the artist is (the liner notes are in Japanese). But it is a confident and nuanced performance. Just beautiful. This CD was a smart purchase by me. It fits right in my wheelhouse.

Even the opening track of the Mickey Mouse Club March was beautifully done and easy-going. I'll be listening to this album a lot in coming days.