All That Heaven Allows Blu-ray Review

The mother of all Technicolored melodramas must be All That Heaven Allows, Douglas Sirk and Ross Hunter’s 1955 follow-up to the tremendously successful Magnificent Obsession from the previous year. Even more so than in the earlier film, All That Heaven Allows wallows in its strikingly downbeat middle class morays and conundrums and allows its two reunited stars from the previous year – Jane Wyman and Rock Hudson – to indulge once again in a pairing that could be exploited for the maximum amounts of outrage and tears by on-screen players and off-screen viewers. Today, films like this with their overripe emotions and thudding predictability might play as camp fests, but taken in context, the film pleased a lot of people in its day and represents the kind of movie an audience could watch in earnest and root for the characters to find a way out of their problems. 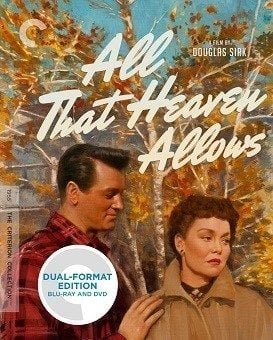 Widow Cary Scott (Jane Wyman) has no interest in the men of her social country club set for anything but as escorts to club dances, but her earnest gardener Ron Kirby (Rock Hudson) interests her with his love of the simple life, being close to nature and completely unconcerned with social status or country club memberships. Though he’s fifteen years her junior, Cary begins seeing Ron often and once things turn serious between them, Cary knows neither her grown children Kay (Gloria Talbott) and Ned (William Reynolds) nor the gossipy, judgmental country club vipers will find her relationship with a younger man anything but ludicrous, but even she’s not prepared for the viciousness of their disdain or her children’s admonishments about her choice. Thinking they’ll be there for her, Cary calls off the marriage, but she has a few surprises in store for her once she cuts all ties to Ron in order to please everyone else in her life.The most noticeable aspect in the screenplay by Peg Fenwick is the utterly ferocious nastiness and small-mindedness of the middle class portrayed in this “typical American town.” Apart from Cary’s best friend Sara (Agnes Moorehead), none of her “friends” bother to even be civil to the man she’s in love with, a brutally satirical swipe at class mores which leaves the viewer with an extremely sour taste in his mouth (cruel gossips spring up in this set like weeds reveling in their sarcasm and negativity). Cary, of course, is also painted mousier than necessary not standing up to the most insulting gossips (Jacqueline de Wit as worst-of-the-lot Mona and drunken, married Howard Hoffer who puts the moves on Cary and then has the nerve to criticize her behavior later) or demanding that her children sit down and talk things out with her seeing things from her perspective (they’re not adolescents, but she allows them to whine their way into her feelings of guilt as if her feelings must be sublimated). In 1950s America, perhaps the desire to be thought of as part of a group rather than apart from the crowd was pervasive, but the script could have done with more scenes showing the evolution of the love affair and the subsequent adult discussions of the possibilities of their being outcasts which would have taken the edge off some of the soap opera-like abrupt decisions and lack of compromise shown in the finished product.There are no strong sexual or emotional sparks in the Jane Wyman-Rock Hudson relationship pictured here, so this great love they supposedly share has to be taken on word alone. Both stars act with feeling and purpose: she shows more colors of personality, he is more stolid and insistent on his way. Agnes Moorehead has likely the film’s most sympathetic role as Cary’s friend who tries as hard as she can to see arguments on all sides. Also very appealing is Virginia Grey playing a married friend of Hudson’s Ron, an open and gregarious woman who welcomes Cary into her friend’s life with open arms. Gloria Talbot and William Reynolds are more than adequate as the children thrown for a loop at their mother’s decision.

The film is presented here framed at 1.75:1 and is offered in 1080p using the AVC codec. Oversaturation of color is by far the most striking aspect of this transfer. Always known for its rich, deeply saturated hues (used as the basis for the deeply warm and rich color timing of Todd Haynes’ Far From Heaven), here the colors occasionally go a bit too hot though anyone looking for colors that pop should come here first (a red plaid shirt that Rock Hudson wears practically leaps off the screen, and you can see Agnes Moorehead’s orangey red hair at even the greatest distances). Sharpness apart from some softer glamour close-ups is quite outstanding, but black levels aren’t as rich and dark as they once might have been. The film has been divided into 23 chapters.

The PCM 1.0 (1.1 Mbps) sound mix is very much a product of its time. The dialogue has been well recorded (some ADR work at a slightly lower pitch is noticeable), and the combination of it with Frank Skinner’s striking music score and the usual slightly subdued sound effects never compromises being able to understand every word (even with Rock Hudson’s approach to almost whispering his lines and never raising his voice). No age-related artifacts impair the soundtrack’s effectiveness.

Audio Commentary: film historians John Mercer and Tamar Jeffers-McDonald offer an adequate commentary on the film describing on-screen events more often than needed and not offering more historical perspective on the careers of the cast and crew.Rock Hudson’s Home Movies (1:03:49, HD): Mark Rappaport’s look at Rock Hudson’s real-life homosexuality as reflected in the heterosexual roles he played during his years as a screen star.Behind the Mirror: A Profile of Douglas Sirk (57:15, HD): a 1979 interview with the director about his life and career after he had stopped directing Hollywood films.Contract Kid: William Reynolds on Douglas Sirk (23:04, HD): the film’s young juvenile lead remembers the three films he made with Douglas Sirk and also comments briefly on great stars like Jane Wyman and Barbara Stanwyck and contemporary Rock Hudson in this 2007 interview.Cinema Cinemas (15:53, HD): a 1982 interview with Douglas Sirk for French television which also shows some film clips from his work.Theatrical Trailer (2:30, HD)Twenty-One Page Booklet: offers the chapter listing, cast and crew lists, some beautiful color stills from the film, filmmaker Laura Mulvey’s take on the movie, and director Rainer Werner Fassbinder’s 1971 essay on the film.DVDs: the contents of the single Blu-ray are contained on two enclosed DVDs in this dual format release.Timeline: can be pulled up from the menu or by pushing the red button on the remote. It shows you your progress on the disc, the title of the chapter you’re now in, and index markers for the commentary that goes along with the film, all of which can be switched on the fly. Additionally, two other buttons on the remote can place or remove bookmarks if you decide to stop viewing before reaching the end of the film or want to mark specific places for later reference.

One of the most famous of the Douglas Sirk melodramas of the 1950s, All That Heaven Allows comes to high definition in a beautiful package that offers a striking (if perhaps a tad too overtly colorful) video encode and some nice upgrades to the original bonus features offered previously. Recommended!

Great review, Matt. I saw this film on TCM the other week (Rock Hudson is their Star of the Month) and enjoyed it. I think I'll pick up the Blu-ray at some point.

This Blu-ray just became a double-feature and much higher in my queue to purchase!

Well, I guess I'm a sucker for melodrama, because I really enjoyed All That Heaven Allows, which is now one of my favorites from 1955. Got it recently on sale from Criterion.

Beautiful pq on this blu-ray. Sirk is quite a one for colors. It weaves a web of cinematic fantasy even at it critiques the narrow-mindedness of the upper middle class of the time.

It's impressive how many good films from 1955 that now have beautiful blu-ray releases.

Love Me or Leave Me looks simply spectacular on its Blu-ray release.

Matt Hough said:
Love Me or Leave Me looks simply spectacular on its Blu-ray release.
Click to expand...

As a movie, how would you rate Love Me or Leave Me in terms of your favorites from 1955?

I know I'm missing something, and there are several notable movies from 1955 I still haven't seen....
Click to expand...

Man, I'd almost forgotten just how good of a year 1955 was for cinema. The ones I've bolded are all favorites of mine. I'd also add the following from that wonderful year:

Allansfirebird said:
Man, I'd almost forgotten just how good of a year 1955 was for cinema. The ones I've bolded are all favorites of mine. I'd also add the following from that wonderful year:

Blackboard Jungle
The Bridges at Toko-Ri
The Dam Busters
Guys and Dolls
The Ladykiller's
Land of the Pharaohs
Mister Roberts
The Night of the Hunter
The Seven Year Itch
Summertime
Click to expand...

I'm also a fan of The Bridges at Toko-Ri, but according to imdb that one came out in December of 1954. I think it was one of the last major Hollywood films released in the original academy ratio.

benbess said:
As a movie, how would you rate Love Me or Leave Me in terms of your favorites from 1955?
Click to expand...

Certainly among the top fifteen of the year for me.
You must log in or register to reply here.