The plain truth is that a little bad luck at just the right moment can be very funny (as long as it happens to the other guy): slipping on a banana peel, tumbling into a pool accidentally, getting conked on the head by a hard object, but when you string together over an hour of such mishaps, the fun turns sour and the surprise quotient evaporates leaving just a pile of miserable victims. Neil Simon found this out in his hapless comedy The Out-of-Towners, and it’s just as true with Miguel Arteta’s Alexander and the Terrible, Horrible, No Good, Very Bad Day. Fortunately for the latter film, it’s barely eighty minutes long and the feeling of discomfort which envelopes the movie like a blanket is over relatively quickly. Pulling off a farce of misfortune necessitates walking a very fine line, and that just doesn’t happen here. 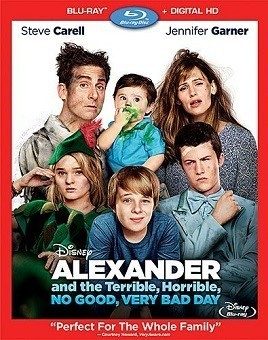 About to turn twelve, Alexander Cooper (Ed Oxenbould) is tired of the rest of his family leading fairly charmed lives while his daily fare is always on the crappy side, so he makes a pre-birthday wish that his family could understand what living a bad day is really like. As if by magic, each one of his family members experiences the next morning the beginnings of the nasty, abysmal day to come, all of which are coming on a really important day for every one of them. Father Ben (Steve Carell), out of work for seven months, has his first job interview in a while with a software development company. Mom Kelly (Jennifer Garner) is about to launch a new children’s book with Dick Van Dyke as the guest reader at the book’s premiere party. Brother Tony (Dylan Minnette) is taking his driver’s test that afternoon before escorting his girl friend (Bella Thorne) to the prom. And sister Emily (Kerris Dorsey) has the lead in the school production of Peter Pan opening that afternoon. Seeing their worlds turn to ashes around them doesn’t perk up Alexander; in fact, it makes him have his worst day ever seeing the people he loves having to suffer the indignities in their series of misfortunes and letdowns.

Based on the 1972 classic children’s book by Judith Viorst but expanded to outlandish proportions and containing a last reel turnaround that sets things right (and adds a moral lesson of its own about anything being able to be endured if one has a loving family around), the script by Rob Lieber manages to fit in all the usual 21st century family comedy tropes (including pee and vomit jokes) amid its wacky and unending series of catastrophic mishaps. While there are individual scenes that earn their laughs more honestly (Tony’s driver’s test with haughty examiner Jennifer Coolidge on board for a wonderful cameo), many of the slapstick set pieces are poorly conceived and then staged awkwardly by director Miguel Arteta including Emily’s debut as Peter Pan (high on cough syrup to treat a cold and sore throat; where was her director or any of her fellow actors backstage to allow her to do what she does?) and Ben’s meeting with his potential new employers in a Japanese restaurant where he manages to set his arms on fire (while the other patrons sit there totally frozen in place with no reactions, not even after he manages to put himself out). The climactic birthday party for Alexander that starts out so wrong (watch out for that crocodile!) does end the movie on a cheerier and more ingratiating note, but the movie never stops to think about all of the loss and destruction wreaked on the school and quite a few individuals in its fierce determination to pull out all the comedy stops. It’s a good thing mom doesn’t lose her job and dad picks up one during the course of the movie since the damages racked up during their terrible, horrible, no good, very bad day appear to be considerable.

Though it would have been easy to approach this kind of all out farce with a goggle-eyed, over-the-top performance, Steve Carell handles the ups and down of his horrible day much more calmly than one might have expected and emerges as one of the film’s prime assets. Jennifer Garner as the mother has less success but also reins emotions in as well as she can. Dylan Minnette does quite well as Tony as he maneuvers through his madcap day of disappointments, but Kerris Dorsey’s drunk act as Emily doesn’t quite fly. Oddly enough, Ed Oxenbould as the title character after some key moments early in the film as he goes through a typical day of doom rather stands outside most of the movie observing his family’s calamities. As Kelly’s exacting boss, Megan Mullally plays her caricatured role with as much skill as she can muster but with feeble comic results.

The film’s 2.39:1 theatrical aspect ratio is faithfully delivered in a 1080p transfer using the AVC codec. Sharpness is outstanding throughout with lots of detail (Tony’s big zit on the day of the prom looks amazingly real), and color is solid and accurate with believable flesh tones. Contrast has been expertly and consistently maintained. The movie has been divided into 12 chapters.

The DTS-HD Master Audio 5.1 sound mix utilizes Christophe Beck’s music and some pop tunes on the soundtrack as the film’s most expressive use of the surround channels. Sound effects seem more frontcentric than enveloping. Dialogue has been well recorded and has been placed in the center channel.

Alexander…In Real Life (5:18, HD): we meet original author Judith Viorst and her real-life (grown) son Alexander on whom the story character was based.

Walkabout: A Video Diary (6:15, HD): young Australian actor Ed Oxenbould takes video camera in hand and walks us behind the scenes into the trailers and onto the sets of the movie.

“Hurricane” Music Video (3:59, HD): The Vamps perform the song amid film clips from the movie.

An innocuous if somewhat tiring mishap family comedy, Alexander and the Terrible, Horrible, No Good, Very Bad Day is certainly safe family fare, and its relatively brief running time means even those who grow weary of its slapstick won’t have long to endure it. For those in the mood for its routine destruction, it may prove momentarily enjoyable.

I loved the book, so did my kids, many years ago -- I still have it, and pull it out occasionally to look at -- and the description of the film kind of confirms my worst fears, that it inflates the premise to an unsustainable size. In the book, Alexander is constantly getting into scrapes, partly because of his attitude, but they are not car crash type scrapes but little things, like messing up the photocopier in dad's workplace. So no, it doesn't sound like the book, which is light, and forgiving. It sounds like another rent-a-title effort from Hollywood where the story has been subjected to a committee re-think and has effectively disappeared, meaning the film will appeal neither to fans nor to neophytes. As a 25 minute animated short, it might have worked. Too bad.

Hmmm. Or, maybe as a live-action short...even retaining some of the star-power.


What an interesting idea that might've been.


Not sure how it might've been marketed to today's theater-going audiences, but an interesting idea nevertheless.

Disney is a terrible, horrible, no good, very bad company!
You must log in or register to reply here.