Admission submits its application to Blu-ray, with the result being a disappointing film with some good parts that don’t add up. Ostensibly, this is a romantic comedy starring Tina Fey and Paul Rudd, concerning the swirl of craziness that happens around admission time each year at Princeton University. But the movie lacks a sense of direction to hold it together, something it might have found had the director and screenwriter not radically gutted the book from which the movie is adapted. There are some really funny moments along the way, a few bits of comic invention here and there, but the movie simply falls apart in front of the viewer. The Blu-ray presentation has the usually solid picture and sound, and a very short featurette is included in the package. 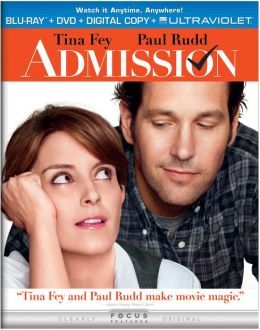 Admission is presented in a 1080p AVC 2.40:1 transfer at an average 33 mbps which shows off a fair amount of detail from the campus locations and wardrobe. This is a mostly warm-toned movie and the transfer reflects that emphasis. On a technical level, this Blu-ray delivers a fine picture.

Admission is presented in an English DTS-HD Master Audio 5.1 mix (averaging 3.5 mbps) that tends toward the quieter end of the spectrum. Most of the mix is in the front channels, with some music coming through the surrounds. There are occasional moments where the subwoofer sparks to life, but overall, it’s not that kind of movie. The Blu-ray also includes a standard 5.1 DTS mix in Spanish.

The Blu-ray presentation of Admission comes with a single bonus feature, a twelve minute promotional featurette. The packaging also includes the DVD release, which includes the featurette and a few selected previews. A digital copy is available online via pocket BLU or via a code included in the packaging. I should note that I was unable to make any use of BD-Live with this title.Early Admission with Tina Fey and Paul Rudd (1080p, 12:04) (AVAILABLE BOTH ON BLU-RAY AND DVD) – This is the standard making-of featurette, with plenty of mutual compliments between the cast and creative staff, intercut with film clips and video from the set. It’s frankly difficult to glean anything more from this piece than that everyone had a great time working with each other. An opportunity was missed here to really address how the movie dealt with the issues of the book, and to discuss what Paul Weitz was really trying to accomplish. Instead of that, we are left with only the usual EPK material.My Scenes – The usual Blu-ray bookmarking feature is available here, allowing the viewer to set their own bookmarks throughout the film.BD-Live – At the time of review, I was unable to activate any BD-Live functionality and I could not find a link to it in the main menu.DVD Copy – A second disc is included in the package, holding the standard DVD of the movie. It contains the movie presented in standard definition in an anamorphic 2.40:1 picture with Dolby Digital 5.1 sound in English (@448 kbps) and Spanish. The featurette is also included. A “Previews” menu allows access to anamorphic trailers for For A Good Time Call…, 30 Rock, Baby Mama, Role Models, The 40 Year Old Virgin, Wanderlust, Knocked Up and This is 40.Digital Copy – Instructions are included in the packaging for obtaining a digital or Ultraviolet copy of the movie for your your laptop or portable device. Subtitles are available for the film and the special features, in English, Spanish and French. A full chapter menu is available for the film.

Admission sadly is another Paul Weitz movie that has good intentions but badly misses the mark. As an adaptation of Jean Hanff Korelitz’s book, Weitz misses the tone and much of the point of the material. As a light romantic comedy, the movie contains too many downbeat elements to keep itself afloat. And by the end of the movie, the story no longer makes sense – it’s lost the thread of its theme and the characters are not acting in what could be thought of as a believable manner. What’s most frustrating is that the elements of a good movie are present. Tina Fey gives a good performance, hinting at more depth than we’ve seen from her in the past. Paul Rudd and Lily Tomlin are also very good. Paul Weitz still has those moments of comic invention that can briefly surprise the audience with a laugh. But a few isolated laughs does not a satisfying movie make, particularly when the rest of the movie is so problematic. The Blu-ray presents solid picture and sound. Fans of Tina Fey or Lily Tomlin may wish to rent this. Fans of the book have already been warned.

I didn't care for this at all. There is a decent movie in there somewhere, the problem is it was billed as a romantic comedy and I ended up watching a drama with one or two funny moments, not what I was in the mood for.

My thoughts. I personally thought it was terrible bordering on offensive. But, that's me. Tina Fey just hasn't really found the right vehicle for her.

I believe that Tina Fey will give a strong serious performance at some point in the next five years. She just needs a better script and a much stronger director. Based on the potential I saw even in this movie, people may be surprised at what she can do in that area.
You must log in or register to reply here.