There’s an awesome amount of energy expended in the musical numbers of the under heralded Absolute Beginners directed by Julien Temple, and while the dancing and production values will at various times remind one of dances in Oliver!, West Side Story, or Ken Russell’s The Boy Friend, that doesn’t lessen its very real entertainment value. The script is all over the map, inconsistent in tone and lacking in depth when things turn serious, but it’s an overall delightful little bauble that briefly glimmered at the very moment movie musicals were so out of favor. 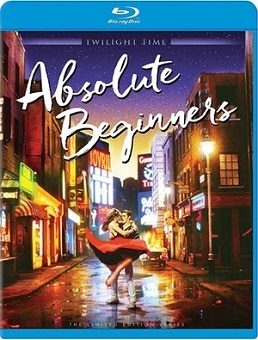 It’s 1958 London, and young lovebirds Colin (Eddie O'Connell) and Suzette (Patsy Kensit) are living an idyllic life away from home while pursuing careers (he’s a photographer; she’s a designer) and enjoying the beginnings of swinging London where pretty much people of all sorts were being allowed to live their own lives on their own terms. But Suzette stumbles blindly into setting a new, hip fashion style that brings her to the attention of elite designer Henley of Mayfair (James Fox) who whisks her into a social life that leaves her friends in Kensington in the distance. Colin longs for them to reconnect, but she impulsively marries Henley which causes Colin to cast off his scruples and become one of the glitter people; that is, until a white supremacy group led by the viciously racist Flikker (Bruce Payne) and his group of punk bigots begin systematically to eliminate all of the blacks and other undesirables in Colin’s neighborhood which rouses him out of his torpor and spurs him to action.

The movie’s opening title number which introduces us to our main characters and their neighborhood friends (the film is narrated by Eddie O'Connell’s Colin) immediately establishes the movie’s pop and jazz sensibilities with folks dancing and tumbling in the streets as the catchy rhythms alert the viewer to the movie’s musical motif (it may be set a century after Oliver! but you’ll get the same energetic lift from the spirited dancing and the engaging personalities of the motley assortment of friends that Colin has). The script by Richard Burridge, Christopher Wicking, and Don MacPherson is an inconsistent thing with tones that shift from light-hearted to deadly brutal in the blink of an eye and character development that is spotty and not always completely satisfying, but the numbers, often borrowed from other musical movie ideas as they may be, are always involving and richly entertaining. Suzette’s anthem of professional desire “Having It All” is counterbalanced by Colin’s devastated song of rejection “Have You Ever?” and his later succumbing to the lures of celebrity in “I’m Selling Out.” Colin’s dad offers an ironic comment on his miserable, chaotic home life in “Quiet Life” (which director Julien Temple stages in a house set split down the middle so we can better observe what’s going on all over it (reminding one of similar set designs in stage works as diverse as Bye, Bye Birdie and the later musical version of The Secret Garden). David Bowie’s guest appearance as Vendice Partners in persuading Colin to become a “professional teenager” sings and rudimentarily tap dances to “That’s Motivation,” staged in part on a giant typewriter recalling some of the elaborate oversized sets from Ken Russell’s The Boy Friend, and no one can possibly mistake the climactic showdown between the bigots and the neighborhood residents fighting for their turf that combines West Side Story’s “Cool” and “The Rumble.” Throughout, director Temple keeps the camera moving so that scenes are never static, but the musical numbers haven’t been razor cut to death gaining their energy from performance and not from rapid-fire editing techniques.

Patsy Kensit and especially Eddie O'Connell make for an engaging pair of protagonists, and while their singing voices aren’t legendary, they get their vocal chores done with a minimum of fuss. James Fox is a snooty, prissy Henley while Ray Davies earns some grins as Colin’s put-upon father. Steven Berkoff’s disturbing cameo as a Hitler-like fanatic preaching racial hatred and Bruce Payne as the street thug who carries out his orders are both quite mesmerizing. Anita Morris wraps those fabled long legs around a couple of numbers dressed in what appears to be a variation of her costume from the stage version of Nine, while David Bowie impresses as the unctuous executive who lures Colin to the Dark Side. As his various street buddies, Tony Hippolyte as the jazzy Cool, Joe McKenna as the gay Hoplite, Eve Ferret as no-nonsense Big Jill, and Graham Fletcher-Cook as frenemy Wizard all make solid impressions. Sade makes a cameo appearance unflappably crooning the bluesy “Killer Blow,” but despite its entertainment value, it could easily have been eliminated, notwithstanding the singer’s inarguable style and popularity.

The film’s 2.35:1 original theatrical aspect ratio is faithfully presented in this 1080p transfer using the AVC codec. While sharpness varies from good to very good, there are occasional dust specks noticeable. The vibrant, neon colors are beautifully presented, and black levels are very, very rich and deep. Skin tones appear quite natural. Contrast has been consistently achieved. The movie has been divided into 24 chapters.

The disc offers DTS-HD Master Audio in both 2.0 stereo and 5.1 surround configurations. I listened to approximately half of the film with each one of the tracks, and both are equally effective. The 5.1 has a little trouble with reproducing dialogue succinctly with it occasionally fading a bit when music and sound effects are more prominent. There is a bit of directionality to the dialogue, too, which is always welcome though the majority of the dialogue and song lyrics have been placed in the center channel.

Six-Page Booklet: contains a rich selection of color stills, original poster art on the back cover, and film historian Julie Kirgo’s essay which offers a fair assessment of the film’s strengths and weaknesses.

At the time of this film’s production, London musical theater was ablaze with the sung-through pop operas of Les Miserables and The Phantom of the Opera, both monster hits. Absolute Beginners, then, offers a surprisingly fresh approach to a musical from those super serious, heavy pieces that even in its own serious moments offers an infectiousness and speed that made it quite an anomaly at the time (and might explain why it didn’t really catch on with the public then). There are only 3,000 copies of this Blu-ray available. Those interested should go to www.screenarchives.com to see if product is still in stock. Information about the movie can also be found via Facebook at www.facebook.com/twilighttimemovies.

I imagined that I could be safe forever by betting that nobody would ever have a good word for ABSOLUTE BEGINNERS, a legendary disaster, that, coupled with REVOLUTION, sank Goldcrest.


I saw it under ideal conditions in 70mm at The Odeon Marble Arch and have never wavered from my belief that it's a total stinker. 'Only 3,000 copies available' would almost serve for the entire first run audience as most people, including me, would graciously decline the generosity.


It must be true that everything eventually benefits from the passage of time but I believe that this & REVOLUTION, of which I saw a few minutes on tv recently, should be honourable exceptions.


As 70mm 6 track first run prints were made it's strange that you seem to imply that it's only 2 track with the 5.1 somehow derived via fakery.

I implied no such thing.

I'm sorry if I read it wrongly but because you listed the 2.0 before the 5.1 I took it as meaning it wasn't genuine multitrack.

Thanks for the review! I've always loved this movie.


For what it's worth, the 2.0 track is the better. There's some odd mixing done in the 5.1, particularly during Slim Gaillard's 'Selling Out' - the duelling vocal lines in the first verse are panned hard left and hard right (as they should be), but in the 5.1 track, the voice on the right is absolutely blasting, while the one on the left is barely audible in comparison.


There are other odd bits as well, but this one was the most glaring. The 2.0 does the job much better.