Abilene Town is an above-average Randolph Scott western which has been in public domain hell for years. According to IMDB, there have been at least 22 DVD releases of the film, varying in quality from acceptable to nearly unwatchable. Panamint Cinema, a small home video company in Scotland, has now released a region-free Blu-ray of Abilene Town which, while not perfect, easily surpasses every other currently available version of the film. 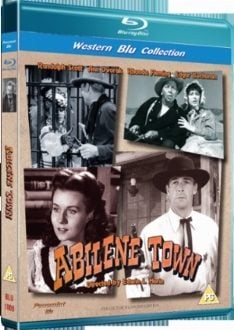 Abilene Town, which was released by United Artists in 1946, proved to be a turning point in the film career of Randolph Scott. Previously he had appeared in many westerns, but he also was cast in other genres such as war films (Gung Ho!, Corvette K-225, Bombardier, To the Shores of Tripoli); straight drama (Pittsburgh); comedy (My Favorite Wife); and even a pirate film (Captain Kidd) and musicals (Follow the Fleet, Roberta). After Abilene Town he decided to focus almost exclusively on westerns. He explained his decision in an interview with Hedda Hopper. "They [westerns] have been the mainstay of the industry ever since its beginning. And they have been good to me. Westerns are a type of picture which everybody can see and enjoy. Westerns always make money. And they always increase a star's fan following." Scott certainly knew what he was talking about. He retired after making Ride the High Country in 1962, and when he died in 1987 he reportedly was worth $100 million.

The action takes place in Abilene, Kansas, five years after the end of the Civil War. The town Marshal is Dan Mitchell (Randolph Scott), who has two rules for the hard-drinking cowboys who come to Abilene at the conclusion of cattle drives: they have to check their guns when they enter a saloon, and they are not allowed to cross Texas Street, the main thoroughfare in town. The saloons are on one side of Texas Street and the town merchants are located on the other side.

On Sunday morning Dan attends church with Sherry Balder (Rhonda Fleming), whose father owns the town's general store. The service is interrupted by the sound of gunshots across the street. Dan investigates and discovers that a cowboy has defied the "no guns" rule and is firing his pistol during a singing performance by showgirl Rita (Ann Dvorak). After confiscating the gun Dan is kicked in the shin by Rita, who is annoyed that he interrupted her song. It becomes apparent that both Sherry and Rita have a romantic interest in Dan.

Although the cattle business is what drives the economy of Abilene, homesteaders have been arriving to settle on free government land. The cattlemen, led by a man named Ryker (Dick Curtis), are opposed to the homesteaders because the cattlemen want the range to remain open. Charlie Fair (Richard Hale), who owns the saloon where Rita performs, sides with Ryker because the free-spending cowboys are his bread and butter. Charlie hires a gunslinger named Jet Younger (Jack Lambert) to lead a nighttime raid against the homesteaders, and the marauders burn and pillage homes and barns. When a witness identifies Jet Younger as the leader of the raid, Dan has to persuade the reluctant county Sheriff Bravo Trimble (Edgar Buchanan) to go after him. The sheriff, who provides some comedy relief, is not particularly interested in pursuing bad guys. "Sometimes accidents happen and fellers get killed," he rationalizes to Dan. "Why get hot under the collar about it? And why go hunting for fellers who don't want to be found?"

Randolph Scott is stout and resolute as Marshal Mitchell, a man who would like to see Abilene become a peaceful town but who is not reluctant to use his gun and fists in the meantime. Rhonda Fleming, in one of her earliest roles, is prim and proper as Sherry. Ann Dvorak, who shares top billing with Scott, has a juicier role as the free-spirited and sexy Rita, who frets that Dan will get killed if he insists upon keeping his $4.00/day job. Edgar Buchanan is amusing as the sheriff who would rather drink and play cards than enforce the law (at one point the sheriff tells Dan that he considered going back to practicing dentistry, and in real life Buchanan was a dentist before becoming an actor). Jack Lambert and Dick Curtis are effective villains. Lloyd Bridges has a small but important role as Henry Dreiser, the leader of the homesteaders who also takes an interest in Sherry. The film is well-paced by director Edwin Marin, and the story is adapted from a novel by Ernest Haycox. We have seen many westerns about cattlemen vs. homesteaders, but Abilene Town is very well-made and has an original and unusual resolution to the story.

Abilene Town is framed at 1.37:1 and is encoded at 1080p with the AVC codec. The black & white image is consistently sharp, boasting strong contrast and deep blacks. The film elements used to make this transfer are not entirely free of damage, but the few video hiccups are brief and not distracting. The fine cinematography by Archie Stout (Fort Apache, Hondo) has probably not looked this good since the film's theatrical run. The end notes state that it was made from 35 mm elements and scanned in 2k. The film elements are from a British Film Archive print and the Blu-ray includes both the British Board of Film Censors certification and the United Artists logo.

The LCPM 2.0 48k audio has a few more problem areas than the video, with age-related hiss, minor crackling and occasional pops, but overall the dialogue is clear and understandable and the musical score, which features three bouncy songs by Ann Dvorak, has good fidelity. Ambient sounds of locomotives, gunshots and fires are quite strong.

The only extra on this Blu-ray disc is the theatrical trailer for Inferno, which also is available on Blu-ray from Panamint. The film is divided into nine chapters.

Also included with the disc is a 16-page illustrated booklet which contains the film's credits, a short essay by Rhonda Fleming (this Blu-ray was released earlier this month on Ms. Fleming's 92nd birthday), an excerpt from "The Films of Randolph Scott" by Robert Nott, and cast & crew biographies.

This Blu-ray also has a reversible cover. The cover which is pictured above includes four black & white stills from the film, but if you prefer one with a shot of Randolph Scott embracing Ann Dvorak you can slip the cover out and reverse it, which is a nice touch.

Abilene Town is a very good public domain western which is available on DVD in numerous incarnations, many of which are of very poor quality. I have the Marengo DVD (a double feature with Santa Fe Trail), which is one of the better releases, but it pales in comparison with this Blu-ray.

My score reflects the fact that Panamint has done an excellent job in putting out a highly satisfactory Blu-ray release of a long-neglected public domain film. The company deserves our support. You can check out this and their other Blu-ray releases at the Panamint Cinema website. . An upcoming release which intrigues me is Jacques Tourneur’s Canyon Passage.

I have included an Amazon link, but you may save a few dollars by ordering directly from Panamint.

I wonder if the audio was captured at the same time as the image harvest, as a sort of scratch track, or whether it was harvested seperately?

Robert Harris said:
Thanks for reviewing.

I wonder if the audio was captured at the same time as the image harvest, as a sort of scratch track, or whether it was harvested seperately?

The packaging doesn't give any information about what work they did on the audio. Considering that there are multiple DVD versions out there, I doubt that Panamint could justify spending a lot of money on cleaning up the audio.

Thank you for the review. I agree with everything you've said.

Thanks for the review, I watched my Blu-ray last week and concur with your review.

I don't think anyone will be disappointed ordering CANYON PASSAGE. The DVD image was quite good. And Turner Classic Movies will be showing it September 3rd. TCM's article on the movie is here

If I hate anything its those PGs on the DVDs and blu rays in Great Britain___This is a reversible sleeve so couldnt they fucking remove this PG at least on one side like Arrow Academy does??

If I hate anything, it's people with no manners and no self-discipline who use four letter words without consideration for the fact that this is a public forum visited by a wide variety of people, some of whom dislike foul language intensely.

Thanks for the review and thanks to Panamint for making the effort on this title!
M

Here Here!
You must log in or register to reply here.