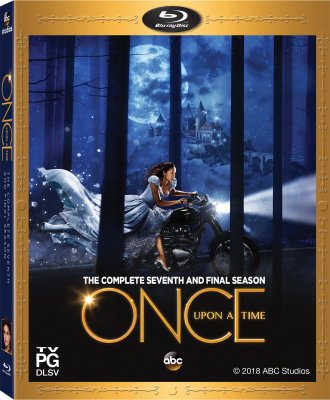 GET YOUR HAPPILY EVER AFTER:

SYNOPSIS: Celebrate the epic adventure and enduring magic as television’s most bewitchingly tangled tale concludes in “ABC’s “Once Upon a Time: The Complete Seventh and Final Season.” A few years after the Final Battle in Storybrooke, a grown-up Henry Mills leaves home in search of his own destiny. What he finds is true love with a new incarnation of Cinderella and unexpected danger from her hateful stepmother and stepsister—plus the added menace of Mother Gothel, a villainous sorceress. And when a new Dark Curse erases his and everyone else’s memories, it’s up to Henry and Cinderella’s daughter Lucy, with the help of Regina, Wish-Realm Hook, Gold and Zelena, to defeat Gothel and end her reign of terror. If they succeed, will Rumple and Belle ever be reunited? Will Regina finally get her happy ending and will all past memories be restored?


Take the last leg of this astonishing journey with all 22 episodes—plus bonus extras—in the final, captivating season of the ultimate struggle between good and evil: “Once Upon a Time.” Bonus includes:

o I Know Who You Are

o If She Can Change …

At its core, “Once Upon a Time” is a story about hope. As the sensational series concludes, the residents of the Enchanted Forest face their greatest challenge yet as The Evil Queen, Captain Hook and Rumpelstiltskin join forces with a grown-up Henry Mills and his daughter, Lucy, on an epic quest to bring hope to their world and ours. New and old fairy tale characters search for true love, find adventure and take sides in the ongoing struggle of good against evil.

The UK is releasing a complete series set on October 8 currently £48.91 shipped to the USA Season 1 to 6 have been Region Free. 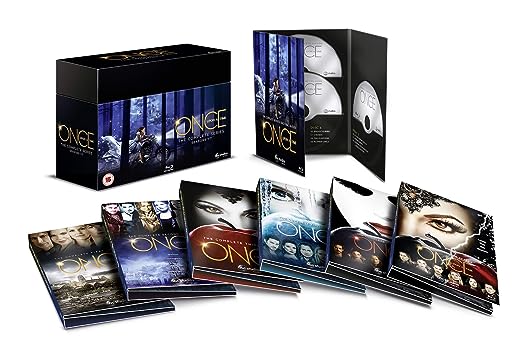 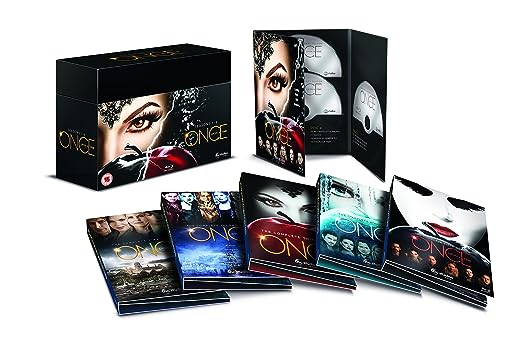 Odd choice for a cover for the season 7 and series box set. Using Cinderella, a character not liked by many fans, whose role was reduced greatly by the end of the season. I would think a picture of the 2 Henrys would be a better representation of Season 7.

For whatever reason this is one of the few ABC series where all seasons made it to blu ray. Since its ratings were not great by the end it would be surprising that this sold more on blu than other series that were discontinued on blu after a few seasons.
Last edited: Sep 4, 2018 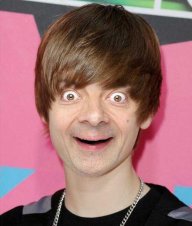 Garysb said:
The UK is releasing a complete series set on October 8 currently £48.91 shipped to the USA Season 1 to 6 have been Region Free.

Is season 7 terrible?
We were binge watching but stalled during season 4.

Garysb said:
The UK is releasing a complete series set on October 8 currently £48.91 shipped to the USA Season 1 to 6 have been Region Free.

The back of the case for S7 shows it to be region free (regions A/B/C). I'd expect the complete series to also be region free. That's pretty normal for a Disney BR title.

Yugo Parrump said:
Is season 7 terrible?
We were binge watching but stalled during season 4.
Click to expand...

Most of the cast left after season 6. Season 7 had Regina, Hook, and Rumple from the previous seasons. They were cursed with different identities. The rest of the regulars were new. Many of the old regulars made an appearance or two. Until the last episodes season 7 was quite a different show. The finale of Season 6 served as a good series finale. Not much gained by watching season 7.
Reactions: holtge and Jake Lipson

Season 7 was saddled with an amnesiac Henry, Regina and Gold. Meanwhile, we have the alternate universe Hook and his alternate universe Alice in Wonderland daughter. Everything was off. As for Cinderella, all she ever does is chase after her sassy daughter and sell beignets out of a roach coach. In fact, if you do have to watch Season 7, you would benefit by making it into a drinking game. Everyone has to drink whenever a character says "beignets."

Hmm... thanks for the info Ethan and Gary. When we finish the show we're on now we plan to go back and watch through season 6. Maybe digest that and watch season 7 sometime in the future.