Woody Allen’s uneven variation on Ingmar Bergman’s magically intoxicating romantic comedy Smiles of a Summer Night arrived in 1982’s A Midsummer Night’s Sex Comedy. While there are the usual Allen preoccupations with sexual attraction and the battle between intellectualism and humanism, the film misses the magic and eroticism of Bergman’s masterpiece. Played more for the comedy in its title rather than for the inexorable lure of sexual attraction, Allen’s opus is not one of his stronger films of the 1980s. It’s beautiful to look at certainly, and some witty lines naturally hit their mark, but one wishes his first film to feature Mia Farrow were stronger in retrospect. He certainly did justice to her talent in later movies. 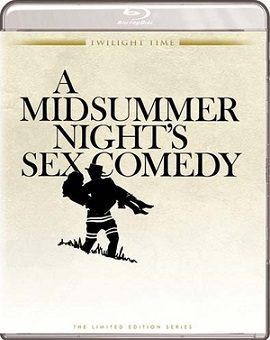 Frustrated married couple Andrew (Woody Allen) and Adrian (Mary Steenburgen) have invited two couples to join them for a pleasant weekend in the country: soon-to-be-married Leopold (Jose Ferrer), an obtuse professor, and his much younger fiancé Ariel (Mia Farrow) and serial womanizing doctor Maxwell (Tony Roberts) who brings along his nurse Dulcy (Julie Hagerty) for a weekend fling. Seeing Ariel again after many years stirs many regrets and passions within Andrew, but he must not only contend with her fiancé but also with Maxwell who flips for her when he first lays eyes on her. Adrian, who hasn’t made love to Andrew in six months, fears she’s going to lose him if she doesn’t take action, and Dulcy, being something of an expert in sexual adventurousness, gives her some pointers to bring her marriage back to life.

As in the Bergman film, Woody’s couples remain in flux until the final fadeout though the sexual tension seems missing in the film: intense passions are talked about rather than acted upon, and Allen’s script always sacrifices real eroticism for a witty line or a bit of buffoonery (admittedly, a couple of faux sex scenes on various tables are funny in their clumsiness, and the second one occurs while Jose Ferrer drones on with an adenoidal rendition of “The Lord’s Prayer.”) The gorgeous cinematography of Gordon Willis captures the weekend’s early activities (before the hanky-panky) so wonderfully: playing badminton and archery, fishing, taking snapshots, hunting butterflies (yes, it’s a turn of the century comedy of manners though there are a couple of anachronistic expressions inserted into the mouths of characters that aren’t worthy of Woody at his finest), and there are some graceful shots of a couple talking shown in a mirror or dinner outside at twilight that are ravishing examples of cinematic art. But the movie really only works in fits and starts, and an attempt to insert a magical aura (as Bergman did so successfully in his movie) into the events of the weekend with an otherworldly, unpredictable astral lamp falls rather flat.

By making Mia Farrow the center of attention for all three male leads, Woody Allen proves in his first film with her how important she’s going to be for his work for the next decade. She herself is charming and soft spoken, not at all the voracious sexual paragon she’s described to be in her own words. The surprise of the film, however, is Julie Hagerty who at first appears to simply be recycling the airhead stewardess from Airplane! but in actuality is a lot more on the ball and has something to teach all of the men. Mary Steenburgen seems a little lost amid the other players as the frigid wife trying to solve her sexual hang-ups and make a new start with her husband. The obnoxiously pompous and irritatingly egotistical professor know-it-all is in good hands in the person of Jose Ferrer (so arrogant he assumes everyone will want to hear him sing a selection of songs after dinner). Woody Allen, of course, plays his usual movie self, frustrated with relationships and in constant need of encouragement and solace, and Tony Roberts plays well once again the predator with an insatiable sexual appetite.

The film’s original 1.85:1 theatrical aspect ratio is faithfully delivered in a 1080p transfer using the AVC codec. Other than the deliberately soft-focused shots in the film where cinematographer deluxe Gordon Willis is going for something ethereal and almost other-worldly, the transfer is sharp and beautifully detailed with only the odd dust speck here and there to be glimpsed. Color is nicely balanced and quite accurate other than perhaps an occasional over pinkness in some of the skin tones. Black levels are excellent, and contrast is usually nicely balanced. The movie has been divided into 24 chapters.

True to the sound mixes of these years, the mono mix favored by Woody Allen is presented in DTS-HD Master Audio 1.0. The dialogue-heavy film is always completely discernible balanced nicely with the occasional sound effect and the Felix Mendelssohn classical excerpts which serve as the film’s background score. There are no age-related problems with hiss, crackle, thumps, or flutter.

Six-Page Booklet: contains a lovely selection of color stills, original poster art on the back cover, and film historian Julie Kirgo’s warm appreciation of the movie.

Woody Allen’s first film with Mia Farrow, A Midsummer Night’s Sex Comedy, may not be their best one together (indeed, it ranks near the bottom of their tandem efforts), but it’s nevertheless one of his loveliest looking films and contains enough of the Allen wit and charm to make it definitely worth seeing especially in high definition. There are only 3,000 copies of this Blu-ray available. Those interested should go to www.screenarchives.com to see if product is still in stock. Information about the movie can also be found via their website at www.twilighttimemovies.com or via Facebook at www.facebook.com/twilighttimemovies.

Allen's "spiritualism" movies tend to be his worst (Magic in the Moonlight, You Will Meet a Tall Dark Stranger, etcetera) but I figured this would look nice when I bought it.

MAGIC IN THE MOONLIGHT is much worse than SEX COMEDY.

I watched this the other night and laughed the hardest I have laughed in a long time.

Mark Walker said:
I watched this the other night and laughed the hardest I have laughed in a long time.
Click to expand...

I agree that this time through, I noticed more choice lines than in many previous viewings. However, this film and September are my least favorites of the Woody-Mia years.

sorry its better than September,not to mention his latest films which are plain unfunny

Peter Neski said:
sorry its better than September,not to mention his latest films which are plain unfunny
Click to expand...

I agree; it is better than September, but I don't think it can hold a candle to Broadway Danny Rose, The Purple Rose of Cairo, Zelig, Radio Days, or, of course, Hannah and Her Sisters.
You must log in or register to reply here.