Director Alan Rickman’s A Little Chaos is an enjoyable and romantic period drama set against the creation of King Louis XIV’s gardens at Versailles, starring Kate Winslet, Matthias Schoenaerts, Stanley Tucci, and Rickman. Historians will likely thumb their noses at the inaccuracies of the plot, but that’s half the fun of the movie. 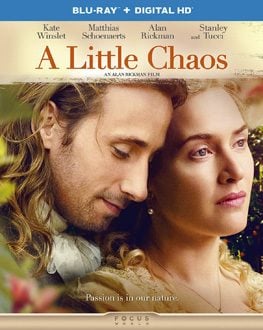 There is an outdoor ballroom in the gardens of Versailles.
In what follows, that much at least is true.

It is that opening title card that sets the tone of Alan Rickman’s A Little Chaos, a delightful, romantic costume drama set in 1682 Paris. King Louis XIV (Alan Rickman) has hired landscaper Andre Le Notre (Matthias Schoenaerts) to construct the gardens at Versailles. As the film opens, Andre is interviewing contractors to complete various projects as part of the garden. Sabine De Barra (Kate Winslet), a widow with non-traditional sense of gardening, presents some ideas during her interview, at first dismissed by Andre as “chaos,” which Sabine answers as being uniquely French but not sticking with the past. Andre expands on one of Sabine’s plans, hiring her to construct a fountain surrounding an outdoor ballroom. As the project is underway, Sabine, a commoner, begins to get noticed by the elite, and finds herself invited to the Louvre, meeting and befriending the King’s bisexual brother, Philippe (Stanley Tucci) and his wife Elizabeth (Paula Paul). Sabine even befriends the King in what is perhaps the best scene in the film, where Louis, after losing his wife the Queen, wants solitude in the garden’s nursery, and Sabine mistakes him for the garden’s horticulturist. Through these encounters and visits to the ballroom construction project, Andre and Sabine begin to fall in love, much to the chagrin of Andre’s wife, Francoise (Hope Hancock), who has been enjoying a one-way open marriage, and in a jealous rage tries to destroy the ballroom. Andre finds a glove owned by Francoise at the site, confronts her, and leaves her for Sabine. They eventually spend the night together, leading to Sabine reliving the tragedy that struck her husband and young daughter. This all leads to the grand presentation of the completed ballroom to the King, who is delighted by the artistry of it all.

Many may find the plot of A Little Chaos to be preposterous or at the very least unlikely that a female commoner would have the opportunity that Sabine has in the film. Historical inaccuracies aside (Andre was 25 years older than Louis XIV, but the film portrays him as 30 years younger), it’s an entertaining little film that fans of Jane Austen would enjoy. Each of the main characters is dealing with some sort of loss, and that is really the underlying thread of the film. All of the performances are excellent, especially Winslet as the troubled widow trying to get by with her gardening talents, Schoenaerts as the brooding love interest, Rickman as the King who often longs to live as a commoner, and Tucci provides some nice comic relief as the odd brother. The cinematography by Ellen Kuras (Blow, Eternal Sunshine of the Spotless Mind) captures the beauty of the Versailles gardens as well as its cast and costume design.

The DTS-HD Master Audio 5.1 soundtrack is what one would expect of film of this type. Dialogue is directed mostly to the center channel, and remains clear and distinguishable throughout, never getting drowned out by Peter Gregson’s score or atmospheric sound effects. Surrounds are used sparingly, mostly to recreate the acoustics of the King’s palace and the sounds of nature in the garden.

Full of fine performances, A Little Chaos will likely entertain fans of period costume dramas as well as fans of many of the cast members. I’ve always liked Rickman, and it’s good to see him finally break free of the typecast villains he played from the late 1980s and early 1990s in films such as Die Hard, Quigley Down Under, and Robin Hood: Prince of Thieves.

I was deeply saddened to hear of Alan Rickman's death. The actor made his mark on Hollywood with his breakout role as Hans Gruber in Die Hard, but would find himself typecast in similar roles as the villainous Elliott Marston in Quigley Down Under with Tom Selleck and as the Sheriff of Nottingham in Robin Hood: Prince of Thieves with Kevin Costner. Rickman had a great sense of comic timing, as evidenced in Galaxy Quest in which he played a theatre-trained actor remembered best as an alien scientist from a short-lived science fiction TV series, and as the angel Metatron in Kevin Smith's religious satire Dogma. Younger moviegoers knew him best as Snape from the Harry Potter films. Rickman lent his voice as Marvin the Paranoid Android in the movie version of Douglas Adams' Hitchhiker's Guide to the Galaxy, and appeared in several under-rated independent films, including Bottle Shock, Love Actually, and the HBO TV movie Something the Lord Made. The actor also directed two movies, The Winter Guest and A Little Chaos. His final performances will be in Eye in the Sky as Lt. General Frank Benson, due to hit theaters this March, and once again as the voice of the Blue Caterpillar in Disney's Alice Through the Looking Glass scheduled for release this summer.

Todd I was also saddened to hear of Alan's passing. Always enjoyed his work. Enjoyed A Little Chaos also.
You must log in or register to reply here.