A sure sign of a film written by Joseph L. Mankiewicz is in its scintillating dialogue: wonderfully expressive communication that never seems like preaching or pontificating. A Letter to Three Wives is filled with such talk, and it comes just as interestingly and succinctly from the mouths of the hoi polloi as it does from the educated or the wealthy. It’s little wonder that it won for the director an Academy Award for screenwriting, and it helps to make the film one of real classics of the postwar era dealing with a triad of personal relationships which touch on myriad social conundrums and all wrapped up in a sparklingly involving concoction. 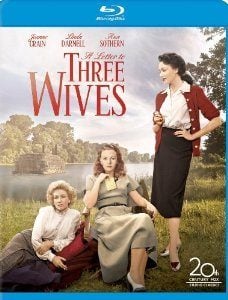 When town vixen Addie Ross (the voice of Celeste Holm) leaves a note for three of her women acquaintances informing them that she’s run off with one of their husbands (without saying which one it is), it allows each one of them to ruminate about her own marital relationsip. For Deborah (Jeanne Crain), it’s a moment to ponder whether her unsophisticated background was enough to drive rich husband Brad (Jeffrey Lynn) into Addie’s waiting arms (they had dated years before he had gone into the service and met her). Rita (Ann Sothern) wonders if her late night hours writing for a forgettable radio drama and earning a show business salary far in excess of her schoolteacher husband’s (Kirk Douglas) earnings might have soured him on their relationship. For Lora Mae (Linda Darnell) who came from a lower class hovel and married her wealthy boss (Paul Douglas) whom she feels doesn’t either love or respect her, it’s not so much fear as resignation of a lost opportunity to prove to her husband that she didn’t marry only a meal ticket but rather the man she has grown to love. Eventually, the woman learn the truth and come face to face with what really matters in each of their relationships.Mankiewicz boiled down the original five wives (from John Klempner’s novel) to three and was able to flesh out their individual stories beautifully. Each of the three segments has its own rhythms and shadings (the Jeanne Crain one is the least interesting though seeing the beautiful actress in probably the ugliest dress ever designed for a Hollywood star does give the segment a certain notoriety), and Mankiewicz directs the slight slapstick tomfoolery in the first, the brilliantly conceived, written, and performed dinner party in the second, and the ritualized courtship of Lora Mae (who refuses to go all the way without a wedding ring) in the third with attention to detail and an amazing ability to focus on individuals without sacrificing the group dynamic which would be a hallmark of his directorial style throughout his entire career. The second segment with its mix of a loving couple surrounded by a motley crew of the crass and the heartless and topped by the scene-stealing antics of the priceless Thelma Ritter as an unwilling maid certainly suggests the brilliance to come the next year with the writer-director’s masterwork All About Eve. But A Letter to Three Wives is no bridesmaid. With its shrewd comments on social mores and an acerbic look at a broad spectrum of humanity, it can stand with the best of the films from this cinematic master craftsman.Linda Darnell and Ann Sothern are the standout stars of the film, each embodying her role with a zest and fire that suit their individual characters beautifully. Jeanne Crain is a decidedly lesser presence in the less interesting role of the farm girl who marries wealth and then tries to live up to it. Accordingly, the actors playing the husbands of Darnell and Sothern – Paul Douglas and Kirk Douglas – strike their own sparks in flinty character parts. This was Paul Douglas’ screen debut, and he acquits himself admirably as the brash businessman who eventually learns to prize the gem he’s landed. Kirk Douglas as the dedicated and plainspoken teacher who eventually snaps and tells his wife’s boss exactly what he thinks of the drivel the radio is offering shows the kind of restraint that would be harder and harder for him to manage in the decades to come. Just as with his on-screen wife Jeanne Crain, Jeffrey Lynn doesn’t register nearly as powerfully in an underwritten role. Connie Gilchrist and Thelma Ritter give wonderfully funny performances as some folks from the wrong side of the tracks (literally, in a running gag that works every time). Florence Bates makes a memorable impression as the monster boss whose thoughtlessness and lack of real class are stamped on her every word and gesture.

The film’s original theatrical aspect ratio of 1.33:1 is faithfully reproduced in this 1080p transfer using the AVC codec. Sharpness is superb throughout (apart from glamour close-ups particularly of Jeanne Crain), and there is detail to be seen in facial features and hair. The grayscale is wonderfully realized with its crisp whites and inky blacks. In fact, apart from a few wayward specks early on and some momentary line twitter, the encode is free from age-related artifacts. The film has been divided into 18 chapters.

The DTS-HD Master Audio 1.0 sound mix is more controlled and a bit tighter than the slightly louder Dolby Digital 2.0 stereo track which is also provided. The dialogue has been well recorded and is always completely discernible, a good thing for a film in which what is said is so vitally important. Alfred Newman’s score has a reasonable amount of fidelity, and the track overall is free from any hiss or other age-related problems. The stereo track does offer a lovely spread for Alfred Newman's score but otherwise doesn't offer much of a difference with the lossless mono mix.

Audio Commentary: Christopher Mankiewicz (son of the writer-director) and authors Kenneth Geist and Cheryl Lower have all been recorded separately with their comments edited together quite deftly to form an interesting and informative commentary track.Biography: “Linda Darnell – Hollywood’s Fallen Angel” (44:03, HD): another in A&E’s Biography series narrated by Peter Graves and this time focusing on the relatively brief and mostly sad life of Linda Darnell.Movietone Newsreel (1:15, HD): brief clips of the 1949 Oscar ceremony featuring Joseph Mankiewicz’s win for best screenwriting (he also won Best Director at the same event).Theatrical Trailer (2:43, HD)

A great Hollywood classic which features sparkling writing and brilliant performances, A Letter to Three Wives is a welcome addition to the growing number of Fox Blu-rays of the studio’s best films. Highly recommended!

Thanks Matt. This is one of my favorite films and one I voted for daily when we were working with Fox on Voice your Choice. I'm glad to see this come to Blu-ray.

Yep, a funny closing line with its visual topper.

Most people would say it's not worth nit-picking over, but the AR has been altered from 1.37:1 to 1.33:1. I understand why they do that on DVDs as 1.33:1 is native for non-anamorphic encodes, but there is no reason to do it on Blu-ray. To me it's a significant alteration resulting in the loss of 40 pixels, and I don't understand why the practice continues on Blu-ray. [/rant]

I didn't actually measure it. I just used the information in the liner notes. Perhaps the ratio is what it should be and the numbers are wrong.

Looking forward to this. I've never seen it. Thanks for the review, Matt!

I'm pleased with the disc. The upgrade from the very good DVD is bigger than I had expected. The sound is massively better.

I watched this again last night. What a magnificent movie it is: so smart and funny and satirical, and the central mystery of which husband has run off with the notorious Addie Ross keeps propelling the narrative forward with such verve! I really do think it's one of the all time greats!

Matt Hough said:
I watched this again last night. What a magnificent movie it is: so smart and funny and satirical, and the central mystery of which husband has run off with the notorious Addie Ross keeps propelling the narrative forward with such verve! I really do think it's one of the all time greats!
Click to expand...

This has been on my radar for a re-watch recently, too. It really IS one of the all time greats. I'll take this a sign to get off my ass and give it another spin!
You must log in or register to reply here.

B
FOX MAY BE ON ENDANGERED SPECIES LIST, BLU-RAY WISE
8 9 10