A Haunted House buries itself on Blu-ray in an edition that presents this parody in all its unfunny glory. Since I’d like to be very clear about the quality of this movie, I’ll be as direct as possible. This movie is trying so hard to be funny that it wears itself out before telling any funny jokes. It does find some quick ways to be offensive, but nothing that resembles humor as I perceive it. To paraphrase words used to describe Lord Byron, this movie is rude, crude and dangerous to know. And those are its good qualities. 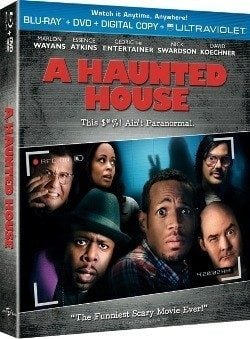 You’re not seeing things. I really did give A Haunted House that rating. This is the first time I’ve given a rating this low since A Good Old Fashioned Orgy. (And if the rating system allowed it, I’d have this down to the one quarter or lower level it really deserves.) Ostensibly, this movie was intended to be the latest Scary Movie – styled parody of current horror trends. The basic idea is to spoof the “found footage” horror movie genre, as most recently powered by the string of Paranormal Activity videos. And there’s definitely some material to work with in that genre. But this movie is coming to the party long after several other movies have already exhausted the mine. So what we have here is Marlon Wayans and a small cast desperately mugging their way through a series of crude gags. I’ve rarely had to say this, but I didn’t find anything about this movie amusing in the slightest. And, just for the record, starting the movie with someone running over a dog is not a path to the land of funny. This is a situation where my recommendation is to run, don’t walk, AWAY from this title. If you choose to rent this anyway, then I will be forced to quote the new Jack Reacher Blu-ray: “Remember, you wanted this.”A Haunted House has been released simultaneously on Blu-ray and standard definition, as of April 23rd. The Blu-ray has everything from the standard DVD, and adds high definition picture and sound. The Blu-ray release includes the DVD release on a second disc within the packaging.

A Haunted House is presented in a 1080p AVC 1.85:1 transfer at an average 30mbps that provides a solid picture with as much detail as the handheld video cameras can provide. As with other “found footage” style movies, the picture quality is actually intentionally lower grade. So the transfer is fine.

A Haunted House is presented in an English DTS-HD Master Audio 5.1 mix in English (averaging 3.1 mbps but climbing to 4.0 mbps in some scenes) that emphasizes loud sound effects and music over any real ideas of atmosphere or subtlety. I suppose a case can be made that the mix accomplishes what it sets out to do.

The Blu-ray presentation of A Haunted House is pretty skimpy when it comes to special features, including only a two minute promotional featurette. The packaging also includes the DVD release. A digital copy is available online via pocket BLU or via a code included in the packaging.How To Survive a Paranormal Presence (2:07 1080p) – This is a two minute promotional feature that spends almost all of its time showing clips from the movie. The remaining 20 seconds or so consists of quick soundbites with members of the cast.My Scenes – The usual Blu-ray bookmarking feature is available here, allowing the viewer to set their own bookmarks throughout the film.BD-Live - This Blu-ray includes access to Universal’s BD-Live online site, allowing for the viewing of trailers online.pocket BLU – This Blu-ray includes the usual pocket BLU functionality, enabling viewers with appropriate laptop, iPad or smart phone integration to remotely control their Blu-ray player and access some of the bonus content from the separate device.DVD Copy – A second disc is included in the package, holding the standard DVD of the movie. It contains the movie presented in standard definition in an anamorphic 1.85:1 picture with Dolby Digital 5.1 sound in English (448 kbps) as well as the English DVS track. The featurette is included, in standard definition. There is also a Previews menu, offering trailers for multiple other DVDs, including several Open Road productions.Digital Copy – Instructions are included in the packaging for obtaining a digital or Ultraviolet copy of the movie for your your laptop or portable device.Subtitles are available for the film and the featurette, in English, Spanish and French. A full chapter menu is available for the film.

If all of this sounds good to you, then I suppose that A Haunted House may be a successful evening at the movies in some living rooms. For myself, I can’t imagine how. This is honestly one of those titles that really makes the reviewing task unpleasant.