Just when you thought it was safe to avoid bad, unfunny parodies, A Haunted House 2 arrives on Blu-ray to give everyone nightmares. As I did when dealing with the first movie last year, I’ll try to be brief here. If you enjoyed the first movie, you’ll probably enjoy this one. If like me, you find this material something like listening to nails scraping down a blackboard, you’ll want to steer well clear. And if you’re not sure, I’ll just say be afraid. Be very afraid. 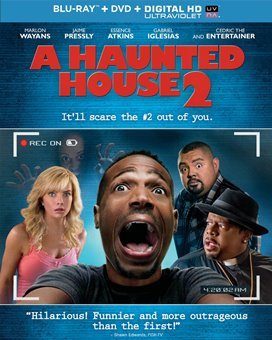 Movies like A Haunted House 2 make me wish I could actually give 0 stars. Like the first infliction last year, this offering is a series of frantic, unfunny jokes that attempt to parody the genre of found footage horror. This time around, Marlon Wayans has a new girlfriend and a new haunted house, but the same really irritating approach to what is really irritating material. And yes, he starts things off by killing another dog, as that was so effective the first time around. There isn’t much more to say here, other than that if you enjoyed it the first time around, you’ll probably like this movie. If you didn’t like the first movie, there’s nothing here to make you stick around.A Haunted House 2 has been released simultaneously on Blu-ray and standard definition, as of August 12th. The Blu-ray has everything from the standard DVD, and adds high definition picture and sound. The Blu-ray release includes the DVD release on a second disc within the packaging.

A Haunted House 2 is presented in a 1080p AVC 1.85:1 transfer at an average 34 mbps that, like the first movie, provides a solid picture with as much detail as the handheld video cameras can provide. As with other “found footage” style movies, the picture quality is actually intentionally lower grade. So the transfer is fine, even if what is on the screen is of a lower quality.

A Haunted House 2 is presented in an English DTS-HD Master Audio 5.1 mix in English (averaging 3.4 mbps) that once again emphasizes loud sound effects and music over any real ideas of atmosphere or subtlety. I suppose a case can be made that the mix accomplishes what it sets out to do, if headache inducement is part of the strategy

The Blu-ray presentation of A Haunted House 2 is a little heftier than what was found on last year’s original movie. Last time, they just had a quick featurette. This time, they’ve included nearly 18 minutes of deleted/extended scenes and a scene-specific commentary, so you now have nearly 2 hours worth of bonus material in the package. The packaging also includes the DVD release. A digital copy is available online via a code included in the packaging.Commentary with Marlon Wayans, Rick Alvarez and Michael Tiddes – (AVAILABLE ON BOTH THE DVD AND BLU-RAY) – This scene specific commentary finds the filmmakers in a chatty mood, as they cover everything they can about the various locations and actors as the movie unspools. There’s a bit of laughter and crosstalk, but if you’re a fan of these guys, you’ll enjoy watching the movie with them.Deleted/Extended Scenes – (17:54 Total, 1080p) (AVAILABLE ON BOTH THE DVD AND BLU-RAY) – Nearly 18 minutes of deleted and extended scenes are included here for people who need to see even MORE of this material…My Scenes – The usual Blu-ray bookmarking feature is available here, allowing the viewer to set their own bookmarks throughout the film.DVD Copy – A second disc is included in the package, holding the standard DVD of the movie. It contains the movie presented in standard definition in an anamorphic 1.85:1 picture with Dolby Digital 5.1 sound in English (448 kbps). The deleted scenes are included, in standard definition, as is the commentary. There is also a Previews menu, offering trailers for multiple other DVDs, including the original A Haunted House, as well as Sabotage, Machete Kills, Hit & Run, Silent Hill: Revelation and Silent House.Digital Copy – Instructions are included in the packaging for obtaining a digital or Ultraviolet copy of the movie for your your laptop or portable device.Subtitles are available for the film in English, Spanish and French. A full chapter menu is available for the film.

If you haven’t guessed by now, A Haunted House 2 is not on my “Ten Best” list for the year. And frankly, I sincerely doubt it will be on many of yours either. For those who enjoy this kind of humor, I say please enjoy this as much as you can. For the rest of the readership, I can only warn you about these titles…