At 84, Ridley Scott remains as vital as ever.

Executive Producer on three films in 2021, producer on another (Death on the Nile), plus directing duties for The Last Duel and House of Gucci.

He has thirteen productions reportedly in various stages of development, one filming and one in post.

And I couldn't be happier.

I finally caught up with his House of Gucci, a tale of internal family maneuverings, and intrigue, which leaves one with the feeling that certain family members may have been in for the long con, and others hadn't a clue.

It's a beautifully shot film (Darius Wolski) and the resultant Blu-ray from MGM via Universal is a stunning reminder that films finished in 4k needn't be released as such to make a stunning impression, even in projection.

Viewing it 158 minutes, had me wondering what the intent was, as the tone seems to change from serious to camp and back again, especially with the totally unrecognizable Jared Leto as Paolo Gucci, one of the stranger black sheep of the eponymous family.

Italian accents move about a bit, but the actors are able to make their points, even with no actual Italians in the cast.

What is it about accents?

Americans seem to have problems with them in many situations, whilst the English seem to get it.

A bit disappointing that Universal didn't include the terrific trailer for the film. The film is being released on a classy 4K UHD disc in - where else? - Italy. I saw it theatrically projected in 2K from a DCP and it looked good. 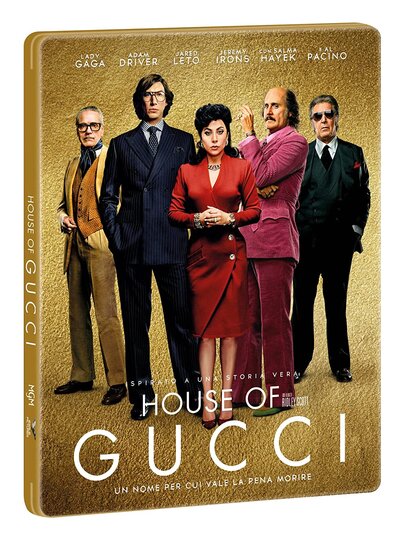