Olivia Wilde (she's been in Styles ...or vice versa )?

Not a good place.

Amazon confirmed my copy should be delivered today. I was pleasantly surprised to see the cost had dropped to $13.26/pc. plus tax when my card was charged. It's back up to $15.55/pc. now. Really looking forward to watching this especially if RAH says this could be the restoration of the year.
G

...and there have been some pretty amazing restorations this past year, from vintage '30s classics like DR. JEKYLL AND MR. HYDE to Cinerama epics like THE WONDERFUL WORLD OF THE BROTHERS GRIMM. It really is a golden era for movie collectors. 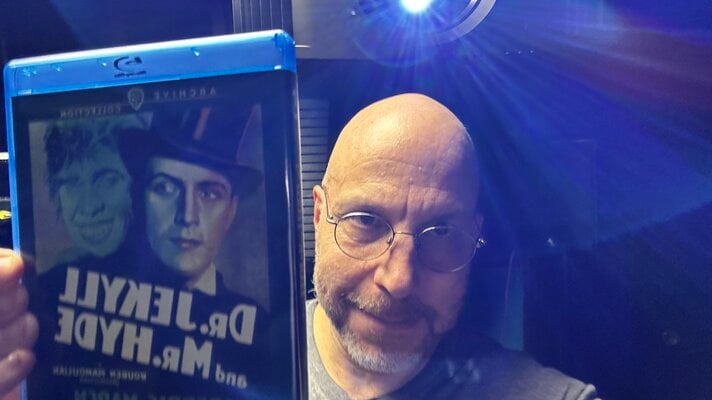 Just finished watching my copy. Also had the chance to watch the 1941 remake which is pretty much a mirror of the original.

Both films are equally as good. I suppose I was more taken aback by Spencer Tracy's performance only due to the fact I had never seen him play an evil character like that before and it was wholly against the persona I had known him to be. That being said, Frederic March did an amazing job -- especially with his agility in portraying Mr. Hyde.

Kind of odd that in the original, Dr. Jekyll is pronounced as "Jeekle." Not sure if it was pronounced the same in the remake.

Saw a flub in the final scene where Mr. Hyde is corned in the lab. As he climbs the bookcases you can see the hanging boom mike.

Finally, been reading all the prior comments about how everyone loves the fact that this is a "pre-code" film. Perhaps all the fuss concerns the woman who gets hurt, is brought to her bed by Dr. Jekyll, and then undresses in front of him. There's bare leg and a glimpse of a blanket-covered chest, but nothing that I thought was overly provocative. Didn't see anything here that I thought was too risque, but perhaps I am comparing it to today's standards. A good day for mail. What a double feature!

Ronald Epstein said:
Saw a flub in the final scene where Mr. Hyde is corned in the lab. As he climbs the bookcases you can see the hanging boom mike.
Click to expand...

eek… you just gave ammunition to the earlier argument that WAC was wrong to present this in Movietone aspect ratio.

Mark-P said:
eek… you just gave ammunition to the earlier argument that WAC was wrong to present this in Movietone aspect ratio.
Click to expand...

As I'm watching my share of classic horror movies this month, I noticed a couple of mistakes regarding boom mics being in certain scenes.

you can see that boom mike on the old dvd also. i just checked

A beautiful restoration. Such obvious care was taken by the film makers with every set-up, resulting in brilliant compositions with innovations that belie the year of its production. I found the use of diagonal slow-wipe split screens especially effective. Vignetting the point-of-view shots would be compromised had the image been cropped, and after viewing the entire disc I agree fully with the choice to use 1.19:1 for the image ratio.

The cheated mirror shot early on had me fooled for a second. Clever! By the time the third act was in full swing I was completely sucked in to the story and on the edge of my seat, despite having seen the film before. It is always such a treat when a transfer to home media is so well done that one forgets about the technical aspects of viewing the film and gets lost in the on screen action.

Mine is due tomorrow and I can't wait to see it! Thanks, Mark!

Will Krupp said:
Mine is due tomorrow and I can't wait to see it! Thanks, Mark!
Click to expand...

It's so good that it makes you realize that the "creeky" films of this area could be completely re-evaluated were they presented with such care. I watched my copy tonight and I was so wrapped up into the movie I completely didn’t see the boom. I had to play that scene again and there it was, just a small half round black thing for 3 seconds. On my first pass it looked as if it belonged with all the chains and other items you usually see hanging from from the ceiling in a turn of the century laboratory. Other than that ‘mistake’ the aspect of the film looked fine and composed right, to my uneducated eyes.

absolutely. i had to watch the top of the frame thru out the whole fight sequence to see anything, and that was on the old dvd..... will watch this blu tomorrow so i can turn up the speakers!!

Received my copy yesterday and couldn't resist taking a peak. Wow, the contrast and detail seem perfect - it's amazing to think that this is over 90 years old. Just beautiful, looking forward to watching it.

What a Beautiful Restoration ! Last year I bought the 1931 & 1941 Digital versions. Because I Love both of them. The 1941 MGM Bluray was released 5 months ago and looked Excellent. This 1931 New Bluray has all the spots, dirt, and lines all removed. So clean and sharp. Amazing for a 91 year old classic movie. Hats off to WBArchive and George F. for another Gorgeous Bluray release. Can't wait to see what we get in 2023 !

Received my copy yesterday. I noticed on the back of the case the running time says 96 minutes. I thought the original full-length time was 98 minutes, and the cut version was as little as 82 minutes. Can anyone substantiate that? It also on the back of the case says 17 minutes was restored. I haven't watched the blu yet, so I am wondering if more is on here compared to the DVD.
You must log in or register to reply here.

A few words about...™ From Here to Eternity - Columbia Classics Volume 3 -- in 4k UHD Blu-ray

Blu-ray Review A Few Words About A few words about…™ Goodbye, Mr. Chips – in Blu-ray
2