Worth said:
The box office failure of The Thing has been overstated - it made $20 million and cost around $15, so it probably broke even by the time video and television sales are factored in. I love the movie, but it was something that was never going to appeal to a mainstream audience. They tried it again with the prequel/remake and it still flopped.
Click to expand...

Oh, I'm sure "The Thing" has made money by now. Probably took a while, but given its enduring popularity on video, it's certainly turned a profit!
Reactions: Peter Keller

Tino said:
Regarding the Octupus deleted scene, it was seen in the Cyndi Lauper music video shown endlessly on MTV at the time which may have led some to believe it was in the film when it wasn’t.
Click to expand...

There's an octopus scene in the video but it's not the scene from the movie.

Instead, the octopus only attacks Lauper.

Of course, the movie mentions the octopus at the end - in a pretty bad continuity error - but the music video doesn't include the actual scene.

Colin Jacobson said:
There's an octopus scene in the video but it's not the scene from the movie.

Instead, the octopus only attacks Lauper.

Of course, the movie mentions the octopus at the end - in a pretty bad continuity error - but the music video doesn't include the actual scene.

Ok. It includes part of the deleted scene.

Tino said:
Ok. It includes part of the deleted scene.
Click to expand...

Yeah, the brief shot of the octopus itself is from the movie - though run backwards in the video, as the original shot showed the octopus as it backpedaled.

I'd be curious to know if the octopus appeared in the short version of the video. The full-length one is 2 parts and runs 12 minutes - I can't imagine that's the only one out there!

But I couldn't find a shorter one-part version on YT!

Hmm. Looks like the Octopus scene was included on the Disney channel showings of The Goonies after all.

The scene didn’t appear in either the theatrical version or when the film was released on VHS. However, a funny thing happened sometime in the 1990s. The Disney Channel aired The Goonies, and because the film had more than a few references that pushed the boundaries of acceptable children's entertainment as far as the Disney Channel went, they edited out those scenes. After the edits were made, though, they wanted to make up for the time being taken away so they added a couple of deleted scenes, including the octopus sequence (another notable deleted scene has the kids encounter Troy, a jerky local jock, at a convenience store. In the scene, the treasure map that the kids have gets burned a bit by Troy, which explains why the map is singed in later scenes in the film). So now suddenly you had a certain group of people who were talking about an octopus scene that no one else had ever seen. Many folks presumed that it was yet another phantom deleted scene, a fake memory based on Data's line later in the film. It happens a lot. However, this time it was for real. 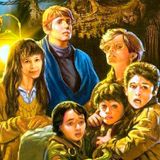 Movie Legends Revealed | Was There an Octopus in <i>The Goonies</i>?

This week, Brian Cronin wades into the movie legend that the 1985 comedy-adventure <i>The Goonies</i> originally included a scene in which the kids grapple with a giant octopus.