A Child Is Waiting Blu-ray Review

A socially conscious movie with a message that seems more in its producer Stanley Kramer’s wheelhouse than its director’s John Cassavetes, A Child Is Waiting is nevertheless an interesting look at educating the mentally disabled featuring top performances from its starry cast and an emotionally engaging story that holds one’s interest throughout. It’s a film that unquestionably deserves a critical reevaluation. 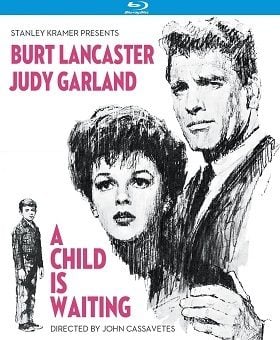 Searching to do something meaningful with her musical talent, Jean Hansen (Judy Garland) comes to the Crawthorne Training School in New Jersey with no experience as a teacher but with an eagerness to learn and to help the mentally challenged youngsters who make up the school’s population. Headmaster Dr. Matthew Clark (Burt Lancaster) decides to give her a chance, and she immediately connects with lonely, detached Reuben Widdicombe (Bruce Ritchey), a child whose parents (Steven Hill, Gena Rowlands) are too ashamed or too emotionally overwhelmed by his handicap to even come to see him on visitation days. Jean contacts the mother on the pretext of Reuben being ill, a gesture that almost gets her fired and definitely gets her assigned to a different section of the school avoiding daily contact with Reuben. It’s then that Reuben takes matters into his own hands and runs away.

One of Stanley Kramer’s favorite scenarists Abby Mann penned the script for the film, and it’s an always involving and occasionally heartbreaking look at these special children from an adult perspective. In both the visitation day sequence and, of course, the climactic school play finale where the children put on a pageant celebrating the Pilgrim and Native American Thanksgiving celebration, one can’t help but be emotionally moved by these children giving it their all and the various parents who sit there proudly watching their children achieve something of note (most of the children used in the film were from the Pacific State Hospital in Pomona). Of course, there’s also a relatively preachy scene where Lancaster’s Dr. Clark and his assistant Paul Stewart’s Goodman must state their case for more money for their facility to dubious politicians (among them John Marley) who want to strip state funding from the school to funnel it into programs for intellectually gifted students. There is a lengthy flashback sequence that shows us in shorthand the bumpy road to realization for the Widdicombes that their child was developmentally challenged adding great depth to the performances of Hill and Rowlands (though one still would have liked a stronger, more complexly written explanation for the mother’s aversion to seeing her son get help). Though the subject matter may not be the kind of thing that John Cassavetes showed much interest in, there are typical Cassavetes’ touches that prove it to be his work: an overuse of close-ups and a tendency to shoot from below upward perhaps attempting to psychologically instill in the viewer the child’s eye view of the world being portrayed.

Burt Lancaster gives a firm, solid, rather unyielding performance controlling emotions rather obviously even when one would expect him to burst with pride over the various children’s small but notable accomplishments. Judy Garland was enjoying a mini-renaissance of her movie career at this juncture of her life and performs with great dynamism and emotionality. Steven Hill is heartbreaking as the father whose disappointment that his son isn’t as other boys finally begins to see the light. Gena Rowlands as usual under her husband’s directorial hand gives a fine performance as the distraught mother. Bruce Ritchey was a professional actor playing a mentally challenged child, and he finds his place within the ensemble and offers a most believable performance (actor Billy Mumy is also visible in an early scene, another child performer playing handicapped). Paul Stewart has a couple of very riveting scenes as he faces off with Steven Hill knowing exactly how he feels to have challenged offspring (and a revelatory moment during the film’s climactic scene is quite if quietly moving). Gloria McGehee, Lawrence Tierney, John Marley, and Elizabeth Wilson all add luster to their small but important roles.

The film has been framed at 1.66:1 and is presented in 1080p resolution using the AVC codec. Sharpness is excellent throughout except when stars Judy Garland and Gene Rowlands are being given the close-up glamor treatment. The film seems in the earliest reel to be perhaps a touch too bright, but later on the grayscale seems more natural with crisp whites and black levels which vary from mediocre to quite striking (several scenes use shadows quite effectively). Contrast is consistently delivered. There are some dust specks which appear at intervals, but they aren’t notably distracting. The movie has been divided into 8 chapters.

The DTS-HD Master Audio 2.0 mono sound mix is quite typical of its era for a reasonably low budget feature. Dialogue has been well recorded and has been mixed judiciously with Ernest Gold’s sometimes obtrusive background score and various sound effects. In quieter scenes, there’s a bit of attenuated hiss present, but it’s not generally a problem.

Audio Commentary: film historians Tom Charity and Michael Van Den Bos offer a prickly commentary dissecting the film as a too-slick Cassavetes work rather than as the professional Hollywood film that it is. Still, background information they have to share is both interesting and informative.

A Child Is Waiting is an affecting and enjoyable drama focusing on an aspect of the educational system very different today but quite fascinating for its time period. The Blu-ray offers very good picture and sound that should greatly please fans of this overlooked classic.

Stanley Kramer and John Cassavetes?
Gena Rowlands and Burt Lancaster?
And Judy Garland, too?
What a solid, yet, unlikely blend.
But, thanks to Matt Hough's excellent review;
along with high scores on all fronts;
I'm gonna do a blind buy on this one, as Kino currently has it on sale for $9.99.
This one looks very intriguing; a boundary pusher in the context of its time;
and unflinchingly brave for all who were involved.