In Errol Morris’ 1991 film, A Brief History of Time, family members of noted theoretical physicist Stephen Hawking share small details of Stephen’s youth; the discovery of his immense intelligence, the onset of his debilitating disease, the boundless curiosity and willingness to share his ideas with the world. Friends and colleagues provide additional dimension to the life of Hawking in tandem with the discovery and evaluation of his theories and work. But the documentary is not merely a deconstruction of Hawking’s theories and triumphs. It is ultimately a sharing of his theories through 1991, and an examination of the man and the extraordinary circumstances that shaped, refined, and ultimately channeled the genius and powerful mind of the man.

And even these 23 years following its first premiere, A Brief History of Time remains absorbing. 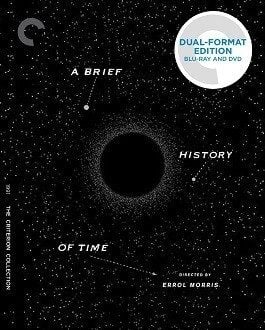 Errol Morris’ A Brief History of Time uses the title of theoretical physicist, cosmologist, and author Stephen Hawking’s bestselling book for his film about the pioneering scientist’s life and work. A documentary that rarely feels like a documentary, with Hawking’s incredible work sharing the screen with details about his life. But this isn’t an autobiography in the traditional sense. We hear from former colleagues, family members, and assistants who describe with fascination, reverence, humor, and fondness, the man whose theories of the universe have now gripped both the scientific community – and popular culture – for decades.

Stephen Hawking is a fascinating human being. By all accounts one of the smartest men alive (or to have loved), his theories on black holes, quantum physics and the origins of the universe are profound and tantalizing – even for the lay among us. His work to reconcile the accepted general theory of relativity – for which Einstein is perhaps best known – with the unpredictable nature of quantum mechanics (science on the nonoscopic scale) is laud worthy. There have been many great scientific minds in the years of Hawking’s career, and there have even been those that have achieved a high public profile and position to explain and explore great scientific theories to the public (the magnificent Neil DeGrasse Tyson, Brian Greene, Brian Cox, and Michio Kaku to name just a few). But none have influenced modern thinking and our understanding (or at least contemplation) of the universe quite as Hawking has.

Through a peculiar array of interview subjects – highly intelligent, in joy to share their slice of the story of Stephen’s life and discussion of his work – Morris constructs a marriage of Hawking growing up and falling ill to the incapacitating motor neuron disease (amyotrophic lateral sclerosis), that would eventually leave him unable to walk or talk, and of his contributions to the field of science with theories on the origin of the universe, the nature of Black Holes, the notorious ‘information paradox’. This choice to merge tales of the man as much as his work, could have divided the film, stealing an accomplishment of some serious examination of either his work or his life. In fairness, as the film begins to unwind from the opening, there is a distraction of interest between the story two paths as they run parallel. But this choice soon becomes clear as the right one for Morris to have made for his film. Hawking’s work is very much a part, and product, of his life and the events that have shaped that life. Without the debilitating disease (which continues to steal his ability to move and communicate as he once could), it is possible that his intelligence would not have found the right focus. It is possible that, had he not been required to think and conceptualize in images rather than mathematical problems on paper (which he could not tackle independently), he would not have uncovered the great theories and the ability to describe and address them.

Morris entwines his film with static portrait, and the occasional slow tracking shots of his interview subjects in fabricated sets at Elstree Studios in London. Even Hawking’s office at the Department of Applied Mathematics and Theoretical Physics was recreated on set, which gave director Morris and Director of Photography John Bailey, A.S.C greater control of lighting and the use of space. It never feels fabricated or forged, though is a curious choice to have made. As has been noted by others, it lends to the elevated reality feel. Composer Phillip Glass, with whom Morris worked before on his The Thin Blue Line (and since on The Fog of War), provides an masterful and minimal score, abounding with Glass’ hypnotic repetition simmering low enough not to interfere with the interview subjects but influential enough to set an almost dream-like feel upon the film.

A Brief History of Time succeeds in avoiding the brierpatch of the pitting science against theology. As with Hawking’s book, God is discussed but never discounted. There is respect afoot for all considerations and perspectives on the matter but what Hawking’s seeks is an answer to the most alluring, confounding, and defining questions that humanity can ask of itself and of the nature of the possibly infinite space out there. And surely that’s as unifying as anything in the world.

Criterion’s standard array of care and consideration have been applied. The image is superbly crisp, free of dust and debris. The lighting choices in the film illuminate the interview subjects in interesting ways, with superb contrast, and with excellent detail.

Director Morris, in one of the accompanying special features, describes his displeasure with the visual effects work originally produced for the film (and later replaced with hand drawn images that work very well). Several good visual effects shots remain in the film, however (courtesy of Rhythm and Hues), including a spinning men’s watch, that hold up nicely for a 23 year old, relatively low-budgeted film.

A Brief History of Time’s 5.1 DTS-HD Master Audio was “mastered at 24-bit from the original 4-track magnetic tracks using Pro Tools HD.” As a result, the track is warm, clear, and without defects or drops. Besides Phillip Glass’ score, the audio is not asked to produce great dynamism, not unexpected for a documentary film like this, and so its charge is to simply produce the cleanest audio with the clear presentation of dialogue as delivered by the interview subjects and by the device that produces Hawking’s own distinct, machine assisted voice. In that regard, I find no complaints.

New Interview with Errol Morris: Director Errol Morris is a curios personality. An energetic, lively fellow with a clear curiosity and the eye for how to expose that curiosity on film. In this brief interview, mixed with footage from his film, Morris recalls moments with Hawking and his personal fascination with the subject of his documentary.

Accompanying Booklet: Featuring an essay by critic David Sterritt, a chapter from Stephen Hawking’s 2013 memoir, My Brief History, and an excerpt from Hawking’s 1988 book, A Brief History of Time. An excellent read and appropriate taste for the works of Hawking.

How do we describe the nothingness that possibly existed before the moment of the big bang? As stated in the film, words do not exist to describe such a period. Is the Universe constant, was it born of a big bang. If there was a big bang, was there an accelerated early period before the universe cooled and it continues to expand today. Will the universe die? Will its expansion continue, with everything in it growing further and further apart, with the stars exploding and never seeding new galactic nurseries to replenish itself, until everything is without light, without heat and utterly dead?

These, and other, deeply profound astrophysical and scientific questions have led to discoveries and theories that have been pondered, debated, dismissed, reimagined, discussed, debated again and in many instances accepted as most likely, with new evidence gained through great minds and the powerful tools in play in science today (such as the Hubble and Kepler Telescopes, and the powerful facility at CERN). And in each case, considerable human ingenuity and scientific muster and excellence have been offered. Stephen Hawking hasn’t always been right in the theories he has proffered. But that is the nature of science. Hawking’s first wife once suggested that her role was to remind people that Hawking was not God. Hawking’s genius should never be considered infallible. No scientist worth their salt should be.

Director Errol Morris appears to understand Professor Stephen Hawking as a man and as a scientist. He does not present his subject as hero. He does not share the challenges of his physical weakness as a measure of triumph. He simply allows his work and those who know him the closest to share slices of who this man is and what he has accomplished. A Brief History of Time is a wonderful way of understanding a little better who Stephen Hawking was and is. And though he may just be a man, my goodness, what an extraordinary and important man he has become.

It's funny to me that i purchased from Ebay a laserdisc copy of the film 3 weeks before the Criterion announcement. Being a big fan of Hawking and the tv specials he has done i will buy this great documentary.

atcolomb said:
It's funny to me that i purchased from Ebay a laserdisc copy of the film 3 weeks before the Criterion announcement. Being a big fan of Hawking and the tv specials he has done i will buy this great documentary.
Click to expand...

You will be most pleased at how this film looks.

Hmmm... Definitely something to check out...