This must be Christopher Walker at his most mesmerising. You can't take your eyes off him. Abel Ferrara is an unpredictable director, who has had a very interesting independent film career. King Of New York is a gangster film, where you are just rooting for the bad guy, because he's Christopher Walken.

I'm pretty sure the board at Criterion are sitting up now. Arrow has released another cult film on 4K UHD, on another sensibly priced standard edition, with a superb transfer. King Of New York has never looked good on home video - until now. This is really beautiful. So much of the film takes place in the dark, or in poorly lit or very strongly saturated colour-lit sets, but there is very little crush or distortion when projected. There is a fine layer of film grain throughout. Colours are so much better resolved than on the previous blu-ray. There is no heavy-handed HDR applied. There are lots of ported-over extras from previous blu-rays and DVDs - so another kick in the face to all the studios releasing 4K discs with barely any supplements on them. It obviously can be done.

30 years is so long ago, I can't remember how King Of New York looked originally, when I saw it at the Prince Charles cinema in Leicester Square in London. But I doubt it was a print as sharp as this. In fact, the only thing that looks bad on this disc is the crappy, low resolution Arrow logo at the beginning - you would think they would upgrade that to something a little more 4K'ish?

I hope Arrow are going to start releasing a much larger portion of their 4K transfers on disc. They certainly know how to do it properly. I'm looking forward to comparing the forthcoming Arrow 4K UHD of Crash with the German Turbine Median 4K UHD, to see if they are identical, or if Arrow use their own bespoke encode. 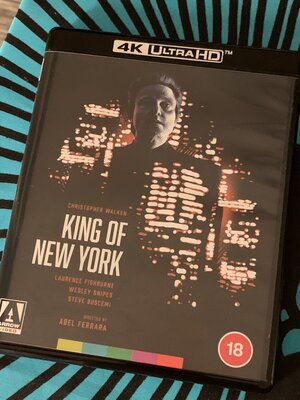 titch said:
This must be Christopher Walker at his most mesmerising.
Click to expand...

Would that Be Christopher Walken's identical cousin?

JohnRice said:
Would that Be Christopher Walken's identical cousin?
Click to expand...

He even dances a little!
You must log in or register to reply here.

UHD Review A Few Words About A few words about...™ -The Apartment -- in 4k UHD