JohnRice said:
I'm confused on the TCL 8 series. Best Buy says it's edge lit, which is a deal breaker for me. I thought it was mini LED...
Click to expand... TCL threw the kitchen sink at the 8-Series: Mini-LED, QLED, 4K and HDR, with a price tag to match. So how does it compare to the best sets on the market?

JohnRice said:
I'm confused on the TCL 8 series. Best Buy says it's edge lit, which is a deal breaker for me. I thought it was mini LED. Isn't that basically more and smaller dimming zones? There's so much electronic voodoo in marketing these days, you can't tell the real info from the garbage. I would have considered that model this past Spring when I got my Vizio P Series, but I don't know if it was available yet. FWIW, I'm quite happy with the P Series, especially the $900 I paid for the 65". You can sometimes see the dimming zones during moving credits on a black background, but otherwise it's been invisible. I would have liked the Roku TV schedule of the TCL, since I use OTA. That is a very nice feature with OTA.
Click to expand...

Worth linked to the review I’d have shared. The 8-series released late 2019 is TCL’s current flagship. Reviews put it near the top of LCD performance, image quality and smartTV features. (Interestingly, rtings.com ranks Hisense better for absolute performance).

the 2020 TCL 6 series added the mini LEDs. But they have a lower-count array than the 8 series. Affordable pricing and a bright, punchy image make the 6-Series the TV to beat.

DaveF said:
Worth linked to the review I’d have shared. The 8-series released late 2019 is TCL’s current flagship. Reviews put it near the top of LCD performance, image quality and smartTV features. (Interestingly, rtings.com ranks Hisense better for absolute performance).
Click to expand...

They also rate the 75" Vizio PX Series slightly higher overall if I'm remembering correctly. 8.0 for the TCL and 8.1 for the Vizio. I think it might come down to other aspects, such as the TCL having Roku, which will be a plus for some and not for others.

Incidentally, those wide feet so many (except the TCL 8) have don't work on my stands, so I spent another $50 for a heavy duty VESA stand.

I’ve already got a beefy wall mount from 2009 that pretty sure will work with a 65” set, so I’ve ignored all the feet designs

Best prices I've seen are:
(I mis-remembered about the sale price on the Sony A8H and incorrectly said it dropped to $1500.)

I tend to agree with Jackie. You might take a closer look at the TCL 6 series. I have never once been disappointed with the Vizio M series I got for the living room early this year. It left money for much better uses. I use that TV much the way you use the one you’re replacing now. I don’t know why you are closed to Vizio, but the TCL 6 series sounds like a good alternative.

I don’t find the viewing angle on my TCL 6 to be nearly as narrow as the literature might claim. It’s certainly leaps and bounds beyond what it was on LCD and LED sets from a decade ago. Wall mounts are also better/cheaper/more flexible now than then, so my thinking here is that if the off-angle viewing from the other room is so bad (which I don’t think it would be), adding a new wall mount that pulls out and swivels a bit will still be significantly more cost effective than buying a TV that cost two or three times what the next model up would be.

Is there a Best Buy or similar store around that’ll give you a 30 day return policy on a TCL 6 or Vizio M? Maybe try it out and see if it’ll do what you need? I’d give the TCL the edge over the Vizio for the built in Roku, fwiw.

It’s just that for the usage you’ve described, I don’t think you need a TV that’s well over $1000. There’s certainly nothing wrong with the sets you’ve mentioned. But like John said, you can get a really great set for $680ish and put that extra money into your next round of iPod/iPad updates.

I had a plasma before the TCL. Not a Kuro, but the LG model I had was well reviewed and at the time was the best set I had ever owned. The TCL I replaced it with was half the price and superior in every way except the lack of 3D capability, which is a non-issue for almost everyone.

Dave, maybe you don’t realize that a mid level LED model now will blow away the very best plasma ever made. Plus, what you are paying for in the high end models is excellent HDR capability. If you don’t watch HDR material, it’s completely wasted money.

Because I’m an irrational HTF enthusiast who is prone to over buying. Why, who’s asking?

One other point I forgot to make: a 2020 model anything will in most cases be better than a 2009 anything - the built in image processing and display panels have just gotten that much better over the decade. But a trade-off has been that stuff just isn’t built to last anymore. Whether it’s a $400 budget set or a $3000 high end OLED, you’re not going to get 10 or 20 years out of a television by default anymore. So my advice is also to budget this as if you’re going to be replacing it in five years, not as if it’ll last a decade or two. If it does last that long, fantastic, but they’re not being made for the long haul anymore so I don’t think it makes sense to spend as much as if they were.

I could probably walk back if I got to a retail store to browse. I’m so used to 0 to 90-degree viewing angles, even for casual stuff, I’m wary of giving that up. But it’s hard to estimate that without seeing it in person. Otherwise, I’d buy the TCL 8-series to have a “high end” set for a relative bargain.

What you get these days from angles is not loss of image, but some color shift and maybe loss of contrast. Of course, only OLED will match plasma in that regard. Just know it has improves immensely.

Look at the 6s too. I’m not just saying that because I want another soul to have what I have. I’m saying it because I also expected to have to spend $1500 to get a TV I could be happy with and was just blown away by what the series 6 offered, independent of price. I believe @Neil Middlemiss is also using a series 6 and offered me a great and honest assessment that was the final thing I needed to feel good about getting it.

When that Game of Thrones episode aired that everyone complained was impossible to see on their sets, my wife had no idea what anyone was talking about because it looked just fine on the TCL.

I may have to go to BestBuy and browse. I’ve eliminated ”leisure” shopping because #2020, but I’ll have to consider in person browsing.

Don't waste time browsing BB if you want to see a TCL or Vizio set in action. Last time I was there they just had Samsung's and Sony and LG on display. Plus they have a horrible set up these days. Many sets are mounted way too high up on their walls to get a real world test. Most "budget" TV's are just stacked on the floors.

Maybe with BF near they changed things, but doubtful.

I was thinking more about OLED again, because I want a new toy. But I've learned burn-in is a thing. Sounds like OLED is more susceptible than Plasma ever was. And this is the living room TV all day every day during the daytime. Evening use is varied content with lots of streaming. But it would have HGTV or Food Network station logo in the corner for as much as 10 hours a day, seven days a week.

Based on this, I could see burn-in from the logos in a year or two. There are concerns about OLED long-term performance due to the possibility of burn-in. We bought 6 LG OLED C7 to play real, non-altered content. It should give you a better idea of what to expect depending on what you watch on your TV. QLED is capable of higher light levels than OLED, if that matters. 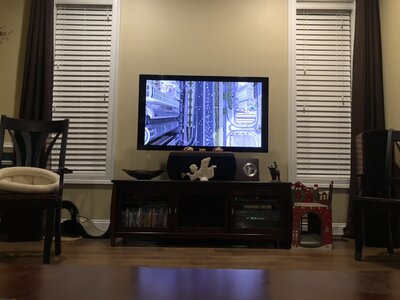 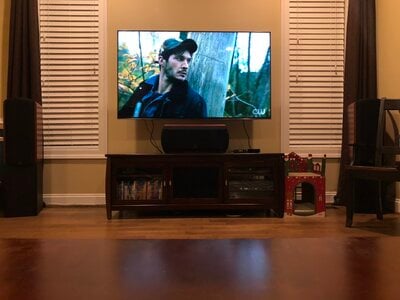 Bought it on last week‘s sale, arrived today. Fortunately, my decade old wall mount bought for my 50” tv works. It had the flexibility to put the new TV above the center speaker. (I was worried the tv wouldn’t clear the speaker. Ironically, I can’t get it as low as I want. I’d rather it be two inches lower, but the mount location and tv vesa points actually conspire against me in that direction. But, it’s not so much to make it worthwhile to rework the on-wall mounting of the mount itself.)

I’m still running HD for now. I need to buy an eARC 4K receiver. But the one I want is in low supply and not on sale. So it may wait a bit. 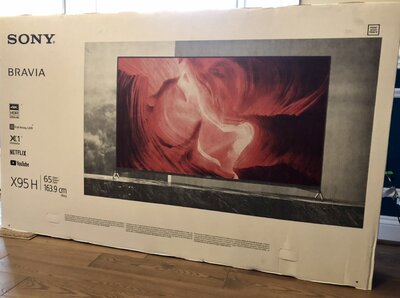