There are quite a few surprises piled into the screenplay for Timothy Woodward Jr.’s 4Got10 (“Forgotten” for those who might not be able to figure out the weird title), and were they strung together with a little more style and with better performances from some of the major cast members, this little Robert Rodriguez wannabe might have turned out to be an intriguing mystery sleeper. Alas, the negatives and the positives pretty much balance out in this low budget, fairly forgettable production. 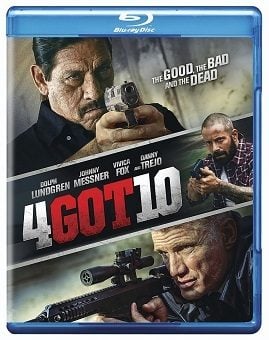 Coming to in a lot with more than a half dozen dead bodies surrounding him and with a fresh bullet wound in his side, a man who later learns his name is Brian Barns (Johnny Messner) can’t remember who he is or how he came to be in a lot with all of these dead people and a van with $3 million and bricks of cocaine worth at least that much more. An arriving lawman Sheriff Olson (Michael Paré) with his deputy likewise eyes the money and with dreams of retirement, kills the deputy before he himself is shot by Brian who then whisks away with the van. It turns out the money and drugs belong to local drug kingpin Mateo Perez (Danny Trejo) who naturally wants them back but is more interested in learning who killed the deputy who happens to be his son. So with the wounded but not dead sheriff and a drug lord on his tail as well as DEA agent Bob Rooker (Dolph Lundgren) and his team, Brian needs to come up with some answers if he wants to stay alive.

Sean Ryan has written a script which uses something of a Memento approach to revealing its clues: i.e. Brian’s memories return in small pieces of information which as they collect surprisingly reveal to the viewer that much of what we had seen earlier was not at all what it appeared. The film even at only eighty-four minutes is still filled with the shootouts and double crosses one expects in this kind of bloody vengeance scenario set in the southwest and loaded with people up to no good, but director Timothy Woodward Jr. still finds time to fall back on a couple of hoary motifs for his storytelling that don’t do his film any favors: an overabundance of slow motion used to show bullets entering bodies during the shootouts (a climactic face-off between Perez, who finally learns it was the sheriff who killed his boy and not Brian, and Olson is one of the most ludicrously filmed death scenes in screen history as each man alternately pumps bullet after bullet into his adversary while both are on their knees only a few feet from one another) and a couple of ill-advised sex scenes which seem like filler and in the kind of time sensitive story that’s being told appear ridiculous in context.

Johnny Messner and Michael Paré are both very good in their primary roles of “hero” and “villain” though in Messner’s case, it takes the entire movie to find out he’s meant to be the hero. Dolph Lundgren, on the other hand, lumbers through the film as if he’s walking underwater and speaks just as slowly making his scenes rather cumbersome in a thriller meant to be fast-paced. Danny Trejo does his usual solid job as the drug lord, and John Laughlin ups the creep factor considerably as his lawyer who’s also a woman abuser and all-around jerk. Natassia Malthe as Christine, a woman tied up emotionally with both Laughlin and Messner’s characters, has an uncertain accent that seems to come and go and has both good and bad moments of performance, but she’s superb in comparison to Vivica A. Fox’s poorly performed DEA Agent Imani Cole. The actress’s line readings come off as overly rehearsed and unnatural.

For its brief theatrical run and now on home video, the film is framed at 2.35:1 and is presented in 1080p using the AVC codec. Apart from some mottled darker scenes where black levels crush shadow detail, the visuals here are quite excellent with very good sharpness and color which appears solid and natural. Contrast has been consistently applied to the picture. The film has been divided into 8 chapters.

The DTS-HD Master Audio 5.1 sound mix uses Sid De La Cruz’s twangy background score to traverse the widest reaches of its soundstage. Dialogue has been well recorded and has been placed in the center channel. There are some split effects during shootouts, but the film’s low budget makes itself felt here as the channels don’t get the kind of explosive use that distinguishes the best action-oriented pictures from their less sophisticated siblings.

Behind the Scenes (18:03, HD): director Timothy Woodward Jr. discusses the basic plot of the movie and then spends a generous amount of time praising all of the stars in his cast. There is ample behind-the-scenes footage of the staging and filming taking place, and stars Dolph Lundgren and Danny Trejo offer a few soundbites of their own.

Deleted Scenes (2:53, HD): six brief scenes including an alternate ending may be watched separately or in montage.

The low budget 4Got10 offers a fair amount of entertainment bang for the buck, but there was potential here for a truly twisty, exhilarating mystery had the writing and direction not fallen back on standard tropes of the genre to fill out its running time.