The scandal and infamous notoriety surrounding the personal and professional collaboration between international film star Ingrid Bergman and Italian neorealist maestro Roberto Rossellini belong in a time and place well more than half a century removed from the present day. With all of that gossip and outrage much beside the point and faded into the mists of time, what we’re left with are several films, three of which make up this latest box set from Criterion: 3 Films by Roberto Rossellini Starring Ingrid Bergman, none of which were particularly successful at the box-office in their day but all of which make up a fascinating chapter in the careers of both of these revered filmmakers. 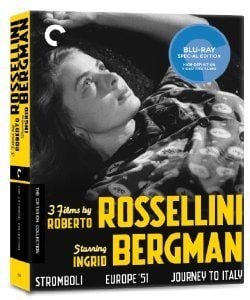 individual book-like cases for each film inside a slipcase

Stromboli – 3/5Both the English language and Italian language versions of the film are framed at their original 1.37:1 aspect ratio and are presented in 1080p using the AVC codec. Sharpness comes and goes in the film cobbled together as it has been from numerous sources over the years. The grayscale is likewise variable with blacks that are only average and whites that are sometimes blown out due to erratic contrast. There is banding to be seen, an occasional example of false contouring, a noticeable hair, and some scratches that haven’t been removed. The subtitles are in white and are always easy to read. The film has been divided into 15 chapters.Europe ’51 – 4/5Though the 1.37:1 (AVC codec) transfer has a fair share of light damage and a troublesome black scratch that comes and goes, sharpness is improved from Stromboli (though long shots continue to be problematic on occasion), and the grayscale is also more solid: fewer blooming whites and a slightly deeper black level and more consistent and pleasing contrast. The movie has been divided into 20 chapters, and the white subtitles when used are easy to read.Journey to Italy – 4.5/5This film has by far the most pleasing and commendable transfer (1:37 aspect ratio using the AVC codec). Apart from some slight line twitter on occasion, the image is solid: sharp, clear, and with superb contrast that’s never too hot. That makes for an exceptionally pleasing grayscale with clear whites and fine black levels (if not exceptionally deep). The film has been divided into 15 chapters.

Stromboli – 3/5The PCM 1.0 (1.1 Mbps) sound mixes on both versions of the movie have been cleaned up as best they can though there is still some low level hiss to be heard on occasion and some flutter, too. The dialogue was post synched, so there is that flat, dry element to the sound that offers rather tinny fidelity even during the volcano and tuna catching sequences, and sometimes the dialogue in English isn’t always discernible with volume levels varying sometimes during dialogue scenes.Europe ’51 – 3.5/5The PCM 1.0 (1.1 Mbps) sound mix has had a more successful clean-up job than Stromboli as there is little to no hiss present nor any other age-related audio anomalies. Much of the movie was post synched but not all of it, and the scenes with Bergman and Alexander Knox speaking English sound so much more natural than scenes they play with Italian actors where everything is dubbed in a tinnier, more lifeless manner that drains spark out of the scenes.Journey to Italy – 3.5/5The PCM 1.0 (1.1 Mbps) sound mix is post synched even with the two English speaking leading players, and that flat, arid quality to the dialogue is most prominent. The music which mixes background score and quite a few southern Italian folk songs has better than average fidelity, and the restoration has done a fine job eliminating hiss, pops, crackle, and flutter from the original sound elements.

3 Films by Roberto Rossellini Starring Ingrid Bergman brings these three now widely heralded films to a wider audience in high definition editions that are greatly improved from prints which have been circulating for years (one look at the clips from the films in the various documentaries in this set proves their tremendous improvement through restoration). Fans of the star and the director will be eager to sample these interesting attempts to mix neorealist tendencies with more commercial filmmaking directives.

My favorite is Journey To Italy and will get the box set. Was going to put away my Korean made dvd but it has the english voices of George Sanders and Ingrid Bergman and not dubbed in to Italian. I find it alittle hard to get used to Sanders speaking Italian in the movie.

atcolomb said:
My favorite is Journey To Italy and will get the box set. Was going to put away my Korean made dvd but it has the english voices of George Sanders and Ingrid Bergman and not dubbed in to Italian. I find it alittle hard to get used to Sanders speaking Italian in the movie.
Click to expand...

The one in the box is the English language version, so you'll hear both Bergman and Sanders speaking their own lines.

All three movies are brilliant and hugely influential on the landscape of subsequent European films. They were mangled upon release in the USA and misunderstood, even to this day. Bergman is real, raw, a revelation.
Stromboli, Terra di Dio, and Europa '51 are deeply religious films. I am not a believer, but I felt Rossellini's deep faith come through, just as it did in his short film Il miracolo, with Anna Magnani.
I first saw Europa '51 when it premiered at the New York Film Festival, and at the end of the movie I remained glued to my seat, awash in tears, the final shot of Bergman's face etched indelibly in my memory. I will always thank Rossellini and Bergman for it.

Matt Hough said:
The one in the box is the English language version, so you'll hear both Bergman and Sanders speaking their own lines.
Click to expand...

Thanks for the info. TCM did broadcast the movie a few months ago with Bergman and Sanders dubbed in Italian so i thought that was going to be the version on the box set.
You must log in or register to reply here.