3-D Rarities is the demonstration disc that belongs in the collection of every aficionado of 3-D films. The 3-D effects in this collection put most modern efforts at 3-D to shame. Bob Furmanek, Greg Kintz, Jack Theakston, and the late Dan Symmes have restored these short films to the point that they almost certainly look better than they ever have in the past. 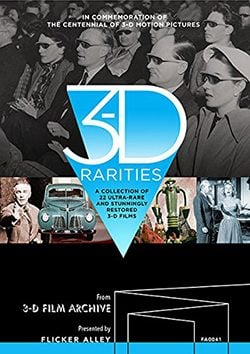 100 years after the first documented exhibition of a 3-D film(on June 10, 1915), the 3-D Film Archive has released 3-D Rarities in conjunction with Flicker Alley. Although the film footage in this collection was produced between 1922 and 1953, the 3-D effects in these short films surpass most modern 3-D efforts. Today's creators of 3-D productions would do well to study the camera angles, composition, and staging demonstrated in these short films. Foreground, background, and layers in between are used to excellent effect, in contrast with lesser 3-D efforts that often appear flat by comparison.

3-D Rarities has an eclectic collection of films divided into 2 main categories: 1) The Dawn of Stereoscopic Cinematography and 2) Hollywood Enters the Third Dimension. There is footage of Washington, D.C. in the 1920s, World's Fair footage from 1940, the Marciano/Walcott championship bout from 1953, an atomic bomb test from the 1950s, standup and burlesque comedy, stop-motion animation, film cel animation, Hollywood film trailers, and even Casper the Friendly Ghost. This film collection represents a treasure trove of fascinating films, all the more remarkable for each one being in 3-D. (These film shorts may also be viewed in 2-D on any Blu-ray player.)

The films are as follows:

The Dawn of Stereoscopic Cinematography

Kelley's Plasticon Pictures(1922/1923)(7:41): This footage includes Through The Trees - Washington, D.C. which features footage of Washington, Arlington Cemetery, and West Point in the 1920s and has what may be the only existing film footage of Civil War veterans attending a memorial. The Through The Trees footage particularly lives up to its name as the shots are excellently composed to create the illusion that "you are there".

William T. Crespinel/Jaco Leventhal tests(1924-1927)(5:44): Crespinel photographed most of this footage which includes some great money shots like a man pointing a gun, a witch throwing acid, and a Nathan's hot dog on the end of a long stick.

John Norling/Jacob Leventhal tests(1935)(3:25): This footage includes Riverside Drive as it enters the George Washington Bridge, the Thunderbolt rollercoaster on Coney Island, and baseball players pitching and sliding towards the camera.

Thrills For You(1940)(8:26): This film was produced by the Pennsylvania Railroad and promotes the luxury features of its train cars for travelers in the 1940s.

New Dimensions(1940)(9:08): This film produced for the New York World's Fair by Chrysler Motors in 1940 is a Technicolor remake of Chrysler's 1939 black and white 3-D film In Tune With Tomorrow. The film shows the assembly of a luxury Plymouth sedan with stop-motion animation.

Now Is The Time(1951)(3:13): Animator Norman McLaren produced this film for the National Film Board of Canada.

Around Is Around(1951)(7:28): This animated short by Norman McLaren demonstrates some of the best spherical use of 3-D that may ever be seen.

O Canada(1952)(1:32): A National Film Board of Canada presentation by Norman McLaren with the national anthem played over animation representing the character of Canada from the Atlantic to the Pacific Ocean.

Bolex Stereo(1952)(10:32): This fascinating promotional film was produced by Bolex Cameras to promote its 16mm 3-D film camera. The film is a travelogue that includes footage from Hawaii.

Rocky Marciano vs. Jersey Joe Walcott(1953)(16:36): This is the first and only 3-D newsreel and feature the Heavyweight Championship match at Chicago Stadium from May 15, 1953.

Hannah Lee trailer(1953)(2:07): Approximately 18 seconds of this trailer is presented flat due to some stereo footage remaining lost.

Stardust In Your Eyes(1953)(6:10): Standup comic Slick Slavin aka Trustin Howard presents his impressions of various Hollywood personalities in this short film produced by Phil Tucker which preceded Robot Monster in its original theatrical release.

The Maze trailer(1953)(2:16): Richard Carlson introduces The Maze to theatrical patrons in this trailer shot by director William Cameron Menzies.

Doom Town(1953)(15:25): This short featuring an atomic bomb test in Nevada features some brief footage of Las Vegas. This short premiered in Los Angeles on July 2, 1953, with College Capers and The Maze before disappearing from distribution for decades before recovery of the original negatives by Bob Furmanek in the 1980s.

The Adventures of Sam Space(1960)(9:13): This short was produced originally in 1953 in the style of George Pal's Puppetoons by Paul G. Sprunck, a writer/director who had worked on the Puppetoons.

Boo Moon(1953)(7:33): This Casper The Friendly Ghost short is presented in 3-D in its original theatrical widescreen aspect ratio. This short has been shown for years on television in a pan and scan version with the left and right sides chopped off the screen images. The 3-D imagery, and restoration, are excellent.

The shorts are presented in 1080p with the AVC codec. The video presentation is excellent. The black and white footage, particularly in the 1920s, has very good gray scale with solid blacks and fine contrast. As we move into the Technicolor era in the 1940s, colors are rich and vivid with far less in the way of visible print damage than we have any right to expect. The occasional scratch or fiber visible in the aperture is the exception rather than the norm. The 1920s footage looks terrific with the only major flaw being some fading noticeable between the left and right views. The Casper short, Boo Moon, with its vibrant colors and pristine images, actually looks better than many HD transfers of animated shorts being released from other larger studios. The video presentation is not perfect, but very nearly so.

Screen aspect ratios are variable between shorts. The narrowest by far is the Bolex Stereo short which appears like an upright rectangle with an aspect ratio that I would calculate to be approximately 1.16:1. The Bolex had the stereo images side by side on 16mm film, so the 1.37:1 aspect ratio of the film strip was halved. Most of the shorts appear at 1.37:1 until 1953, at which point the last few shorts appear in a 1.66:1 aspect ratio.

Many of these shorts use pop-out to great effect. Surprisingly, some of the best pop-out images come from the 1920s, with a Nathan's hot dog being extended towards the audience on a stick makes it appear mere inches from the viewer's nose. The 1950s shorts also have some great money shots.

Ghosting was minimal to non-existent when viewed on my active display. I see more cross-talk visible on modern, digital releases than I could see in this presentation. This is reference quality 3-D presentation.

Audio is presented in DTS-HD MA 5.1. Audio is really excellent for what it is, since directional audio between the 1920s and 1953 was fairly non-existent in film. The audio has greater dynamic range than we have any right to expect, and there is none of the hiss or popping that is often perceptible in releases from this era. Dialogue and music are blended consistently well for a fine audio mix.

The Bellboy and the Playgirls(2:04): Francis Ford Coppola wrote and produced approximately 18 minutes of footage for this film featuring June Wilkinson and Don Kenney, and a clip of that footage in 3-D is included here.

The Hunchback of Notre Dame(1923): Producer Carl Laemmle used Camerascope viewers to create 3-D stills to promote the feature starring Lon Chaney, and these stills are presented here in 3-D.

3-D Comic Books: This demonstrates how the 3-D Film Archive can transfer anaglyphic 3-D comic books from the 1950s (and since) into HD quality 3-D.

3-D Rarities is highly recommended for anyone with 3-D equipment. (This release is even recommended for those without 3-D equipment, as these shorts would be worthwhile viewing even in 2-D, and the disc is compatible with standard Blu-ray players.) This is reference quality 3-D on a disc that you are like to watch many times. It is that good. The video and audio presentation are consistently excellent on these short films.

There are many 3-D feature films, and short films, from the 1950s owned by the major film studios that still have not been released, and may never be released. I have it on good authority that these unreleased 3-D features and shorts have 3-D imagery as good as anything on this disc. Why has Lumber Jack Rabbit, featuring Bugs Bunny, never been released as a special feature with House of Wax or Dial M For Murder? Popeye and Woody Woodpecker have 3-D shorts that still have not been released on 3-D Blu-ray. It is astonishing that the major film studios that own these films have been so stingy with their releases.

Bob Furmanek, Greg Kintz, Jack Theakston, and everyone else responsible for this release deserve credit for rediscovering these treasures for the masses. I hope that 3-D Rarities enjoys the success that it deserves, and that the film studios that are sitting on top of unreleased 3-D films from the Golden Age take notice of this release and let those films out of their vaults.

This release of 3-D Rarities is the tip of the iceberg for short films from the Golden Age of 3-D. There is a wealth of other 3-D shorts, as excellent as these films, that the film studios can release, or license to companies like the 3-D Film Archive.

I hope that we see the release of Volume 2 of 3-D Rarities some day in the near future. 3-D Rarities (Volume 1) comes highly recommended.


Thanks so much for your review and I am so ecstatic to read that you concur with the views of those of us that have already seen this disc. It is the best 3D money can buy right now.

Thank you VERY much, Tim. I'm so happy that you enjoyed it!

By the way, this page on our website will give you an idea of just how much incredible Golden Age 3-D material is sitting in the vaults: http://www.3dfilmarchive.com/golden-age-3-d

Thanks for the review Tim, although I didn't need it. I pre-ordered it from Flicker Alley months ago and am waiting by the mailbox, thanks to Bob's insightfulness!
D

Has anyone received their copy yet? I pre-ordered months ago, and on the Flicker Alley website on release day, my order says "processing," not even "shipped."

They're a small office and there were a LOT of pre-orders.


June 16 is the release date and pre-orders began shipping on Monday. You should have it very soon!

I send this message from Spain. I received it on Tuesday 24.

I know I've mentioned this before but it's worth repeating. If you could please take a moment and leave us a review/rating on Amazon, that would be terrific. (Even if you purchased elsewhere, you can still post a review.) Every little bit helps and people do make purchase decisions based on those customer reviews.

I bought the movie through Flicker Alley but I just made my modest review with the title 3-D RARITIES OR 100 YEARS OF TRYING TO BREAK THE FRAMES. I hope you liked it.
E

I'm so happy to see the Casper short, not only in its original 3-D, but from a Technicolor print with it's original title cards.

And they are well deserved. Congrats to all!

Twas my first vintage content 3D Blu-Ray purchase and 22 restored movies worth every penny. Best things on it for me were the 1952 Bolex home movie 3D demo the equipment I used to have back in the day used with Bolex 16mm cine camera filming the family, also the 3D Coppola footage very interesting archive stuff.
You must log in or register to reply here.

Wednesday at 2:33 AM
Ronald Epstein