Three Hangover films have been two too many, and now a junior edition of the raunch-fest comedy has joined the fray with Jon Lucas and Scott Moore’s 21 & Over. A bromantic farce featuring three singularly unlikable dudes (well, two-and-a-half) in a nightmare evening of debauchery and adolescent hijinks, 21 & Over will mostly be a movie for teens and their maturity-starved older bros who find all night partying and indifference to the consequences of their foolishness on others to be a statement of their being true to what’s really important in life. 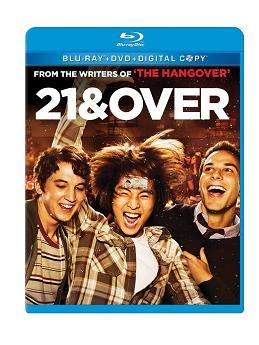 On the night before his important interview for entrance into the medical school of his father’s (François Chau) choosing, newly-turned twenty-one Jeff Chang (Justin Chon) is taken legally into his first bar by former high school friends the studious-minded Casey (Skylar Astin) and the irresponsibly wild-and-crazy Miller (Miles Teller) where he proceeds to get plastered and then falls unconscious. His two buddies want to take him home but have no idea of his address which leads into an all-night excursion about his college town trying to find someone who knows where Chang lives.The references to The Hangover are justified since writer-directors Jon Lucas and Scott Moore also wrote that international smash hit farce. Here, they’re recycling the outright lunacy that made that film so successful along with the anything goes attitude in terms of nudity, raunchiness, and bigotry. Miller’s nonstop talking is filled with non politically correct observations on just about every conceivable minority, and all races and religions are targets for his stupidity, but he’s such a chowderhead that he’s allowed to babble on with no repercussions. This is one of those movies that casts the evil eye and a wicked tongue on anyone in college who has serious aspirations toward a mainstream career: they’re thought to be the essence of nerdy, sell out squareness and to be avoided almost as if they were plague carriers. The script also doesn’t paint a very rosy picture of a generation of college seniors who are completely weak-willed when their friends’ attitudes clash with their own ideals and who don’t seem to be into anything except extreme partying, whoring, and mean-spirited practical jokes. The script features one college character with a goal and some objectives who doesn’t flee from her life’s aims: Nicole (Sarah Wright), and while she does her fair share of partying, too, she also seems grounded and in touch with her own sense of worth (though what she sees in the weak Casey is unclear; it’s one of an unending number of plot manipulations that are as far from the real world as Never Land). But despite all of the evening’s hijinks: the puking (in slow motion yet), the B&E into a sorority house, the multiple drinking levels of the Tower of Power (these are college seniors who have never heard of death from alcohol poisoning), the disruption of a pep rally (in the midnight hours? College has certainly changed), the dropping of Chang twice from an upper story onto a hard surface (without injury, of course), and a nude stroll around campus (with their privates safely encased in socks), the movie is more tiresome than it is titillating.One can’t imagine Casey and Miller ever having been friends in high school since as college students they are so very different, so Skylar Astin’s (who tries his best to maintain some dignity throughout) and Miles Teller’s (who’s no-hold-barred throughout) performances seem artificial from the get-go and only become more so the longer the movie runs. Justin Chon’s Jeff Chang is even worse (not his fault since he’s clearly acting what’s in the script) since the character goes from hard partier to comatose and then wildly insane before coming back to normal with no sign of a hangover (oh, that word again) in sight. Sarah Wright begins as a bit of a nasally Valley Girl before morphing into someone more real and true later, and she’s clearly meant to be the most appealing character in the story and an instant match for Casey who, of course, spends the entire movie pining for her since she’s already taken by aggressively macho cheerleader Randy (Jonathan Keltz) who spends most of the movie on a murderous rampage that gets stopped most appealingly by François Chau’s stereotypical Dr. Chang near the film’s end.

The film’s 2.40:1 theatrical aspect ratio is presented in a 1080p transfer using the AVC codec. Sharpness is mostly excellent with only an occasional shot that seems inconsistently presented. Color is richly saturated and always under control while flesh tones are also deeply tan but more or less realistic. Black levels aren’t the deepest possible but are certainly more than acceptable (important since most of the film takes place at night). The film has been divided into 24 chapters.

The DTS-HD Master Audio 5.1 sound mix does not use its rear channels for split effects, and for a film that is trading on its explosive party atmosphere, that’s a serious lost opportunity. Instead, the rear channels (along with the fronts) are the receptacles for the almost constant stream of rap and rock music which punctuates the soundtrack. Dialogue is always discernible and has been placed in the center channel.

Levels of Intoxication (3:48, HD): a brief EPK featurette featuring directors Jon Lucas and Scott Moore along with the major actors in the piece describing the ten levels shown in the film of Jeff’s drunkenness.Tower of Power (3:08, HD): the cast narrates the eight levels of drinking that Miller and Casey must conquer to reach the top floor of the party house during the film.Gag Reel (2:24, HD)Theatrical Trailer (1:43, HD)DVD and Digital Copy CombinationPromo Trailers (HD): Movie 43, A Good Day to Die Hard, The Internship, Archer: Season 3.

A frat boy comedy that gives frat boys a bad name, 21 & Over is a manic but mindless farce that wastes some good actors on a Hangover retread for young adults that is simply too predictable and unmemorable for recommendation.