2 Guns unloads onto Blu-ray with a solid edition that presents this surprisingly entertaining action movie with great high definition picture and sound, along with some good extra features. The movie is a deliberate and effective throwback to the buddy action movie formula, showing a fun and easy chemistry between lead actors Denzel Washington and Mark Wahlberg. And among the bank robberies, chases, explosions and shootouts, the movie provides a lot of escapist fun for the audience – at least until the whole story collapses under its own weight around 2/3 of the way through. If anything, this should be a fun rental for Wahlberg and Washington fans, as well as viewers looking for a good action movie. In spite of its issues, the movie’s good nature is enough for me to Recommend it at least for rental. 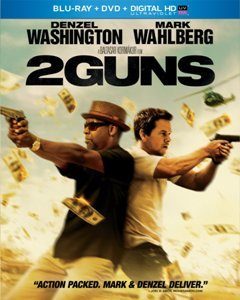 2 Guns is presented in a 2.40:1 1080p AVC encode (@ an average 34 mbps) that looks great. At least some of the movie was actually shot on film, and nearly the whole enterprise has a pleasing, non-digital look to it. There’s a wide array of landscapes, textures and flesh tones to capture here, and the transfer gets them all. Details like the fabric and patterns of the terrible shirts Washinton wears here really pop off the screen, as they were clearly meant to do. The big climax is the one place where the digital effects do seem to pop a little – just because they were clearly forced into CGI and it’s not hard to tell which shots have a lot of it. That’s not necessarily a problem with the transfer, but it’s one of the things that can knock the viewer out of the movie.

2 Guns gets an English DTS-HD MA 5.1 mix (@ an average 3.6 mbps, up to 4.3 mbps for the louder sequences), which fills the home theater in an effective way. The subwoofer gets a workout here, as one might expect with all the explosions and gunplay. The surrounds get attention not only for music but for plenty of atmospheric effects. The Blu-ray also holds French and Spanish 5.1 DTS mixes, as well as an English DVS 2.0 track.

2 Guns includes a good array of special features, including a commentary, some deleted material and a making-of featurette. The Blu-ray packaging includes the DVD edition as well as instructions for obtaining a digital or Ultraviolet copy. I note that the DVD does not include all of the featurette material available on the Blu-ray.Feature Commentary with Director Baltasar Kormakur and Producer Adam Siegel (AVAILABLE ON BOTH BLU-RAY AND DVD) – A scene-specific commentary is provided with Baltasar Kormakur and Adam Siegel. There’s a lot of information here, but much of it is prodded out of Kormakur by Siegel. They’re clearly happy with the movie, but there’s also a bit of residual tension over some choices made along the way…Deleted & Extended Scenes (11:50 Total, 1080p) (AVAILABLE ON BOTH BLU-RAY AND DVD) – Here we have 8 bits of deleted or extended material, almost completely from the very early parts of the movie. There’s nothing truly spectacular here, but there is one nice bit of work between Edward James Olmos and Denzel Washington that’s at least fun to see. The scenes can be viewed individually or via a “Play All” function.Click, Click, Bang Bang!: The Making of 2 Guns (30:18, 1080p) (MOSTLY EXCLUSIVE TO BLU-RAY) – This is a four-part assembly of featurettes, detailing the assembly of the movie and including a generous amount of interview material with the cast and creative staff. The first featurette, “Undercover & Into Action”, gives the background of how the graphic novels were adapted into a screenplay and how the cast was assembled. “The Good, The Bad and the Sexy” gets more into the casting, particularly in discussions with Edward James Olmos and Bill Paxton, as well as Paula Patton. “Finding the Vibe” goes into the design work of the art and wardrobe departments. “Living Dangerously” gets into the stunt work and the bigger bangs of the movie. The featurettes can be viewed individually or via a “Play All” function.DVD Edition – Included in the Blu-ray packaging is the DVD edition of this movie. It presents the movie in standard definition anamorphic widescreen with a Dolby Digital 5.1 sound mix (@ 448 kbps). The Spanish and French tracks are also in DD 5.1, and the English DVS track is included. For extras, the DVD carries the commentary and the deleted material. When it comes to the featurettes, the only one included is “Undercover & Into Action”, clocking in at 6:04, meaning that the DVD viewer is only getting 1/5 of the complete making-of material.Digital/Ultraviolet Copy – The packaging has an insert that contains instructions for downloading a digital or ultraviolet copy of the movie. The other side of the insert is an advertisement for various other Universal action movies available on Blu-ray.The movie and special features are subtitled in English, French and Spanish. The usual pop-up menu is present, including a complete chapter menu.

2 Guns is a genuine surprise in its ability to entertain, due to no small extent to the chemistry between a fairly talented cast. The Blu-ray provides a solid platform on which to see both the movie and some good extras. Fans of Denzel Washington and Mark Wahlberg will definitely enjoy this outing as a good-natured, easy ride through some fairly loud action sequences. This release is Recommended for Rental.