The winner of the Academy Award as the Best Picture of 2013, Steve McQueen’s 12 Years a Slave is an emotional workout. In its depiction of an era and in its atmosphere and tone, the film is a galvanizing experience: sometimes tender, sometimes brutal, and never dull. Its dazzling array of forceful, visceral performances and the smooth, evocative direction draw in the viewer and keep his attention riveted even when events on the screen reach stages of horrific imagery that few films nowadays dare to do. 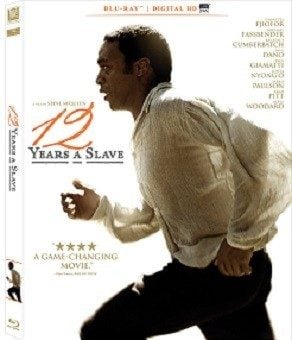 Solomon Northup (Chiwetel Ejiofor) is a successful violinist living a comfortable and loving existence with his wife and two young children in Saratoga, New York. In 1841, he’s hoodwinked by two white men trafficking in bringing free blacks into the south and selling them as slaves and is kidnapped and sold in Louisiana. Though his first master (Benedict Cumberbatch) treats him with respect and kindness, a jealous, vengeful overseer (Paul Dano) makes his position at the Ford plantation untenable, and he’s eventually sold to the drunken, brutal Edwin Epps (Michael Fassbender) who horsewhips any slave who can’t pick two hundred pounds of cotton a day. Solomon had learned early in his captivity to pretend ignorance and illiteracy, but he knows his only hope for salvation will come if he can somehow get word to his loved ones up North just where he is and under what circumstances he came to be there.On the evidence of his previous movies Hunger and Shame, director Steve McQueen is not one to turn away from misery or soft pedal ill-treatment thus guaranteeing that the picture of slavery in the Old South that we see in this film runs the gamut from kindness to butchery, from stately mansions to filthy hovels and everything in between. The film is riddled with McQueen’s long, moodily effective takes; two in particular stand out: Solomon’s near-hanging where his dangling body on tiptoes is just millimeters away from death while life goes on around him for agonizingly long minutes of screen time and the whipping to near-death of the favored slave Patsey (Lupita Nyong’o) first by Solomon (as ordered) followed by even more frenzied lashes by Epps. John Ridley’s screenplay based on Solomon Northup’s true account of his twelve years in captivity does some unnecessarily quirky time shifting early on, and one must become accustomed to the stilted, proper speech patterns the characters engage in which, even in the mouths of the more ignorant of the characters, seem a little odd. The film’s biggest flaw, however, is that the passage of time isn’t especially well handled. We know from the movie’s title that over a decade of bondage passes, but the main characters don’t seem appreciably different from beginning to end apart from a beard or some gray strands of hair. Naturally, Solomon’s children grown into adults the next time he sees them makes it clear that time has in fact not stood still. But these are things one thinks about only after the fact. During the film's running, one's attention is completely captivated by the story's through-line and the amazing cast of characters who interact with the protagonist.The performances are simply stunning throughout. As Solomon, Chiwetel Ejiofor is seldom off the screen, and his strength of character shines through at all times, even when the character is at his lowest ebb. The actor’s intelligence and nobility likewise is hard to disguise and is thus keenly appreciated or despised by the character's various masters over the years. Lupita Nyong’o’s Oscar for best supporting actress was no fluke: her face and body language tell many stories even before she utters her first words, and her two big scenes where she fully emotes her wishes (to Solomon) and her due (to Epps) certainly helped cinch the award for her. Always mesmerizing under McQueen’s direction in their previous two projects together, Michael Fassbender gives the film’s most explosive performance as the brutish Edwin Epps, justifying his harsh treatment of his slaves by quoting scripture and yet at times showing a slight streak of decency buried beneath an outward shell of cruelty, matched by his jealous, viciously malicious wife (who can also show occasional glimmers of gentility) played by Sarah Paulson. Benedict Cumberbatch and Bryan Batt make the most of their moments playing two kindly masters while also seen in brief, effective scenes are Paul Giamatti as a calculating slave trader, Garret Dillahunt as a traitorous worker, Alfre Woodard as a slave who’s risen to a privileged position, Paul Dano as the blustery carpenter who shows his true cowardice when he’s without his whip and gun, and Brad Pitt who plays a crucial role in events which transpire near the film’s end.

The film’s theatrical 2.40:1 aspect ratio is faithfully delivered in a 1080p transfer using the AVC codec. Sharpness is very good to excellent throughout with details easily glimpsed in facial features, hair, and, occasionally, the gruesome scars as reminders of the slaves’ harsh treatment. The film has a slight brownish look, possibly suggesting a long ago era, but color is well maintained and flesh tones are true. Black levels aren’t always at their inkiest, but they’re certainly deep enough to be evocative. The film has been divided into 36 chapters.

The DTS-HD Master Audio 5.1 sound mix offers a full, rich aural experience. Hans Zimmer’s music gets terrific spread through the soundstage, and atmospheric sounds have been placed wonderfully in all available channels to widen the experience and envelop the listener (the lingering sounds of those cicadas during wordless scenes simply bring the Old South into your home theater). Dialogue has been nicely recorded and has been placed in the center channel. Outstanding use of the LFE channel gives the bass in the mix quite a bit of added punch.

A memorable and haunting look at the prewar South, 12 Years a Slave tells the true story of a man who loses his freedom and fights to regain it while retaining his humanity amid the most trying circumstances imaginable. Director Steve McQueen’s visceral representation of the era of slavery won’t likely find uninvolved viewers even if some of the images are hard to watch and are aided by its heartrending final scenes. The Blu-ray release thus comes with a firm recommendation.

Thanks again, Matt. I picked this one up as a birthday buy. I look forward to watching it again closely in the confines of my home theater.

I must say that this was probably the most incredible year
for Oscar Nominated Films.

Every single film was worthy of its nomination. I don't think
I could pick one winner out of them all.

...so it comes as no disappointment that 12 Years A Slave
came out on top.

It's a fantastic film, no doubt.

Indeed, there was no loser in the Best Picture category.

And the performances were all sensational as well. Let's hope for more years like 2013.

"500 hundred pounds of cotton. Day in, day out. More than any man here! And for that I will be clean!"
T

I must say that this was probably the most incredible yearfor Oscar Nominated Films. Every single film was worthy of its nomination. I don't thinkI could pick one winner out of them all. ...so it comes as no disappointment that 12 Years A Slavecame out on top. It's a fantastic film, no doubt.
Click to expand...

Ronald...I could not agree with you more. This was, without a doubt, one of the more enjoyable Oscar runs I ever went on since I formally began doing so nearly a decade ago. For the first time since I began the run, I actually managed to see all of the (nine)nominated BP films before last Sunday evening going into the ceremonies. Thus, I was well informed in a way I had not been previously leading up to Oscar night (I missed you, BTW, at the Oscar Chat last Sunday evening ). Nary a clunker in this year's bunch. Though American Hustle was my original choice going into March 2, 2014, and I thought my dark horse, Gravity, may pull it out somehow, given the way the evening went last Sunday, I pretty much thought Slave would get it in the end, somehow, and it did. Thus, I can live with the decision as well. My BD copy of 12 Years A slave, BTW, is already home and awaiting viewing on my forthcoming birthday weekend. As I always get all the BP noms on Blu-ray Disc, 2013 is one year, in particular, in which I look forward to having them all together in my collection. Three are already in (Captain Phillips, Dallas Buyers Club and 12 Years A Slave). I look forward to picking up the remaining six titles in the coming months ahead. And even as for the four acting categories, even the two films amongst them without BP noms, Blue Jasmine (which I already have) and August: Osage County, are movies worthy of my collection and shall be duly included as well, especially when August is released, as scheduled, next month!!!! The Meryl and Julia-dominated slugfest will also be a birthday buy as well!!!!

I had seen all the nominated films except for Dallas Buyers Club.

At that point, I thought it was impossible to pick a winner.

Saw Dallas Buyers Club on Oscar day, and was just blown away. Matthew
deserved that Oscar as did Jared Leto.
T

Yes, Ron, I absolutely concur. Matthew and Jared really did well in that movie...as did Ms. Garner. Both those men earned their Oscars. Matthew, in my opinion, had it won after he collapsed at the beginning of the film prior to his diagnosis. That constitutes, to me, a knockout performance!!!! As for Jared, he was so good as Rayon that you never saw the man who collected the Oscar last Sunday night in the film not once!!!!!! Hey, he wasn't even on the cover of the Blu-ray Disc itself!!!! It took me a few days to finally realize this. That's how good Jared was in this film!!!!!And BTW, Dallas Buyers Club was the final of the BP noms I saw as well.
You must log in or register to reply here.