Character building is at the forefront and truly forms the heart of Alan J. Pakula’s Comes a Horseman.

Character building is at the forefront and truly forms the heart of Alan J. Pakula’s Comes a Horseman. With some of Hollywood’s most charismatic actors in leading roles saddled with a fairly predictable narrative amid some of the West’s most spectacular scenery, Comes a Horseman nevertheless holds one’s attention due to the interesting mix of personalities at the center of this postwar western drama.

Ruthless J.W. Ewing (Jason Robards) will stop at nothing to gain control of the entire Colorado valley where his vast ranch is located. Two surrounding ranchers refuse to sell to him: Frank “Buck” Athearn (James Caan) and Ewing’s longtime nemesis Ella Connors (Jane Fonda). Ewing has his ranch thug attempt to kill Frank and his partner Billy Joe Meynert (Mark Harmon) but only the latter dies making Frank more determined than ever to resist Ewing’s intimidation tactics. Frank and Ella agree to join forces rounding up cattle and horses in order to pay off their debts to banker Virgil Hoverton (Macon McCalman). Even oil company executive Neil Atkinson (George Grizzard) dangling rich potential oil rights on their properties doesn’t deter the pair, now a romantic couple, from paying off their debts using their own skill and moxie.

The screenplay by Dennis Lynton Clark is so spare (greedy land baron versus noble, struggling ranchers) that it could have been fleshed out and wrapped up thoroughly in ninety minutes or less, but this nearly two-hour wallow in some of the most gorgeous natural topography in our country gets stretched to the breaking point by including a saloon brawl (instigated by a couple of Ewing’s hired goons played by Jim Davis and James Kline trying to bring down Athearn), a most impressively shot cattle stampede during a rousing prairie thunderstorm, a calm-before-the-storm square dance (shot with awesome circular camerawork), and several montages of the pair and their grizzled hired hand Dodger (Richard Farnsworth) rounding up cattle and horses running wild through the massive plains and timberlands of the region. (With the great director of photography Gordon Willis responsible for the achingly beautiful cinematography, one really doesn’t mind the narrative being so notoriously extended.) Though we eventually learn that the period is not that of the Old West but rather 1945 (so rickety cars ride alongside beautiful, galloping steeds on the dirt trails), the sense of atmosphere established by director Alan J. Pakula and cinematographer Gordon Willis is palpable, and the oppressively hard life on the trail and at home doing ranch work is never in doubt.

James Caan seems born in jeans and chaps. Famous for his skills as a cowboy away from the Hollywood klieg lights, Caan seems right at home riding rambunctious horses and hogtying steers for branding. His Buck Athearn is the real deal. Jane Fonda gets down and dirty as a determined, defiant woman close to the land who’ll fight to the death to retain what’s hers, and she and Caan make a believable pair of cowpokes despite their glamor and terrifically toned bodies. Jason Robards can’t do much with J.W. Ewing, evil and cutthroat through and through though the actor does admirably underplay rather than chewing the scenery obviously knowing his role was completely one dimensional. Richard Farnsworth earned an Oscar nomination for his folksy, agreeably hard-working Dodger and earning the dignified end for his character that kept him in one’s thoughts throughout the movie. George Grizzard has some fun with the ambitious oil company executive eager to start drilling in the valley, and Macon McCalman does well with the easygoing banker trying to give Ella every break to pay back the money she owes the bank. Three famous faces have little more than cameos in the movie: Jim Davis as one of Ewing’s hired thugs, Mark Harmon as the harmonica playing sidekick to Buck, and James Keach as another hired gunman who meets a surprising end.

The Panavision theatrical aspect ratio of 2.35:1 is faithfully rendered in a 1080p transfer using the AVC codec. MGM has done little to no clean-up with their source material, and the film is indeed littered with specks and small scratches fairly consistently. Yet, the sharpness is not compromised for a moment with the image offering crisp details throughout. Color timing seems to have eased off a bit in terms of saturation levels (memories of the theatrical screening I originally attended had much more tanned flesh tones and richer greens than are presented here). Color here is controlled and most pleasant. Black levels can be very striking. The movie has been divided into 24 chapters.

Even for a mono track of this era (presented here in DTS-HD Master Audio 2.0), there is excellent fidelity in the offing. The cattle stampede sequence in particular reveals thundering bass, and all of the atmospheric effects in the movie (a squeaking windmill, gushing water through a hose, a rampaging fire at the climax) have a heft that comes across outstandingly. Dialogue has been well recorded, and the tender music score by Michael Small is also threaded through the audio track with surety.

Six-Page Booklet: contains some color stills, original poster art on the back cover, and film historian Julie Kirgo’s exemplary analysis of the movie.

Comes a Horseman may not blow one out of his seat with a great dramatic story filled with twists and turns, but the beautiful stars and the gorgeous countryside where they act are great compensations even with a less than pristine video transfer (hence the reduced price offered by Twilight Time). There are only 3,000 copies of this Blu-ray available. Those interested in purchasing it should go to either www.twilighttimemovies.com or www.screenarchives.com to see if product is still in stock. Information about the movie can also be found via Facebook at www.facebook.com/twilighttimemovies.

Quigley Down Under Blu-ray 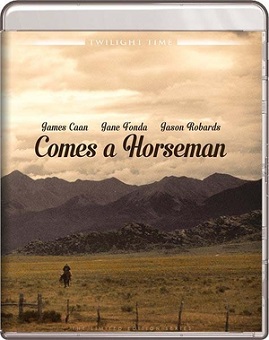