Forum List What's new Dark Style Change width
Log in Register
What's new Search
Menu
Log in
Register
Navigation
Install the app
More options
Dark Style
Close Menu
Posted on May 7, 2019 by Sam Posten
You are using an out of date browser. It may not display this or other websites correctly.
You should upgrade or use an alternative browser.
I gave you Lord of the Flies. All the answers are in that book. 3.5 Stars 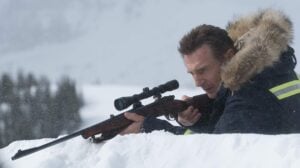 When Kehoe citizen of the year, plow driver Nels Coxman’s (Liam Neeson) son (Micheál Richardson) is killed as collateral damage in a drug deal gone wrong, he decides to start working his way up the dealer’s corporate ladder. First he kills the thug who who kidnapped his son directly, then he uses the information from that kill to go up the Denver bad guy chain. (Kehoe, a fictional, snowed-in Colorado town, and Denver are connected solely by the long stretch of highway that Nels regularly keeps clear). He’s always been a quiet man but Nels’ rage and emptiness cause his wife (Laura Dern) to leave him, and eventually he runs out of low level creeps to take out and so enlists his brother Brock (William Forsyth) aka ‘Wingman’ to help him reach the top of the list, Trevor ‘viking’ Calcote (Tom Bateman). Viking’s crew blames the missing lieutenants on the work of rival gang of Native Americans led by White Bull (Tom Jackson) while local cops (Emmy Rossum and John Doman) start picking up clues third hand. Ultimately, Nels, the Viking crew, the cops, Native American gangsters, a hitman, and even Viking’s own young son are headed for collision. 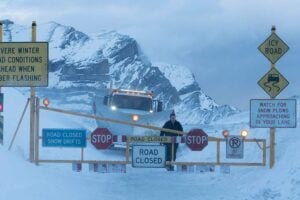 Stop me if you’ve heard this one before. Liam Neeson plays a guy who has had a family member killed or taken, and follows the bad guys to the ends of the earth to bring them to justice, or at least revenge. He’s got a particular set of skills, even if he is just an ordinary guy. He’ll even cross impassible snowy wilderness in pursuit of his targets. You’d be forgiven for assuming that Cold Pursuit follows the typical Liam revenge plot, but what we actually have is a lot more complicated, and in many ways more fun. Cold pursuit’s influences are just as much Oscar Wild and any of the Coen Brother’s oeuvre as much as they are “Taken, but in the snow”. 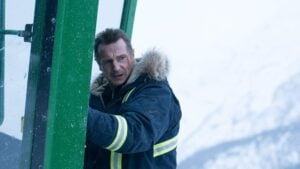 Cold Pursuit is a remake of the Norwegian film “In Order of Disappearance” starring Stellan Skaarsgard, which you can see on Netflix right now:

It’s more grimly funny than any of the taken series, and recounts how Nels ‘disappears’ those who have done him wrong. It’s also set up so that no matter who wins in the final confrontation, there’s sure to be blood all around.

And it got destroyed and quickly buried at the box office. First, well Neeson admitted some dark facts from his past that overshadowed the film. And the marketing couldn’t get past the obvious “Taken in snow” angle. And, well, it’s complicated to really tell audiences what the film is like without giving away too much.

But -I- liked it, despite it’s flaws. It’s no Taken. But it’s no Phantom Menace either. It’s got an intriguing structure, a bad guy you REALLY want to see get his due, a kid that know’s he’s in trouble and still worms his way into Nels’ and our hearts, and the best “F you I know you are gonna kill me so I’m gonna insult you until you do” scene since Walken vs. Hopper in True Romance.

I have questions. I have concerns. I see plot holes. And still I went with it and found it fun. I bet other HTFers will too.

Shot on Arri Alexa in 2.8K, Cold Pursuit has been graded with a dark but filmic look. It’s relatively sharp and noise free, but it’s no demo material. This UHD has a Dolby Vision encode but minimal use of HDR, which is puzzling. I watched in in HDR10 via projector, so maybe that additional layer will be worth it to you who watch on OLED. There’s a lot of night shoots and they come across detailed and suitably gritty. Balancing these out are the wide vistas of frozen Colorado snowscapes and wonderfully composed shots of the plow trudging through deep snow banks with lines of traffic trailing. Again it looks suitable for the look they are going for. 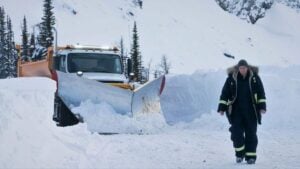 I was also pleased with the wide and deep soundscape that this Atmos track brings. The score washes past the listening position with ease, and echoes into the rears realistically. There’s not as much action as you might expect until we get to the final act, but gunshots, heavy machinery, snow storms and other environmental sounds all flow wonderfully through out the room. Special shout out to George Fenton’s string heavy soundtrack, which is airy in places and gripping in others. I especially liked the mix of mandolin and theremin on tracks like the end credits and the ticking clock effect used in ‘Closing In’. 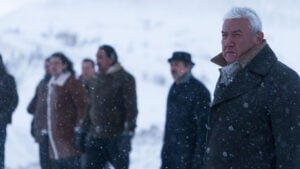 All were enjoyable and worth the time.

Overall I have to admit Cold Pursuit was not what I was expecting, at all, and was way better for it. The noir influences and checklist structure kept me interested and the great soundtrack had me hooked. I dunno that I’d bite at Lionsgate’s ridiculous $43 list price, but this disk is a fun combination of revenge plot mixed with with wrong accusations amping up drama between deadly forces. It didn’t deserve to get the bum rush at the box office, even if Neeson’s admissions were way out there. 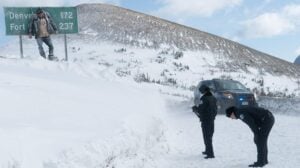 Have not yet seen it, but "In Order of Disappearance" is VERY well done with excellent cinematography, acting, and directing. Difference is, not humorous in the least.

It's on my list for this weekend @Richard V thanks!

Wow @Richard V I was not prepared for how close shot for shot these two films are! Anyone who liked one will like the other. I particularly was tickled when Tormund Giantsbane showed up =)

The english dubbing is terrrrrible tho, almost in a comical way.

Sam Posten said:
Wow @Richard V I was not prepared for how close shot for shot these two films are! Anyone who liked one will like the other. I particularly was tickled when Tormund Giantsbane showed up =)

The english dubbing is terrrrrible tho, almost in a comical way.
Click to expand...

I saw it with English subtitles and original Norwegian Dialogue

Richard V said:
I saw it with English subtitles and original Norwegian Dialogue
Click to expand...

I’ll have to check that out

I watched the 4K stream (Dolby Vision/Dolby Atmos) on iTunes tonight and had a whale of a good time. Yep, there are plenty of plotting lapses, and yet I just turned off my brain and settled in to enjoy the gorgeous scenery and creative mayhem. And the little boy really does worm his way into your heart without the cutsey "movie kid" tropes that are an automatic turnoff for me.
You must log in or register to reply here.