Forum List What's new Dark Style Change width
Log in Register
What's new Search
Menu
Log in
Register
Navigation
Install the app
More options
Dark Style
Close Menu
Posted on March 6, 2018 by Todd Erwin
You are using an out of date browser. It may not display this or other websites correctly.
You should upgrade or use an alternative browser.
Even more colorful in 4K 4.5 Stars

Recently winning the Best Animated Feature Oscar at the 90th Academy Awards, Coco is, quite possibly, Pixar’s most colorful and beautifully animated feature to date. Disney’s Ultimate Collector’s Edition contains the film on 4K UHD Blu-ray and Blu-ray, plus an extra Blu-ray disc full of extras, and a digital copy (in 4K) to boot.

Miguel (Anthony Gonzalez) desperately wants to be a musician, but his family of shoemakers has forbidden music of any kind ever since his great-great grandfather abandoned the family to pursue a career of music, leaving Miguel’s great-great grandmother Imelda (Alanna Ubach) to raise their daughter Coco by herself. To make matters worse, the family has all but erased all memory of this supposedly deadbeat father, refusing to mention his name and removing him from all family photos, leaving only Imelda posing with Coco and a torso of her husband in the photo the family displays every year during Dia de los Muertos. Miguel, though, is a determined and rather stubborn young boy, teaching himself guitar by watching old movies starring the town’s music legend Ernesto de la Cruz (Benjamin Bratt) and shining the shoes of the town’s mariachis. The town holds an annual music festival in the town square on the evening of Dia de los Muertos in honor of de la Cruz, but when Miguel’s grandmother Abuelita (Renee Victor) finds out that Miguel wants to enter, she destroys his guitar as Miguel mistakenly takes the photo of Coco and her parents and runs away. Needing a guitar for the festival, Miguel breaks into de la Cruz’s shrine and steals his guitar, sending him to the land of the dead. Miguel finds his deceased family, who offer him their blessing as a way to return home, provided he drops all aspirations of music forever. Refusing to do so, and believing that de la Cruz is his great-great grandfather, Miguel begins a journey to find him and ask for his blessing, joined by Hector (Gael Garcia Bernal), who will disappear from the land of the dead forever as memories of him in the land of the living have been fading and are just about non-existent. Miguel must find de la Cruz and get his blessing before dawn, or be stuck in the land o the dead forever.

I had rather low expectations of Coco based on early trailers and the subject matter. This was a movie centered around a Mexican holiday that some find a bit creepy, plus it was a musical, something Pixar had always shied away from. It is also subject matter that I do not think may be appropriate for younger children (especially when Miguel discovers the true nature of de la Cruz). The story is also very predictable – it was rather obvious to me who Hector was shortly after he was introduced, and had a solid hunch about de la Cruz. It is the very colorful production design during Miguel’s journey in the land of the dead and the overall fluid and often lifelike animation of its characters. Coco, although not photo-realistic, is a marvelously and realistically animated human character in her subtle movements and facial expressions, as is Miguel. The movie also quite often reminded me of the old LucasArts computer game, Grim Fandango, which was an often darkly comic mystery game set in the land of the dead. Coco is a technical achievement for Pixar, but lacks a strong storyline that is the studio’s trademark.

After some delay, my 4K UHD Blu-ray copy of Coco has arrived for review. As I had suspected in my Blu-ray review, what was already a colorful film is even more so in 4K, despite possibly being an upscale from a 2K digital intermediate (IMDB is extremely vague). Detail gets a slight uptick, with more refined textures in fabrics and surfaces. It is the wider color gamut that makes this disc outperform its 1080p Blu-ray counterpart, with more varying shades of colors in what is an even more colorful land of the dead. Contrast is better controlled, with deeper blacks that retain strong shadow details.

Coco on 4K UHD Blu-ray defaults to an English Dolby Digital 5.1 track encoded at 640 kbps. There are also Dolby Digital Plus 7.1 (at 1.0 Mbps) and Dolby Digital 2.0 stereo (at 320 kbps) English tracks to choose from in addition to Dolby Digital Plus 7.1 options in Spanish and French and Dolby Digital 2.0 Descriptive Audio. The real highlight, though, is the Dolby Atmos 7.1.4 track (with, ironically, a Dolby TrueHD 7.1 core). I viewed the film in my 5.1.2 Atmos room and selected the Dolby Atmos. The result was a nicely immersive experience. The front soundstage was wide and expansive, with dialogue panning along with the character’s movements on screen. Surrounds were very active, adding atmosphere such as crowd noise during quieter passages and more discrete effects like the spiritual guides flying overhead during more active sequences. A wonderful overhead effect occurs at the beginning of chapter 10, as a tram travels above the listener from the rear to the front of the room. Dynamic range is excellent, adding greater fidelity and spatiality to much of the music and songs featured in the film. Dialogue is always clear and takes priority over other elements in the mix. I just wish Disney would start including commentary tracks rather than the numerous, and often redundant additional mixes (7.1, 5.1, 2.0, etc.) on these more recent theatrical releases.

This is a three disc set, with the feature on both 4K UHD and Blu-ray, and the bonus features spread over the two Blu-ray discs (one is dedicated solely to special features). There are no special features on the 4K UHD disc.

Feature Disc (Blu-ray)
Feature Commentary: Director Lee Unkrich, Co-Director Adrian Molina, and Producer Anderson discuss the making of the film, their research trips to Mexico, and various other aspects of the production.

Welcome to the Fiesta (1080p; 2:16): A “proof of concept” short showing the look of the film, with optional commentary.

Mi Familia (1080p; 10:00): Crew members discuss many of the odd and strange rules their families had while growing up.

Dante (1080p; 6:14): A look at the design of Miguel’s street dog and the hairless Xolo street dogs that inspired him.

How to Draw a Skeleton (1080p; 3:18): As the name implies, a quick demonstration on how to sketch a simple skeleton.

Paths to Pixar: Coco (1080p; 11:44): Several crew members discuss their dreams and ambitions and how they found a job at Pixar.

How to Make Papel Picado (1080p; 2:19): A very quick demonstration on how to create the cut-out paper designs featured prominently in the opening and closing credits as well as throughout the film.

You Got the Part! (1080p; 2:12): Anthony Gonzalez was originally brought in to scratch voice the character of Miguel, and this short documents how he was notified that he officially got the part of Miguel.

Digital Copy: An insert contains a code to redeem a digital copy on Movies Anywhere. I received a UHD version on Vudu, HD on Google Play Movies, Movies Anywhere, and Amazon Video.

Coco earns high marks mostly for its technical achievements rather than its story content. Video and audio are a slight improvement over the Blu-ray release. 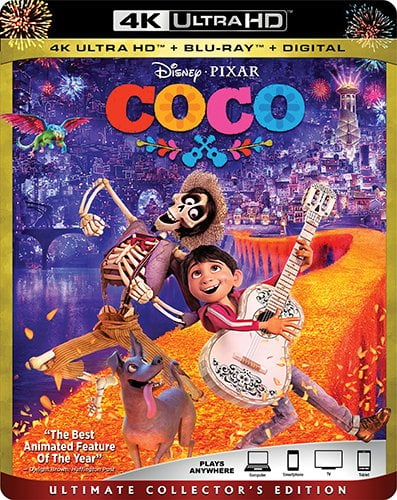