In the 1980’s, Sylvester Stallone was arguably one of the biggest stars in Hollywood; the emergence of the Rambo franchise as well as the continued success of the Rocky sequels (III and IV to be precise) played a big part in that. Also during that decade, Cannon Films – under the leadership of Menahem Golan and Yoram Globus – consistently turned out a high volume of movies that have gone on to become cult favorites. The union of these two produced Cobra, a vehicle that played to Stallone’s strengths as well as befitting of the company’s style of entertainment. Previously released by Warner Bros. on both DVD and Blu-ray, Shout Factory – via the Scream sub-label – has licensed the film and given it the Collector’s Edition treatment.

Lt. Marion “Cobra” Cobretti (Sylvester Stallone) is the go-to guy on LAPD’s “Zombie Squad” for the jobs that police are unable to take on their own; his modus operandi is simple: eliminate the threat at any cost. It’s that kind of approach that will be needed since the city is besieged by a violent killing spree orchestrated by a man known only as The Night Slasher (Brian Thompson) and carried out by his like-minded group of followers known as “The New World”. When model and businesswoman Ingrid Knutson (Brigitte Nielsen) inadvertently witnesses one of the brutal killings, she comes a target and Cobra is assigned to protect her. With a laser mounted sub-machine gun and his pearl handled Colt .45 at his disposal, Cobra is well equipped to put and end to The Night Slasher and the nefarious organization once and for all!

Taken from ideas Stallone had written for Beverly Hills Cop (when he was briefly attached to the project) as well as the novel Fair Game by Paula Gosling, Cobra is – for what it’s worth – a fairly straightforward action film that does deliver on its basic premise. The action scenes are indeed exciting and well-staged and the film really does come alive during those sequences. The major flaw with the film is, by far, the plotting; we never truly get to know about the characters or their backgrounds and motivations (largely due to the fact that much of these expository scenes were trimmed along with the more gruesome bits prior to theatrical release), making it look like they just going through the motions without any real explanation why. The end result is that the plot comes off as mostly disjointed, although director George P. Cosmatos does his best to gloss over that with a degree of style – which is effective in several scenes. So, while the well-staged action in Cobra is a huge reason why it has attained cult status (the melding of police thriller and slasher film elements like an American poliziotteschi film doesn’t hurt either), it’s inconsistency in plotting has largely kept it from attaining higher status in the action genre.

Sylvester Stallone adds to his long resume of action movies with a mostly solid portrayal of the title role; think of his character as the Rambo of the LAPD and you’ll get the idea of what he was going for. Brigitte Nielsen basically fills the “damsel in distress” part as Ingrid; we also get to see her showcase her modeling style in a stylistic montage set to the song “Angel of the City”. Brian Thompson makes for one of the most repellent villains of the decade as The Night Slasher; with an exception for a long speech during the climax, his character mostly leers and slashes during his time on the screen. Other notable appearances and performances include Andrew Robinson as Cobra’s main rival on the force, Reni Santori as Cobra’s partner, Lee Garlington as an LAPD officer with ties to The New World, Art LaFleur as Cobra’s superior officer, Val Avery as the chief of police, and Marco Rodriguez as the crazed grocery store gunman at the beginning of the film.

The film’s original 1:85:1 aspect ratio is presented in a new 2K scan of an archival interpositive (billed on the cover as the “Original Film Elements”). Film grain is strong and organic with fine details presented strongly; colors are also strong with even skin tones and mostly inky blacks with minimal instances of age related artifacts. All in all, this is an improvement on previous home video incarnations and likely represents the best the film has looked on home video.

There are two soundtrack options for the movie: a 5.1 DTS-HD Master Audio track (the default option) and a 2.0 DTS-HD Master Audio track. Both have strong dialogue with sound effects and the music given great fidelity without being intrusive on each other. In terms of which track to go with, the 5.1 track is likely your best bet, as it maximizes your sound system to the fullest, and the 2.0 track is for the purists who prefer to hear the movie as it sounded back upon initial release. Whatever your choice, you can’t go wrong, as both represent the best the movie has ever sounded on home video.

Commentary by director George P. Cosmatos – Ported over from the Warner DVD (and subsequent Blu-ray), the director goes over the movie. While he does employ a kind of play-by-play style (sorta like William Friedkin), he does provide some insight into stylistic choices as well as what was cut from the movie prior to release; an interesting track, to say the least.

Stalking and Slashing – An Interview with Brian Thompson (26:00): The actor – who played The Night Slasher – goes over his memories of the project as well as some interesting experiences with Stallone in this newly recorded interview.

Meet the Disease – An Interview with Marco Rodriguez (24:04): The actor who played the grocery store shooter at the beginning of the film reveals his time on the movie as well as how the scene originally played out in the script in this newly recorded interview.

Feel the Heat – An Interview with Andrew Robinson (14:15): The actor who played Detective Monte recalls his memories of the movie, including an alternate ending that didn’t make the final cut, in this newly recorded interview.

Double Crossed – An Interview with Lee Garlington (9:04): The actress reveals how she got involved with the project and some her memories, including a humorous moment during shooting the climax, in this newly recorded interview.

A Work of Art – An Interview with Art LaFleur (8:23): The actor – who portrayed Cobra’s superior officer – shares some fond memories of the cast and the movie in this newly recorded interview.

Still Galleries – Two galleries are presented here: a gallery of production and behind-the-scenes stills (53 photos at 4:34) and a poster and lobby card gallery (62 photos at 5:19).

While Cobra was largely criticized for its plot and some of the more violent elements, audiences didn’t seem to mind as it was a huge hit at the box office during its initial release. Shout Factory has done a great job in giving the movie a solid Collector’s Edition Blu-ray; while some fans of the movie may lament the absence of the deleted scenes or a longer cut, the audio and visual quality of the feature as well as some solid new bonus features help compensate for the omission. Recommended for fans of the movie and of Sylvester Stallone in general. 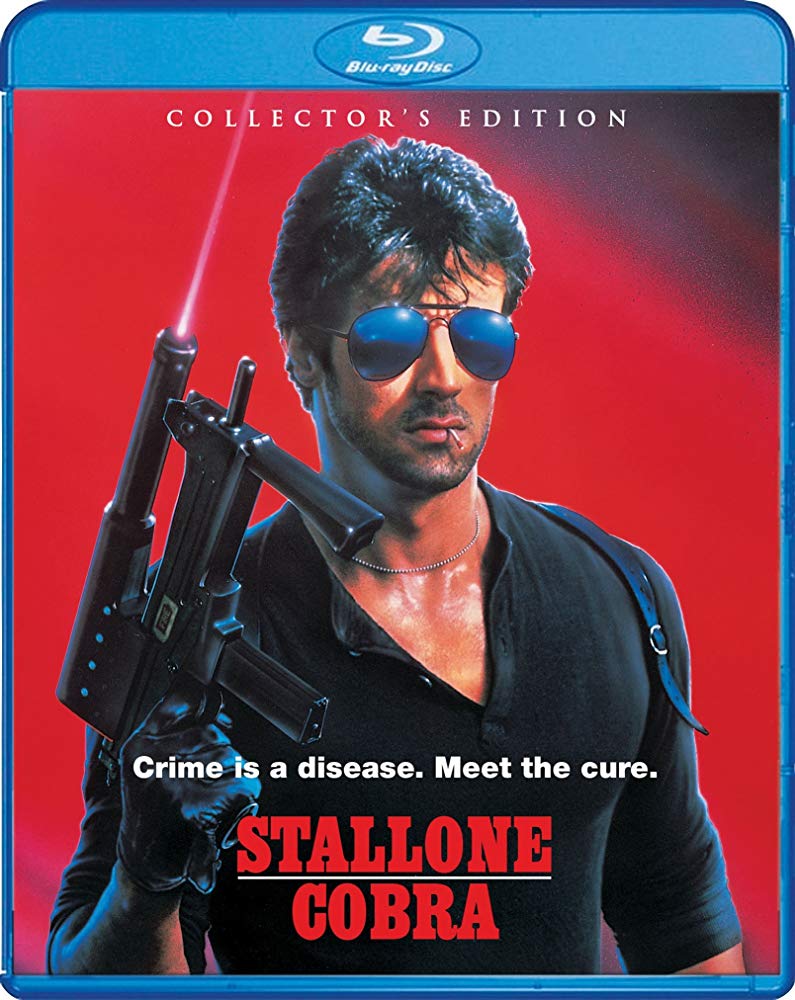